Hong Kong — Extradition bill withdrawal fails to pacify protesters | Asia | An in-depth look at news from across the continent | DW | 06.09.2019 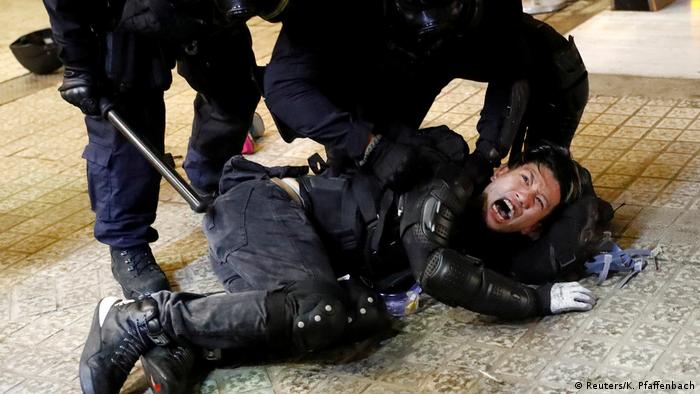 Hong Kong's anti-extradition bill movement will be three months old on September 9. In the past few months, the mass protests in the city have undergone a transformation — from peaceful demonstrations to violent clashes between the protesters and Hong Kong police.

Recently, riot police chased and beat up protesters and passengers at the Prince Edward metro station, with eye-witnesses reporting about police brutality.

Chi-Fai Ng, the chairperson of Hong Kong's Chef Union, told DW he was on his way home when his train was cancelled and all passengers were asked to leave.

"Two minutes after the MTR staff announced the station was closed, the riot police descended on the platform and started chasing protesters in black shirts," said Ng, adding that the security officials attacked protesters and started hitting them with batons.

"The way police used force that night, I was worried that someone would die," he said.

Other passengers spoke about a similar police crackdown.

"I saw police pushing a protester toward a wall," Chan, a passenger, told DW. "Then many police officials jumped on top of him and started hitting his head with batons. I was standing very close to him, and I was afraid that they would beat him to death."

The police crackdown in Hong Kong has intensified over the course of the past three months. Now violent clashes between protesters and police occur on a weekly basis. Experts say that the use of force by Hong Kong's police has tarnished their image and enraged protesters.

"Hong Kong's police were considered the best in Asia, and the citizens respected them," Lynette Ong, an associate professor of Political Science at the University of Toronto, told DW. "Their brutal actions have damaged their reputation. It will have an impact on how the people in Hong Kong view the city government," she added.

"Following the incident in Yuen Long, when local triads indiscriminately attacked passengers at a local metro station, protesters started chanting 'dark society' (a term used for local gangs or triads in Cantonese) whenever they see police. They implied that triads were backed by police," Ong underlined.

"The government will formally withdraw the bill in order to fully allay public concerns," Lam said in a video statement released via her office.

The bill, which sparked months of violent protests, would have allowed individuals from Hong Kong accused of having committed crimes in mainland China to be extradited and tried there.

Experts say the government's actions in recent months have eroded the public trust in the city administration. That is why when Lam announced that she was officially withdrawing the controversial extradition bill, the protesters were not satisfied. They said they would not stop protesting until all of their demands were met. Unsurprisingly, one of the five demands by protesters includes an independent probe into police brutality.

Ong says the current situation in Hong Kong could push some protesters to use more radical measures, as they believe it is the only way to pressure the government.

"Some people believe that violence in Hong Kong could force Beijing to pay attention to the situation in Hong Kong," she said.

Ong warned that Hong Kong is on a path of "no-return," as she sees no immediate solution to the crisis, which is not just about the extradition bill. Even if the current protests subside in the coming weeks, the resentment will not go away, she added.

During the public announcement, Lam also pledged that the government would support an inquiry by the Hong Kong Independent Police Complaints Council into police brutality, which would be joined by overseas experts and two government appointees.

However, this is short of the key demand from Hong Kong protesters that an independent inquiry, led by a judge, should be launched. Nearly 1,000 protesters have been arrested during the protests and many injured.

Lam also added that she would like to set up public dialogue, liaising with community leaders and academics.

"What happened in the last two months has shocked and saddened the Hong Kong people and made everyone upset about Hong Kong," she said.

However, for Joshua Wong, a prominent pro-democracy activist, the measure to withdraw the bill was "too little, too late." He called the move a "tactic" and urged the world not to be deceived by the Hong Kong and the Beijing governments. "They have conceded nothing in fact, and a full-scale clampdown is on the way."

The protracted trade dispute between the US and China is affecting other countries as well, Merkel has told the Chinese premier. The German chancellor also stressed that a peaceful solution is needed for Hong Kong. (06.09.2019)