The banned march marks the fifth anniversary of Beijing's rejection of a call for universal suffrage. Some protesters threw petrol bombs at police, who responded with tear gas and water cannon. 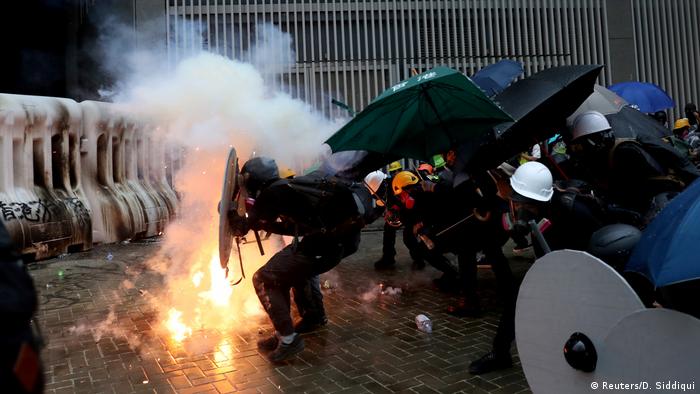 Defying a police ban, tens of thousands of people had gathered for a circular march around Hong Kong island's central business and government districts.

The main protest was organized to mark the fifth anniversary of China's decision to not allow fully democratic elections in Hong Kong, the decision that sparked the so-called Umbrella Movement.

A large group of demonstrators hurled Molotov cocktails and bricks at police as they attempted to push back those gathered outside the Legislative Council building. Protesters also built makeshift barricades and set fires on the streets, which were later put out by firefighters.

Police responded with tear gas and water cannon. The water cannon unleashed blue-dyed water, a method that is traditionally used elsewhere to make it easier for police to identify protesters later.

Saturday's protest took place a day after several leading activists, including two of the Umbrella Movement's leaders, Joshua Wong and Agnes Chow, were arrested in a sweeping crackdown. 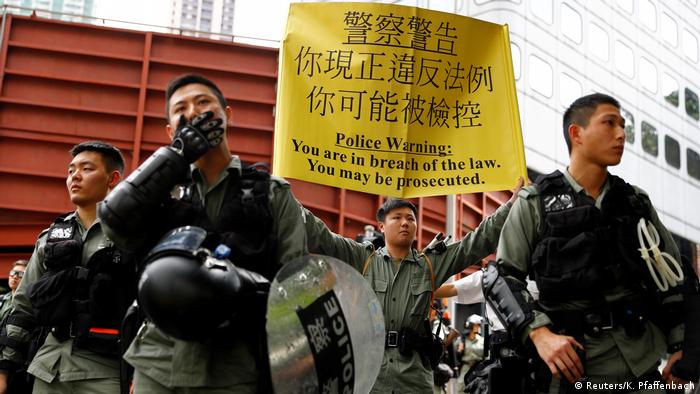 Saturday's march was not authorized by police

They stand accused of "inciting others to take part in unauthorized assembly" among other charges.

Lawmakers Cheng Chung-tai, Au Nok-hin and Jeremy Tam were also detained for their roles in "obstructing" riot police from clearing protesters from the streets.

Saturday's march was not authorized by police on security grounds, after last weekend's protests saw some of the most violent clashes in three months of political turmoil.

Earlier in the rally, many participants carried Christian crosses and sang "Hallelujah," in an attempt to represent the event as a religious gathering. This was an effort to sidestep the ban, as religious marches are protected in Hong Kong.

As coordination has been affected by the arrest of its leaders, protest movement organizers pushed the slogan "be like water," encouraging protesters to be flexible during demonstrations. 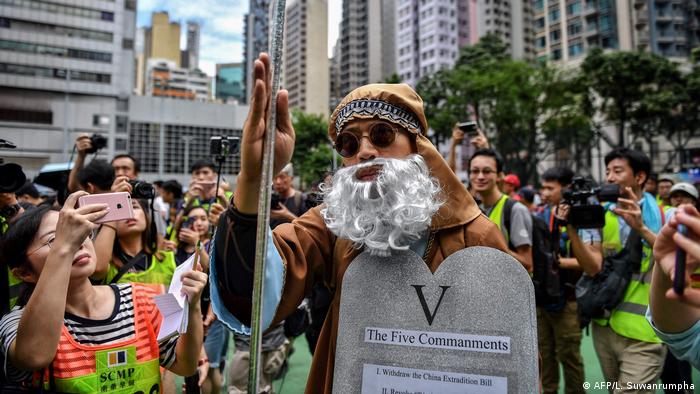 More than 900 people in Hong Kong have been arrested in connection with protests since they first broke out in June.

Protesters are demanding more democratic freedoms and for embattled Beijing-backed leader Carrie Lam to step down.

But Hong Kong's government — with the force of Beijing behind it — has remained firm and refused to back down over the protests, despite the fact that the protest movement has mobilized millions of people.

The arrest of several prominent pro-democracy activists raised concern among EU foreign ministers. With Chinese soldiers stationed at the border with Hong Kong, Europe has warned against any further escalation. (30.08.2019)

Pro-democracy activist Joshua Wong was released hours after police "forcefully" pushed him into a car. It has emerged that Beijing rejected the Hong Kong government's plans to withdraw a controversial extradition bill. (30.08.2019)

A Hong Kong police officer has fired his weapon to disperse angry demonstrators chasing him with rods. Police confirmed that 36 people were arrested after peaceful protest turned violent. (25.08.2019)