Sieren's China: In Hong Kong, it's time for compromise

Beijing is not doing itself any favors with its current tactics dealing with protesters in Hong Kong. Frank Sieren thinks the concerns of the protesters should be addressed and resolved. 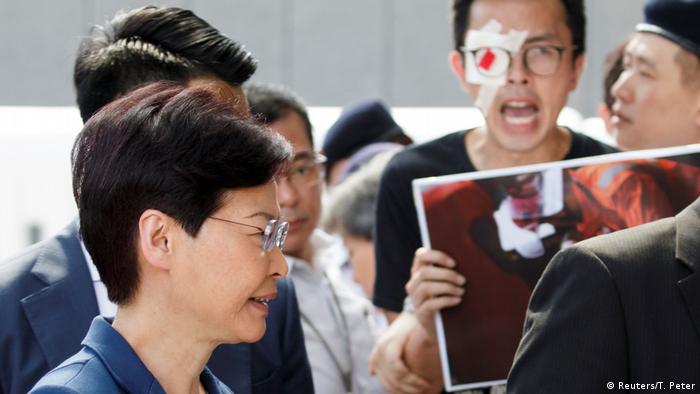 Two months in, protests in Hong Kong continue unabated. Last weekend, a shot rang out in one of the increasingly violent clashes, but nobody was hurt. A police officer who felt threatened by the protesters shot into the air in an attempt to make his escape, showing just how tense the situation has become.

Yet, at first glance, protesters don't appear to be asking for the impossible. They want the local government to fully withdraw the extradition bill that triggered the protests in the first place, not only for it to be put on the back burner, as Hong Kong leader Carrie Lam has done so far. They also want an independent investigation into alleged police violence, which could help abate the current heated situation and allow for talks between the government and protesters.

Protesters have no illusions that there will be free elections in Hong Kong any time soon, and most also know the city would grind to a halt if it were to be cut off from mainland China. Only a radical minority is calling for independence — the majority of protesters want to maintain the status quo. They want an independent judiciary, as well as the press freedom guaranteed by the Basic Law negotiated with the British government before it transferred sovereignty over Hong Kong to China in 1997. Eventually, they would also like the head of government to be directly elected. This would be a first. But right now, above all, they just want to be heard.

However, Lam has appeared reluctant to make any concessions. "It is not the question of not responding; it is a question of not accepting those demands," Lam said during a press conference on Tuesday, after a meeting with about 20 protest leaders and Lam that did not amount to much.

An opinion piece in Hong Kong's South China Morning Post responded: "Arguably, if the government had valued dialogue with the public, if the chief executive had cared what people were thinking and feeling, we wouldn't be in this inferno in the first place." This is proof, at least, that there is still freedom of the press in Hong Kong.

Lam's problem is that if she decides to withdraw the extradition bill completely, she will be indirectly admitting that she made a mistake by agreeing to Beijing's demands. An independent police investigation would also contradict Beijing's narrative that the peaceful demonstrators are "criminals" and "terrorists."

Therefore, Lam has decided to wait and hope the flames of protest fizzle out, and that other citizens lose patience with the chaos. But her strategy likely won't work — protesters have the feeling that this is their absolute last chance to shift the situation in their direction. Added to that is the pressure from the international media, which sees the protests as a proxy conflict between authoritarian China and the free world.

A one-sided view from China is not helping demonstrators believe that their demands are being taken seriously. The situation seems like a classic argument between spouses: After venting much anger and resentment, the two will have to apologize and take back plenty of nasty statements before being able to hold reasonable talks with one another. In a recent ad that appeared in more than 30 international newspapers, activists implied that Hong Kong was close to becoming a police state. This, of course, is an exaggeration.

A reversal of the situation

A commenter on the website of China's state newspaper China Daily wrote: "Hong Kong would be nothing without China." This was also an exaggeration. When China opened up its economy in 1980, Hong Kong was already one of Asia's most successful states. Many people on the mainland forget that China's rise was largely thanks to the legal stability of the former British crown colony, which acted as its gate to the West for at least two decades. On the other hand, few have forgotten that the people of Hong Kong looked down on them for several decades.

Now that China is successful, many of its citizens look down on the citizens of Hong Kong, whom they think are too demanding in light of the current situation. Indeed, the city is lagging in certain areas. Shenzhen, on the mainland, is much more innovative than Hong Kong today — unimaginable just 15 years ago. Many Chinese citizens who use virtual private networks to read the international media think Hong Kongers are asking for too much, considering they already have many more freedoms than those living on the mainland. This lack of understanding can be likened to the situation between Germans from both sides of the former East-West divide, who even today aren't always able to understand the other side's perspective.

Some people on the mainland wouldn't be against a military intervention in Hong Kong, though it's unlikely that the situation will escalate to this extent. Beijing has other methods to apply pressure on Hong Kongers, the economy being one. Protests that continue to drag on will only drive away tourists, and new internet startup banks on the mainland could move to take away business from Hong Kong's leading financial institutions.

An economic downturn would result in less sympathy for the protesters from the other citizens who aren't out protesting in the streets. And yet, such pressure will not address the concerns and fears of people in Hong Kong. It would make more sense for Beijing to reestablish the principle of "one country, two systems" — and that goes for Taiwan, too.

The Hong Kong government also has to find answers to the horrendous real estate prices, the gaps in the social system and the growing divide between the rich and ordinary citizens, as well as a lack of opportunities for young people. The money is there; what's missing is political will.

Above all, it's high time that people in Hong Kong and on the mainland dismantle their mutual prejudices. The people of Hong Kong should acknowledge the opportunities afforded by the boom in southern China, and the people in southern China should recognize there are many advantageous aspects to Hong Kong that will help boost the region's general development. This includes the rule of law.

China's economy is growing more slowly than it has over the past almost 30 years. But if we focus only on this fact, we are underestimating the real challenge, says DW's Frank Sieren. (21.07.2019)