A Hong Kong police officer has fired his weapon to disperse angry demonstrators chasing him with rods. Police confirmed that 36 people were arrested after peaceful protest turned violent. 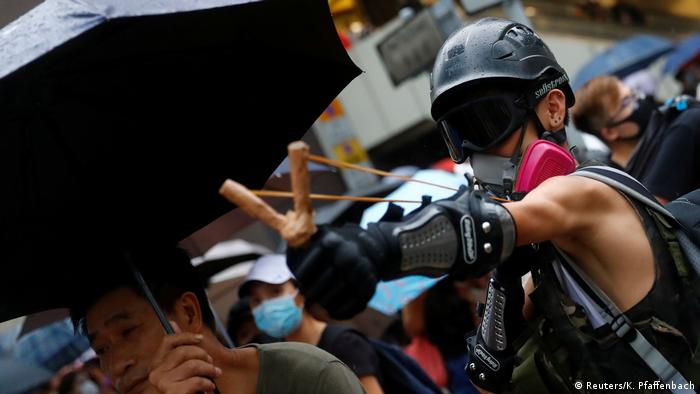 Police said Monday that they had arrested 36 people, the yougest being 12 years of age, during the pro-democracy protests on Sunday in Hong Kong that turned violent and prompted a police officer to fire his weapon for the first time since demonstrations erupted in June.

Tens of thousands of protesters rallied peacefully during heavy rain at a sports stadium in the Kwai Chung area of the city on Sunday. A hardcore group then took over a major road in the neighboring Tsuen Wan district, erecting makeshift roadblocks and digging up bricks from the pavements. Some also threw petrol bombs at the police.

To try to regain control, authorities hoisted large banners to warn protesters of the impending use of tear gas and water cannon.

Several rounds of the chemical were subsequently deployed. Authorities then fired the water cannon jets, the first time they have been used since the regular protests began in March. The protesters eventually retreated. 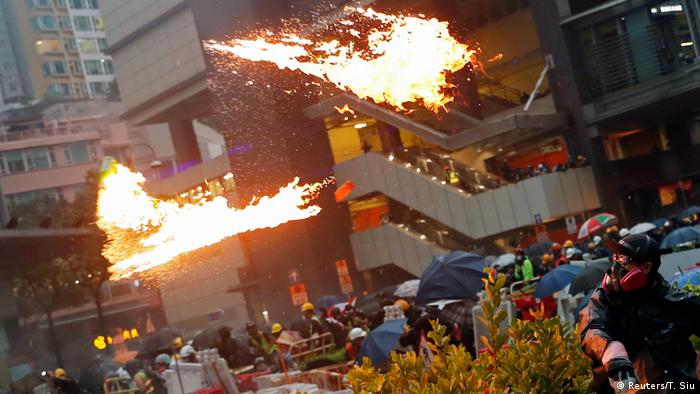 At one point, an officer fired a gun into the air after he was attacked by eight to 10 protesters carrying sticks and rods, police said. They confirmed on Monday that six officers had drawn their weapons and one had fired a warning shot into the sky.

There were no immediate reports of injuries.

In the aftermath of the skirmish, the Hong Kong government published a statement, saying: "The escalating illegal and violent acts of radical protesters are not only outrageous, they also push Hong Kong to the verge of a very dangerous situation." 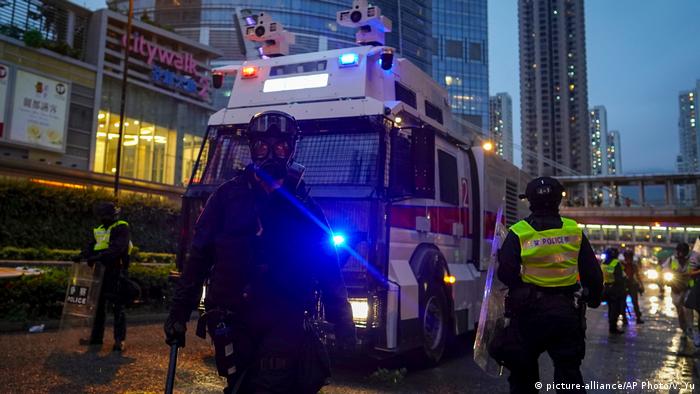 Similar violence rocked the Kowloon Bay neighborhood on Saturday.A large group of protesters threw rocks and bottles at police, who responded with tear gas and by baton-charging the demonstrators.

Twenty-nine people were arrested for various offenses, including unlawful assembly, possession of offensive weapons and assaulting police officers. At least 10 people were treated in hospital for injuries.

Hong Kong's protest movement started in opposition to plans to allow criminal suspects to be extradited to mainland China, but has grown into a larger campaign for public elections and greater autonomy from Beijing.

The former British colony returned to Chinese rule in 1997, following guarantees that it would have semi-autonomous status.

Many believe the city has seen a decline in civil and political rights due to Beijing's interference.

Throughout the rallies, China's leaders have used a mix of intimidation, propaganda and economic muscle to constrict the protests in a strategy dubbed "white terror" by the movement.

The operator of Hong Kong's MTR — the city's metro — shut stations near the main demonstration area this weekend after Chinese state media attacks accusing the transport system of being an "exclusive" service to ferry protesters to rallies.