The protracted trade dispute between the US and China is affecting other countries as well, Merkel has told the Chinese premier. The German chancellor also stressed that a peaceful solution is needed for Hong Kong. 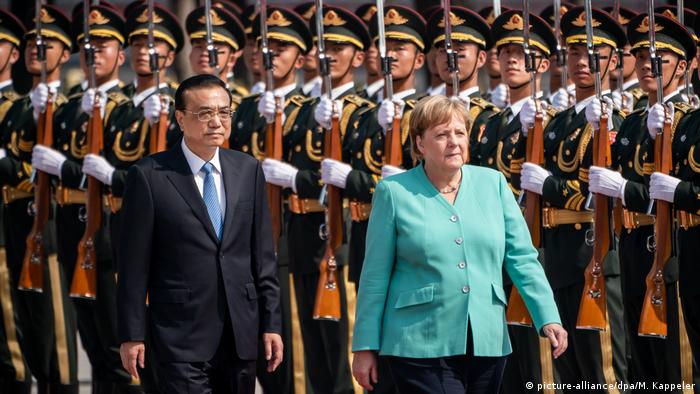 At the start of her meeting with Chinese Premier Li Keqiang on Friday, German Chancellor Angela Merkel said that the ongoing trade spat between China and the US, and the ensuing tit for tat tariffs, has had an adverse effect on other countries as well.

The German economy is on the brink of recession after contracting in the second quarter of the year due to weakened exports. At the same time, the Chinese economy is growing at the slowest pace in almost three decades, as it reels from US tariffs on hundreds of billions of dollars' worth of goods.

Merkel, who is leading a large business delegation to Beijing, also said she hoped an EU-China investment agreement would be finalized soon. This is Merkel's 12th visit to China as chancellor.

Besides trade, human rights and the current protests in Hong Kong  also feature prominently on her agenda.

Merkel said she discussed Hong Kong with Premier Li and that there needed to be a peaceful solution for the city. "I indicated during the talks that the rights and freedoms agreed upon in Hong Kong's Basic Law should be safeguarded," she said.

Li said Beijing wanted to prevent unrest in the former British colony, which has been convulsed by protests in the past few weeks.

Over the past year, Germany and the European Union have both tightened their rules for screening foreign investment, leading to accusations of protectionism by Beijing.

An EU-China investment deal would remove some of the hurdles and is sought by both Europe and China.

Merkel said Germany is open for Chinese investment and welcomed all Chinese firms to invest in the country. But the chancellor said Berlin scrutinizes investments in certain strategic sectors and critical infrastructure.

Trade between Germany and China stood at around €199 billion ($218 billion) in 2018. China has been Germany's biggest trading partner for the past three years.

Merkel and Li signed a total of 11 agreements to expand cooperation in areas such as aviation, automotive, clean energy, finance and education.

Earlier on Friday, Merkel was received with military honors by Li at the Great Hall of the People. The two leaders sat during the ceremony after Merkel earlier this year experienced repeated bouts of shaking in similar instances. Li stood during the Chinese anthem.

Later in the day, Merkel is set to take part in talks at the China-Germany Economic Advisory Committee, a platform for business leaders and politicians.

Read more: 'Germany could get caught up in trade turmoil'

She is meeting Chinese President Xi Jinping for dinner before continuing on to Wuhan on Saturday to meet with business representatives and students from Huazhong University.

A Berlin newspaper polled readers to ask for possible names for the zoo's new panda cubs. The top result? Hong and Kong. Now Germany's most popular tabloid is calling for the cubs' names to send a signal to China. (06.09.2019)