Germany's economy minister, Peter Altmaier, wants German companies to receive state support to compete against innovative firms in the US and China. Critics say the plan is incompatible with a free market economy. 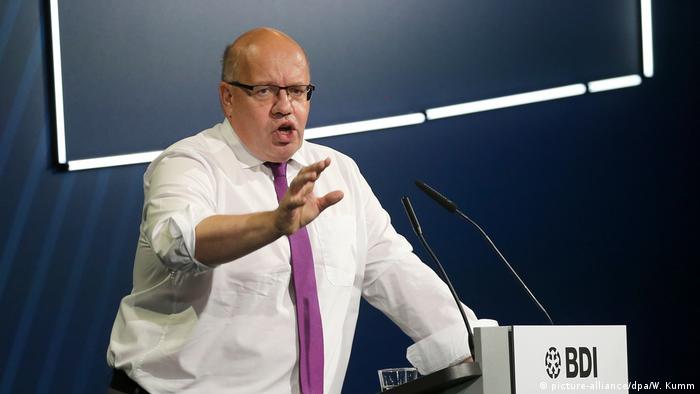 The "Industrial Strategy 2030" is necessary because German companies are under increasing pressure from innovative firms that receive government support in the United States and China, Altmaier said on the sidelines of a trip to Egypt.

In a guest column for Die Welt am Sonntag newspaper, Altmaier dismissed critics who said his ministry's "Industrial Strategy 2030" advocated protectionism and massive government interference in the economy.

"The state can only nudge or give [the economy] a boost," he said. "Investments must come from the private economy."

Details about the industrial strategy surfaced earlier this week in Die Welt newspaper.

A draft reportedly calls for increasing manufacturing's share of the economy from 23.4 percent to 25 percent and increased government support for nine key industrial sectors like chemicals, engineering, medical devices and aerospace.

He also mentioned the need to stay innovative against the backdrop of technological advances like artificial intelligence and 3D printing.

Proposals to help Germany's key sectors include cheaper energy, a competitive tax system, and an easing of monopoly laws to make it easier for German companies to merge and become "national champions."

The strategy, which Altmaier plans to present on Tuesday, reportedly names specific German companies such as Deutsche Bank, Siemens and BASF as targets for state support.

Some economists quickly denounced the strategy, saying the plan would be ineffective and harm domestic consumers.

Lars Feld, who advises the government as a member of the German Council of Economic Experts, told Die Welt that the strategy's focus on "subsidization and regulation" was inconsistent with a market economy.

The government also presumed to know which companies and technologies to promote and what the optimal share of manufacturing in the future would be, he said.

University of Mannheim professor Hans Peter Grüner told the newspaper that a strategy "based on the Chinese model" of state support was "not an option" because it would reduce domestic competition and lead to higher prices for consumers.

Another member of the German Council of Economic Experts, Peter Bofinger, nevertheless welcomed that the government was "thinking about an overall concept for industry and innovation."

"The important thing is to find a strategic answer to the industrial policy that China is pursuing," he said.

As elections draw nearer in Germany, industry leaders are concerned about economic developments with the Green Party likely to have a bigger say. The Federation of German Industry hopes competitiveness will not suffer.