Activist Joshua Wong urged the German Chancellor to use her trip to China to speak on behalf of pro-democracy protesters. Meanwhile, reports suggest Lam is expected to withdraw the controversial extradition bill. 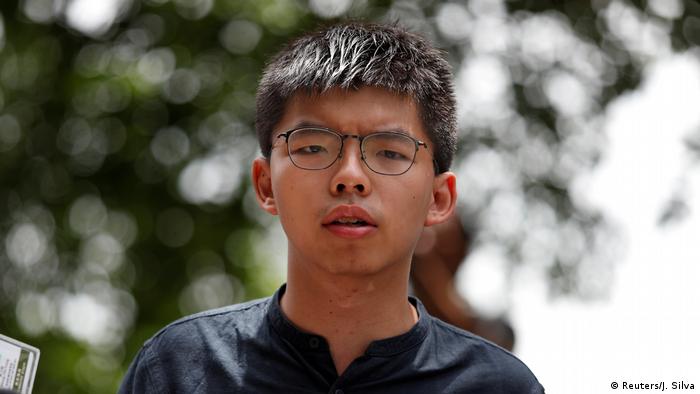 In an open letter published in Germany's Bild daily, prominent Umbrella Movement leader Joshua Wong asked Chancellor Angela Merkel to back the pro-democracy protesters during her upcoming visit to China. It comes amid reports that the extradition bill is expected to be withdrawn on Wednesday.

Sources told the South China Morning Post that the extradition bill is set to be formally withdrawn on Wednesday afternoon. It would mean the government will concede to one of the major demands from protesters.

The letter comes as Hong Kong has been mired in political instability for months and in the wake of violent protests. Activists and demonstrators poured into the streets initially over a piece of legislation that would make it easier to extradite crime suspects to China.

But the movement has evolved to demand the resignation of Hong Kong's Chief Executive Carrie Lam, the expansion of democratic reforms and an investigation over police brutality against demonstrators.

"You have first-hand experience of the terrors of a dictatorial government," Wong wrote, in reference to Merkel's upbringing in the Soviet-backed regime of the German Democratic Republic (GDR).

Merkel spent four decades living in communist East Germany, working as a research scientist until the end of the Cold War led to reunification in 1990.

She has described the GDR's collapse as the most important turning-point in her life.

"The Germans courageously stood at the forefront of the fight against authoritarianism during the 80s," the 22-year-old Wong said.

"We hope that you will express your concern about our catastrophic situation and that you will convey our demands to the Chinese government during your stay in China."

Merkel will land in China on Thursday for a three-day trip, accompanied by a large business delegation.

Though the Hong Kong protesters' cause is popular in Germany, Merkel will face the same difficulties she has faced before when calling China out for human rights violations, while still seeking to maintain economic ties with Beijing.

"Germany should be on its guard doing business with China, because China does not abide by international law and has repeatedly broken its promises," Wong wrote in the letter, signed also by Joephy Wong and Alice Yu, artists from Hong Kong now living in Germany.

The protests in Hong Kong over the past few months have evolved into the biggest political crisis in the Asian financial hub since its 1997 handover from the British to China.

Thousands of students have rallied in Hong Kong on the first day of classes after the summer break. This follows a weekend during which police used some of their harshest force yet in over three months of demonstrations. (02.09.2019)

Hong Kong's leader, Carrie Lam, has denied she considered resigning over months of protests. She has addressed reporters after an audio recording emerged of her saying she wanted to quit. (03.09.2019)

Hundreds of pro-democracy activists have blocked some routes to the city's airport after a night of violent protests marked by fires, tear gas and police beatings. Police said the protests violated a court injunction. (01.09.2019)

The arrest of several prominent pro-democracy activists raised concern among EU foreign ministers. With Chinese soldiers stationed at the border with Hong Kong, Europe has warned against any further escalation. (30.08.2019)