Hong Kong's leader, Carrie Lam, has denied she considered resigning over months of protests. She has addressed reporters after an audio recording emerged of her saying she wanted to quit.

Carrie Lam: "I have not even contemplated to discuss a resignation"

Hong Kong's embattled leader on Tuesday insisted she had no intention of stepping down after three months of pro-democracy protests in the former British territory.

Carrie Lam told reporters that she would continue in office, despite the leaking of an audio recording of her saying she ought to quit.

"I told myself repeatedly in the last three months that I and my team should stay on to help Hong Kong," Lam told a news conference on Tuesday morning.

In the recording, Lam is heard saying: "For a chief executive to have caused this huge havoc to Hong Kong is unforgivable."

"If I have a choice," she added in the recording, "the first thing is to quit, having made a deep apology."

Lam in February introduced controversial legislation that would have allowed people in Hong Kong to be sent to China to face trial. She suspended the bill in June following clashes between protesters and police during several massive anti-bill demonstrations.

The protests have continued since and activists want the bill to be entirely withdrawn, or for Lam to resign.

The Hong Kong leader described the leaking of the audio recording as "quite unacceptable." She denied accusations that she or her government had orchestrated it.

Lam added that she was disappointed that comments made in a private meeting, where she had been sharing the "journey of my heart," had been leaked.

Lam also spoke of Beijing's belief that her government could solve the crisis without the help of mainland China.

Meanwhile pro-democracy campaigner Joshua Wong urged Taiwanese people to hold their own demonstrations as they face pressure for reunification with Beijing. 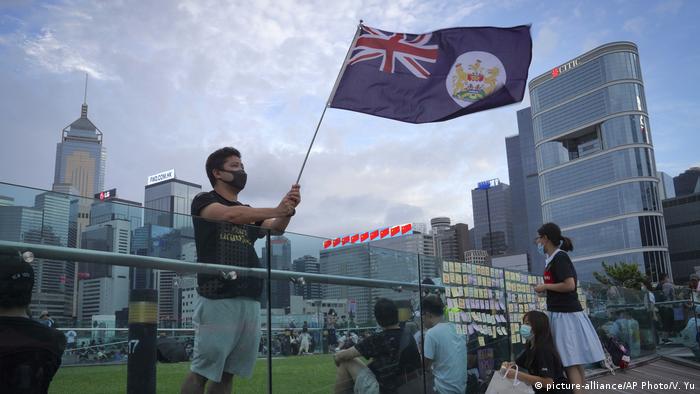 Wong arrived in Taiwan on Tuesday for a series of events organized by local political groups.

"We hope that before Communist China's National Day on October 1, our friends in Taiwan can express their support for Hong Kong through street protests," Wong said at a news conference in Taipei.

The 22-year-old was granted bail on Friday after police arrested several activists.

Wong's political party, Demosisto, had earlier said he had been "forcefully pushed into a private minivan on the street in broad daylight."

Joshua Wong: 'We will continue our fight'

Carrie Lam: "I have not even contemplated to discuss a resignation"

Pro-Trump groups march to protest against election loss 50m ago

Coronavirus digest: US to start vaccine distribution 1h ago

Nigeria: Hundreds of students feared abducted by gunmen 5h ago