China sneezes, but will Germany catch a cold? | Business | Economy and finance news from a German perspective | DW | 22.01.2019

China sneezes, but will Germany catch a cold?

"The German economy rises and falls with China." Bankers are generally not known for their hyperbole, but the words of Jörg Krämer of Commerzbank, speak to a truth that appears increasingly evident. 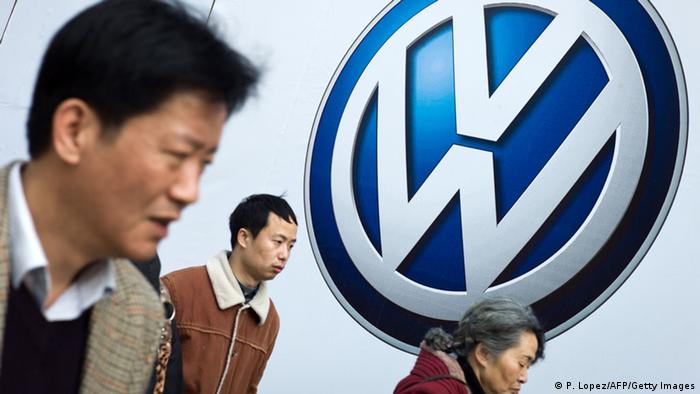 Germany, as a maker of quality cars and capital goods, is one of only a handful of Western economies to have broken into China as a major export market.

But a "toxic cocktail” of risks, including high debt at China's state-owned companies and uncertainty surrounding the trade war with the United States, were aggravating signs of economic cooling in China, Jörg Krämer, Chief Economist of Germany's second-largest lender, Commerzbank, has warned.

China has been key to Germany's expansion by buying German cars and industrial goods that have helped it create the infrastructure enabling the growth that has made it the world's second-largest economy.

China's economy grew 6.6 percent in 2018, its slowest rate since 1990 and growth for 2019 is expected to fall to 6.5 percent or lower, according to the World Bank and economic experts.

China is struggling with tariffs imposed by the US and has very high levels of debt at over 300 percent of GDP, according to the International Institute of Finance.

The government has loosened monetary policy and reduced tax for small and medium enterprises, but has held back on cutting taxes in other areas.

Outside of the EU, China remains the most important trading partner for Germany. But Chinese imports from Germany fell by 37 percent in 2018. Trade volume reached €187 billion ($205 billion) in 2017.

Germany's DIHK Chambers of Industry and Commerce estimates that about 900,000 jobs in Germany depend on exports to China, which slowed to 4 percent in November, from double-digit levels earlier in the year.

"Germany should clearly be concerned about the Chinese slowdown, even though it is hard to tell how strong the slowdown really is," Carsten Brzeski, Chief Economist for Germany and Austria at ING-DiBa, told DW.

"Needless to say that a slowdown in China, particularly when it is driven by domestic demand, will leave marks on the German economy," Brzeski said,

"The conflict has created so much global uncertainty that the former strength of the German export sector, i.e., high geographic diversification, could no longer offset problems in one or two trading partners," he added.

Germany's economy is slowing, according to data from the Federal Statistics Office (Destatis). GDP grew by 2.2 percent in 2017 but fell to 1.5 percent in 2018, a 37.8 percent decrease.

Some believe softening German data could be a sign of a turning point in the global economic cycle after years of growth. This is compounded by China moving up the value chain and innovating faster than many German firms.

David Collins, professor of International Economic Law at the City University of London believes China's efforts to stimulate the economy through domestic reforms, including a possible return to support for state-owned companies and infrastructure, will hit German exporters of manufactured goods.

"The aim of these measures is to stimulate consumption internally (meaning from domestic sources). It will not offer much help to German exporters," he told DW.  Moreover, the US-China trade spat could "increase imports [from China] as a consequence of diversion away from the high-tariff US," which will be "beneficial to German consumers" but add pressure on German companies at home.

"The business outlook for German companies in China is getting clouded," said DIHK's Volker Treier.

As German exports wane, Berlin is moving towards domestic-driven growth, a key strategic change after the post-war ‘economic miracle' was largely export-driven.

Some in German industry want a more robust approach to China. The influential BDI industry association last week called for tougher EU policies towards China and called on companies to rely less on the Chinese market.

The Economy Ministry welcomed a recent BDI report to that effect, but it also said that differences with China must be solved through dialogue.

He wants Germany to become a center for Chinese and renminbi-denominated financial products in Europe. Berlin also hopes to cash in on Britain's decision to leave the EU as banks move operations from London to Frankfurt.

But the challenge is also illustrated by Volkswagen's plan to invest in electric vehicles, part of a $300 billion plan by global automakers with nearly half of the money targeted at China. Herbert Diess, chief executive of VW, said: "The future of Volkswagen will be decided in the Chinese market."

The US-China trade conflict affects the German automotive industry, as well as other industries, in two ways: via the slowdown in Chinese demand and possible tariffs on exports produced in the US.

Germany's auto industry has been hit by falling demand in China and posted its first decline in new car sales in nearly three decades in 2017.

While luxury-car makers such as BMW AG and Daimler AG's Mercedes-Benz bucked the trend and have sold more cars in China, mass-brand makers such as Volkswagen saw a big drop in sales.

"For the German car industry, China is the most important foreign market due to its size and the still generous margins," Stefan Kipar from BayernLB Research in Munich, told DW.

Continental AG, a German auto-parts maker that supplies Volkswagen and other auto companies, said orders from car manufacturers had fallen off over the past few months in part because of weaker sales in China.

"Despite the slowdown, there will not be a dramatic crash in the automobile sector," Max Zenglein from the Mercator Institute for China Studies (MERICS) in Berlin told DW. "This time around China will no longer be the savior for many German companies.

The German government plans to tighten rules on foreign investment in some companies by lowering the threshold at which it can consider blocking such plans. The move comes amid increasing concern about Chinese investors. (08.08.2018)