China′s economy not opening up despite Beijing′s assurances | Business| Economy and finance news from a German perspective | DW | 22.11.2018

China's economy not opening up despite Beijing's assurances

Threatened by a trade spat with the US, Beijing has once again promised to open up its economy. The reality, however, is that foreign firms are finding it harder than ever to compete against China's state-owned giants. 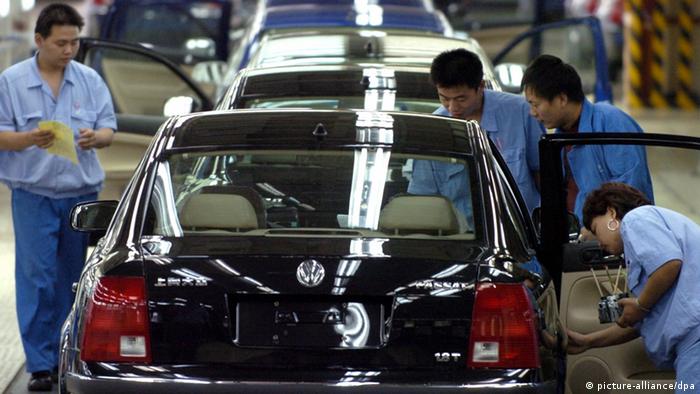 Chinese Premier Li Keqiang declared again this week that Beijing would allow more foreign participation in its $13.5 trillion (€11.86 trillion) state-led economy. He recited an often-made assurance that the country is opening up to international investment. But while the US loses patience over what it calls an uneven playing field for multinationals operating in China, those remarks increasingly ring hollow.

Washington has released an updated report detailing how Beijing deploys a number of illegal techniques to force American firms to transfer technology to its state-owned firms. Pressure from government officials, cyberattacks and espionage were cited by the Office of the US Trade Representative (USTR), whose earlier report encouraged President Donald Trump to impose two rounds of tariffs on Chinese imports to the US over the summer.

The report singled out the decision to waive the need for foreign automakers to form joint ventures with local firms to produce cars in China, which perhaps showed some willingness for foreign firms to flourish in the world's fourth-biggest consumer market.

But USTR said Beijing had imposed investment rules around the construction of new car factories that would still be "more onerous on non-Chinese entities." One caveat to foreign automakers operating independently was meeting complicated new fuel-efficiency requirements, the trade office said.

Max Zenglein, head of Program Economic Research at the Berlin-based Mercator Institute for China Studies (MERICS), told DW that Beijing had overstated the degree that its economy was opening up to the rest of the world. While China's leaders see it as "a process that will take a century," Western countries have convinced themselves it will "happen much faster."

"This is also one explanation why the trade war is escalating so fast — it's because they [the US] are fed up with decades of negotiations and tacit promises that are just too slow," he said.

Zenglein said Beijing only relaxed the joint venture rules for car manufacturers because it realized the days of the combustion engine were numbered.

"China has fairly accommodating policies towards companies where they are in need of their technology," he said, but added that several firms had confided how their Chinese revenues collapsed "as soon as sufficiently sophisticated-enough domestic players emerged to supply the market."

Those joint ventures with foreign auto manufacturers have helped it to take a lead in the development of electric vehicles (EVs). Backed by billions in state investment, the Asian giant has "leapfrogged and is reshaping the rest of the automotive industry," along with autonomous vehicles, Zenglein said. In doing so, it can now force foreign companies to use more Chinese components.

With a market share of more than 50 percent for battery cells used in electric vehicles, China is now looking to push out Korean or Japanese competitors, while leaving European hopefuls for dust.

"In essence, this means that the value chain is shifting globally and China is pulling it into its own economy," Zenglein told DW.

Beijing's ambitious "Made in China 2025" industrial policy is also causing widespread suspicion in the US and Europe. China's leaders, again, aim to break the country's reliance on foreign technology with a 10-year plan to make China a major manufacturing power by bringing its hi-tech industries up to Western levels.

One US think tank, the Council on Foreign Relations, has warned that China's ambitions are a "real existential threat to US technological leadership.”

USTR's report noted that since the US-China trade conflict had erupted earlier this year, the imposition of tit-for-tat tariffs had forced Beijing's leaders to downplay the significance of the Made in China 2025 policy. It is still, however, being rolled out "on a large scale," said USTR, and China's state-led enterprises will, once again, gain huge advantages over their foreign competitors.

"With massive state funding, Chinese companies can operate with fewer risks,” Zenglein told DW. "So a state-owned enterprise can build up some gigantic EV battery factory, for example, without the risk of bankruptcy. They can then move much faster than a company that needs to generate a profit."

The West is mistaken if it believes the private sector will play a much larger role in the Chinese economy going forward, Zenglein said.

"It's an economy that is becoming increasingly rather than less state-driven."

US multinationals have stepped up their lobbying of the Trump administration ahead of a meeting between Chinese President Xi Jinping and his US counterpart on the sidelines of the G20 summit in Buenos Aires early next month.

Despite Trump imposing two rounds of tariffs on Chinese imports worth $250 billion, business groups are worried he may now seek a new trade deal with China. While pressure mounts that the tariffs may be hurting the US economy, some business leaders are urging the third round of tariffs that would force China to make deep, structural changes.

"The economic relationship that China has with its major trading partners is no longer working and needs desperate changes, otherwise the negative implications for Europe and the US will be massive."

What Chinese President Xi Jinping had to say about market reforms

In his keynote address at the opening of the Communist Party congress, Chinese President Xi Jinping has said economic and financial reforms will be accelerated. What exactly is the leadership aiming to do? (18.10.2017)

APEC summit sees China and US at odds over trade war

The Asia-Pacific summit has become the latest stage for the trade dispute between the US and China. Beijing called for consultations as Washington threatened more tariffs. (17.11.2018)