Germany's industrial giants have been reluctant to invest in the costly production of electric car battery cells until now. Will a €1 billion government grant be enough to recover time lost to China and South Korea? 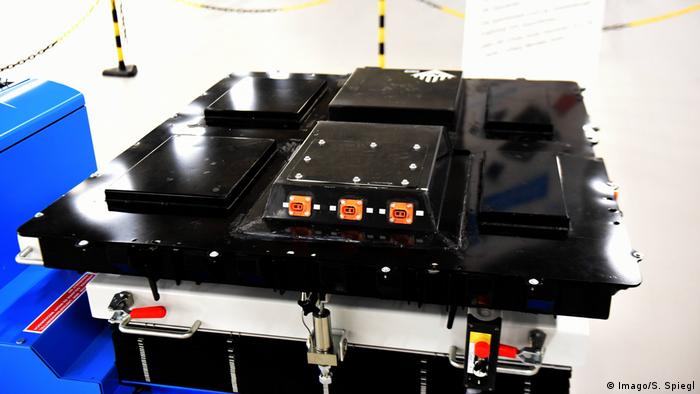 To say that Asian countries dominate the production of electric car battery cells is an understatement. According to a 2014 European Commission report, Asian companies have achieved an insurmountable 88 percent share of global Lithium-ion manufacturing capacity — with more than 50 percent belonging to China alone.

Over the past four years, South Korea, Japan and China have ramped up their battery-cell production capacities to cope with the exponential demand for electric vehicles (EVs), while most manufacturers in Europe hesitated due to tight margins and the huge investment required.

That is until Tuesday when Germany's economic affairs minister Peter Altmaier announced the government would set aside €1 billion ($1.2 billion) to support the production of next-generation solid-state batteries in Europe.

Speaking at a two-day electromobility conference in Berlin, Altmaier said it was important the German state offer its full support to the venture "as was the case with the development of Airbus and Ariane [space program]."

Some analysts think Germany may be too late to the party and that its sudden rush to back electric car battery cell production may even produce a supply glut that would hurt the overall market.

Jens Weinmann, Program Director of the Berlin-based European School of Management and Technology, cautioned ministers against equating the construction of a complex airplane like Airbus with trying to get into the commodity market, where competition is fierce.

"We have had some experience with trying to establish production in Germany," Weinmann told DW, referring to an attempt to break into the solar cell market. But that strategy "failed miserably."  He described how Asian competitors acquired heavily subsidized German startups, leaving red faces within Germany's much-prized industrial sector.

Another attempt to capture a slice of the EV battery market — which is set to be worth some $84 billion by 2025 — saw Daimler's subsidiary Li-Tec produce lithium-ion battery cells from a factory in Kamenz, Saxony, but it was forced to close in 2015 due to high operating costs.

Other German conglomerates have flirted with battery cell production and then decided against it, including Bosch — one of the world's biggest automotive suppliers.

Despite much skepticism, Stefan Bratzel, head of Germany's Center of Automotive Management, sees domestic control over battery cell production as being vital to protect the uniqueness of the big German car brands.

"With electromobility, the battery cell is one of the most decisive elements, so it's important to have that competency in Germany, or at least Europe," he told DW.

Despite its tardiness, Bratzel sees Germany being able to catch up to its Asian rivals in the medium term due to the nascency of the EV market, which accounted for just 1.3 percent of total global new vehicle sales in 2017.

"It's really a race that Germany has to begin now, and maybe in nine or 10 years it will be able to compete," he added.

Bratzel noted the consortium's focus will be on solid-state technology as this kind of battery has a higher energy density, a longer driving range and is safer than the lithium-ion battery, which can be found in most EVs to date.

The auto industry is critical to Germany's future economic dominance. Amid concerns that the decline of the combustion engine will see the eradication of some 500,000 German jobs, Chancellor Angela Merkel's government is keen to support the likes of Volkswagen and Daimler to help them maintain their technological edge.

Reports suggest at least one of the proposed manufacturing sites would be based in Germany, with a second potentially in Poland.

The Berlin government's strategy is part of the European Union's Battery Alliance initiative, which aims to boost the EU's share of the electric car battery cell manufacturing capacity, from a derisory 4 percent at present. Altmaier said on Tuesday the aim was for Germany and Europe to achieve a 30 percent market share by 2030.

The German auto industry has, until now, preferred to bulk purchase battery cells from Asia, while focusing on broader issues relating to the transition to EVs, including autonomous driving. But it too sees the strategic importance of domestic battery production.

"Germany's car industry has realized it is too dependent on foreign batteries, and in future Asian manufacturers could even prioritize their own car producers especially if they struggle to keep up with demand and as all countries face pressure to meet CO2 [carbon dioxide] emissions targets," said Bratzel.

He thinks the domestic car industry faces a grave threat not only from the plethora of tech giants and other auto manufacturers who are keen to grab a slice of the EV market, but from cell producers themselves.

"There is no reason why established cell producers cannot also expand their role in the value chain and start producing cars instead of only the battery cells," Winter said.

He pointed to several Asian cell producers, who he said are now producing not only battery cells, but whole battery packs and manufacturing the chemical materials used in cells.

EU funds could be exploited

The German business daily Handelsblatt said Germany's new battery cell production consortium would have no direct state participation, apart from the €1 billion in government aid. EU research and development funds could also be utilized, while structural EU funds could be applied for if production involved eastern European countries like Poland.

Other European countries have more advanced plans to produce battery cells domestically. Sweden's Northvolt aims to produce 32 gigawatt-hours (GWh) of battery cells a year by 2023, while France's Saft, owned by energy company Total, is planning a new generation of batteries that can be used in EVs.

American electric-car producer Tesla, meanwhile, has built its own Gigafactory for EV battery production in Nevada and is also planning similar facilities in China and Europe. CEO Elon Musk says Tesla eventually plans to have some 20 Gigafactories around the world, and favors Germany as a location.

Further complicating the German government's plans are the ambitions of the market-leading Asian battery cell manufacturers, several of whom are now planning European production facilities in joint ventures with local firms.

British technology firm Dyson has joined the race to develop a battery-powered electric car. The company is investing billions of pounds to build an electric vehicle that it says will be launched in 2020. (26.09.2017)