Hong Kong has passed a new regulation threatening punishment for any protesters caught wearing masks. Expert Willy Lam told DW that the move could have grave consequences for the future of civil liberties in Hong Kong. 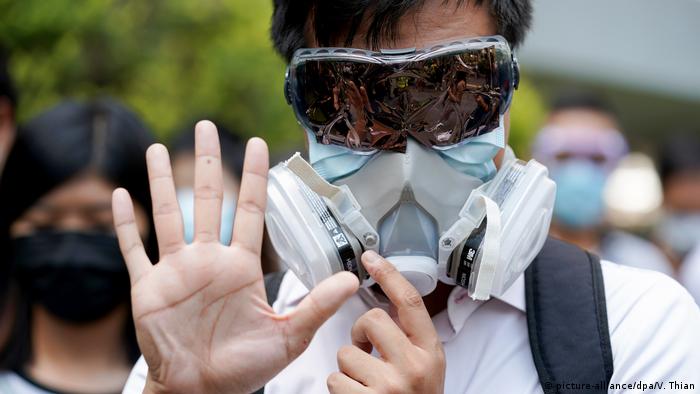 DW: Hong Kong's government introduced the anti-mask law by invoking the Emergency Regulations Ordinance. Do you think this represents the government's last resort to try and end the ongoing street protests?

Willy Lam: The adoption of the Emergency Regulations Ordinance will have a negative impact on Hong Kong's status as an international financial center. The ordinance was established in 1922, and it was only applied once in 1967. The application of the Emergency Regulations Ordinance not only shows that Hong Kong is now in an abnormal state, but it will also have a huge impact on Hong Kong's rule of law.

I think the anti-mask law will have limited effect on ending street protests, because when thousands of protesters wearing masks show up at a rally, there are not enough police to detain all of them. At the same time, I think the law will trigger a new round of protest, further escalating the ongoing protests. Overall, I think this is a very unwise move.

How will the invocation of the Emergency Regulations Ordinance impact Hong Kong's rule of law?

The Emergency Regulations Ordinance allows the government to introduce laws and restrict many aspects of citizens' rights. The government can implement curfews and shut down media outlets. It means that Hong Kong has entered state of emergency, and it is not too different from declaring martial law.

Do you think this is the result of direct intervention from Beijing?

After millions of people in Hong Kong took to the streets on June 9 and June 16, Beijing lost confidence in Carrie Lam and the Hong Kong government. So many major decisions regarding Hong Kong are in fact made by Beijing.

It is fair to say that the Chinese government has decided to adopt hardline measures against Hong Kong, including the possible dispatch of riot police from neighboring Guangdong province to Hong Kong.

Chinese President Xi Jinping has said he won't use the People's Liberation Army (PLA) stationed in Hong Kong to handle the ongoing protests, but his current strategy is to arrest protesters through strict laws and methods of punishment. Following the city-wide protests on October 1, Hong Kong police arrested 269 people. Their goal with introducing the anti-mask law is to arrest more people.

Carrie Lam organized a community dialogue last week, but now she has suddenly decided to adopt a hardline measure. Do you think this decision was triggered by the widespread clashes between police and protesters on October 1st? Or was this a decision made by Beijing?

Even though I'm not entirely sure whether the decision to introduce the anti-mask law was triggered by the conflict on October 1 or not, it is clear that Beijing has the final say over this move.

Before the Hong Kong government introduced this law, several pro-China groups and Hong Kong police all made similar suggestions. Carrie Lam originally said she would seriously consider whether it is suitable for Hong Kong to adopt the ordinance or not, but I think after discussion with central government officials, they decided to invoke the Emergency Regulations Ordinance.

How do you think the situation in Hong Kong will develop?

There is no sign that street protests will slow down anytime soon, and following the introduction of anti-mask law, I think there will actually be more street protests over the next few weeks.

Hong Kong's government is likely to crackdown on protesters through stricter laws and serious punishment. They will give law enforcement more power to maintain social stability, including letting police have more power to arrest protesters.

Several media outlets have reported that the Chinese government has dispatched riot police from Guangdong province to join Hong Kong police in their operation against protesters. Since Hong Kong's police force has a manpower of around 30,000, I think it is a reasonable assumption that the Hong Kong government has sought police support from nearby provinces on the mainland.

However, I don't think it is possible for the Chinese government to send in PLA troops at this point, because that is considered to be the government's last resort for suppressing demonstrations.

There have been news reports about Beijing increasing the number of military personnel stationed in Hong Kong. If this is true, it should be considered as preparation for a worst case scenario, because when things escalate out of their control, they want to have enough manpower to deal with unexpected situations.

If China deploys the PLA to maintain control over Hong Kong, it will send shock waves across the world, because it will severely weaken the foundation of the One Country, Two Systems' framework.

Willy Lam is an adjunct professor at the Chinese University of Hong Kong's Center for China Studies.

More than a million Hong Kongers have taken to the streets to protest against a Beijing-backed extradition bill. But are the rallies more about public anger toward China's role in the city's affairs? (13.06.2019)