Former Soviet leader Mikhail Gorbachev has warned that the crisis in Ukraine could lead to a major war, or even a nuclear war. In an interview with a German magazine, he criticized both Russia and the West. 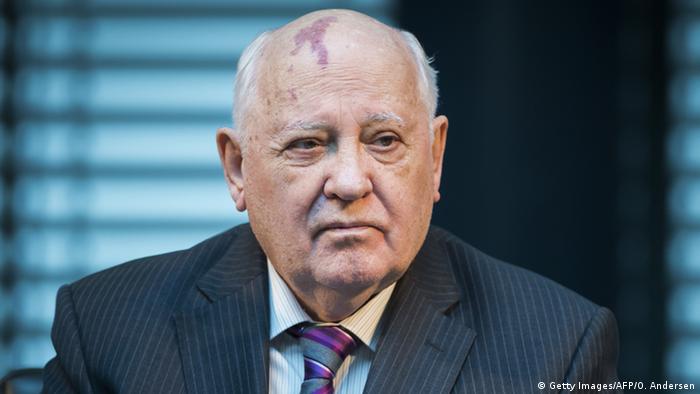 In an interview with the German weekly newsmagazine Der Spiegel, 83-year-old former Soviet leader Mikhail Gorbachev said the crisis in Ukraine could lead to large-scale war in Europe or even a nuclear war. "We won't survive if someone loses their nerves in the current tension."

The Nobel Peace Prize laureate decried the "loss of trust" between Russia and the West as "catastrophic," and said ties must be "defrosted."

Gorbachev accused the West and NATO of destroying the structure of European security by expanding its alliance. "No head of the Kremlin can ignore such a thing," he said, adding that the US was unfortunately starting to establish a "mega empire."

The man seen as a key player in the reunification of former East and West Germany in 1990 also accused Germany of interfering in Ukraine's crisis, saying, "The new Germany wants its hands in every pie. There seems to be a lot of people who want to be involved in a new division of Europe.

"Germany has already tried to expand its influence of power towards the East - in World War II. Does it really need another lesson?"

"It is simply not acceptable when someone such as the anti-corruption blogger and politician Alexei Navalny is under house arrest for speaking out."

Gorbachev has warned of a nuclear war on a number of occasions in recent months. In an article for the Russian daily Rossiyskaya Gazeta, published on December 11, he said: "The situation in Europe and the world is extremely alarming … the result of the events that took place in the last months is a catastrophic loss of trust in international relation," which could lead to war.

"We must think of the future," the former leader said.

On Monday, the foreign ministers of Germany, France, Russia and Ukraine are set to meet in Berlin to launch another attempt to break the deadlock in the Ukraine conflict.

The ministers are expected to discuss the possibility of a summit of the four countries' leaders in Kazakhstan, which Ukraine had suggested take place on January 15.

Regarding the fragile four-month-old ceasefire between Ukrainian forces and pro-Russian separatists, which has been broken on a number of occasions, German Foreign Minister Frank-Walter Steinmeier said everything should be done to reach a compromise, adding, "It would be wrong not to try it."

In the face of ongoing ceasefire talks in Berlin and a summit next week in Kazakhstan, Ukraine is arming its military for war. European leaders are becoming less optimistic about the Kazakhstan plan. (06.01.2015)

The decision to close 15 military bases across Europe - amid ongoing Western tensions with Russia over Ukraine - will not have a major effect on America’s military posture in Europe. But it sends several strong signals. (09.01.2015)

Outspoken Kremlin critic Alexei Navalny has been found guilty of fraud in Russia. The date of his sentence had been moved up by two weeks, prompting demonstrations in his support. (30.12.2014)

Russian police have detained Alexei Navalny and dozens of others after he broke house arrest to join an opposition rally. The Kremlin critic was sentenced earlier in the day for embezzlement. (30.12.2014)