Outspoken Kremlin critic Alexei Navalny has been found guilty of fraud in Russia. The date of his sentence had been moved up by two weeks, prompting demonstrations in his support. 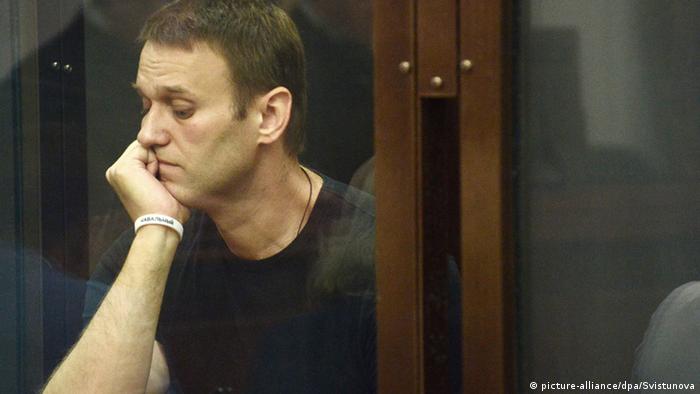 A Moscow court sentenced Alexi Navalny to a 3.5 year suspended jail term on Tuesday for embezzling hundreds of thousands of dollars from two firms, including an affiliate of French comestics company Yves Rocher. His brother Oleg was given three and a half years in prison.

"Aren't you ashamed of what you are doing?" Navalny told the court and judge Yelena Korobchenko. He asked Korobchenko if she was sending Oleg to jail to "punish" him and called the decision to send his brother to prison a "disgrace."

Outside the court house, Navalny kissed Oleg goodbye. News agency AFP reported that he had a parting shot for Putin's government, saying "this regime has no right to exist, it must be destroyed," and calling on his supporters to demonstrate against the court's verdict.

The hearing was deliberately sped up to avoid massive protests, though Navalny's advocates still planned to protest later on Tuesday.

Prosecutors in Moscow had asked the court earlier to move up the date on dissenter Alexei Navalny's case and to sentence him to 10 years in prison, an unusually high sentence for a financial crime. Navalny's sentence hearing was originally scheduled for January 15, prompting thousands of his supporters to stage a protest. The former lawyer and rights activist has been under house arrest since February this year.

Following the court's decision to reschedule the hearing, Navalny's supporters decided to protest on Tuesday. "We have no choice, we need to come out tomorrow and show how numerous we are," protest organizers said on Facebook the previous day.

The lawyer and popular blogger rose to prominence due to his investigations of official corruption and his leading role in organizing massive anti-Putin demonstrations in Moscow in 2011 and 2012. In 2013, in a different criminal case, Navalny was found guilty of embezzlement and sentenced to prison, but he was released the next day after thousands of people protested in the streets of Moscow. He was then handed a suspended sentence and finished a strong second in Moscow's mayoral election in September 2013 with 27 percent of the vote.

Navalny was also found guilty of slandering a city lawmaker in spring of 2014.

Earlier in December, prosecutors asked the court to convict Alexei Navalny of defrauding two companies and to sentence him to a decade in prison. Prosecutors are also demanding an eight-year prison sentence for his brother Oleg who is also on trial for the same charge of stealing 30m roubles ($526,000) from two firms.

Navalny, who is under house arrest, has called the charges against him ludicrous. The open critic of Vladimir Putin has previously said that the Russian president himself will personally decide his fate.