On the cusp of taking the reins from Angela Merkel, incoming Chancellor Olaf Scholz has sent a strong signal about where his government's foreign policy priorities lie. DW has rounded up the most important points. 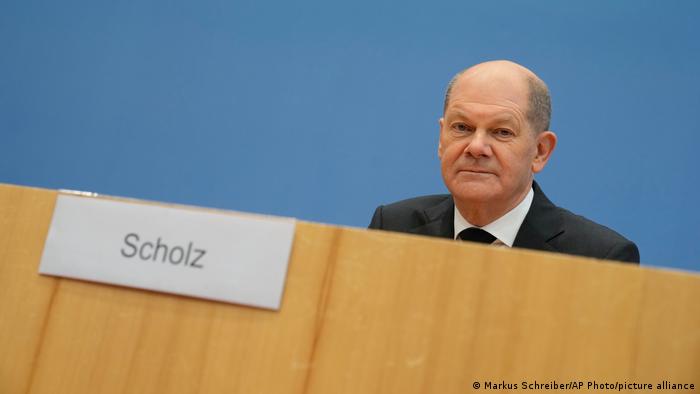 Germany's incoming government, led by the center-left Social Democrats (SPD), were pressed to clarify their foreign policy priorities at a press conference on Tuesday.

Having officially signed a three-party coalition agreement, Chancellor-designate Olaf Scholz and the rest of his Cabinet members are expected to take office on Wednesday after a vote and swearing-in ceremony in the German parliament.

Strengthening the European Union on the global stage — and making sure Germany is part of that process — was of the utmost priority, Scholz said.

For his first trip outside of Germany as chancellor, Scholz said he would honor recent tradition and travel to Paris, France — followed by a trip to Brussels for meetings with EU heads. Angela Merkel, Gerhard Schröder, Helmut Kohl and Helmut Schmidt all made a point of visiting France first after becoming chancellor. Franco-German reconciliation and friendship in the aftermath of the two world wars has become a core pillar of German foreign and European policy.

"German foreign policy is a policy of continuity," Scholz said, in a nod to his predecessor Angela Merkel's push to strengthen the 27-member bloc.

The incoming chancellor also pledged German support for Poland concerning the crisis the border with Belarus — criticizing Belarusian leader Alexander Lukashenko for using migrants to put pressure on the EU.

Also on the subject of Poland, incoming vice-chancellor Robert Habeck said rule of law was essential for all members of the EU — taking aim at Poland and Hungary. The Green Party co-chief added that Germany would back the European Commission, which is in disputes with the governments in Warsaw and Budapest.

With regards to the latest movements of Russian troops on the border to Ukraine, Scholz said that it must be made "very clear" to Russia that further threats to Ukraine would be unacceptable.

He voiced concern about the situation on the Russian-Ukrainian border, saying that the principles of de-escalation that have prevailed in the aftermath of the Cold War must be adhered to.

"These include the inviolability of borders. It is very, very important that no one digs around in the history books in an effort to redraw the borders," he said. "Therefore, it must be very, very clear that it would be an unacceptable situation if a threat to Ukraine would emerge."

After the EU, the new German government's second foreign policy priority will be strengthening transatlantic ties and cooperation with NATO.

A future call with US President Joe Biden is likely in the cards once Scholz officially takes office.

"It is now clear what binds us together," Scholz said, referencing democratic values.

Scholz was notably less direct when asked to clarify his policy towards China, instead saying that working with the EU and the US would be the most immediate priorities.

He also avoided answering questions on whether Germany would join the US in a diplomatic boycott of the 2022 Winter Olympics in Beijing.

Over the weekend, incoming foreign minister and Green Party co-chair Annalena Baerbock sparked concern from China after she suggested taking a harder course on Beijing to address human rights concerns.