Poland's PM Mateusz Morawiecki slammed Belarus' efforts to use migrants as "weapons" against the bloc ahead of talks with EU leaders. He also accused Belarus of having the "back-room support" of Russian President Putin. 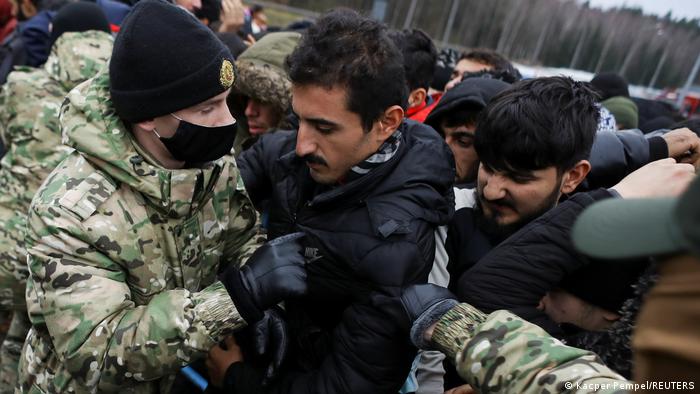 Polish Prime Minister Mateusz Morawiecki accused Belarus on Sunday of seeking to destabilize the EU by orchestrating the migrant crisis unfolding at his country's border.

Morawiecki warned about the threat to the bloc as he prepared to meet with EU leaders later in the day.

"Today, on Poland's eastern border, we are dealing with a new type of war, a war in which migrants are weapons, in which disinformation is a weapon," Morawiecki said.

The premier issued his strong remarks as he prepared to meet with EU leaders at a time when Warsaw is facing not only a border crisis but heightened tensions with Brussels over allegations it is breaching its commitment to the bloc's democratic principles.

Poland accuses Belarus of luring would-be migrants – mostly from the Middle East – to gather at the border, promising them an easy crossing into the European Union. Belarus has denied the accusation and criticized the EU for not taking in the refugees.

Belarusian leader Alexander Lukashenko "launched a hybrid war against the EU. This is [the] greatest attempt to destabilize Europe in 30 years," Morawiecki said on Twitter, referencing the end of the Cold War.

"Poland will not yield to blackmail and will do everything to defend the EU's borders."

He posted a link to a video statement in which he warned that "today the target is Poland, but tomorrow it will be Germany, Belgium, France or Spain."

In what was seen as a slight easing of tensions this week, Belarus cleared the two camps that had been built along the border. Polish authorities, however, said that illegal crossings were still taking place.

"On Saturday, a group of about 100 very aggressive foreigners who were brought to the border by Belarusian soldiers attempted to enter Poland by force. Security forces prevented this," the Polish border guard said on Sunday.

The migrants have spent thousands of dollars to fly into Belarus on tourist visas. Many are fleeing war and poverty in the Middle East.

But at the Belarusian border, they have faced squalid and freezing conditions. Caught in the middle, many often report being forced to cross the border by Belarusian officials, only to then be pushed back into Belarus by Polish authorities.

Polish media say at least 11 migrants have died since the crisis began over the summer.