Germans view trans-Atlantic relations much more positively than they did 12 months ago, according to a new survey. Meanwhile, doubts have been cast over Olaf Scholz's ability to represent Germany on the global stage. 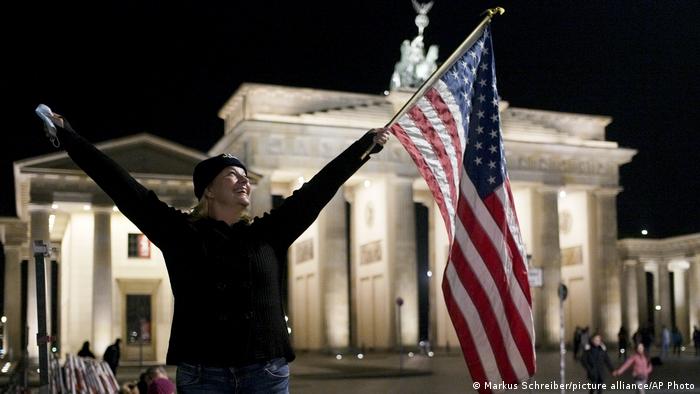 More than 70% of Germans view their country's relationship with the United States as positive, a marked increase compared with a year ago, according to a new survey carried out by the Kantar research institute on behalf of the Körber Foundation.

With Joe Biden in the White House, 71% of Germans see relations between the countries as "good" or "very good," compared with 18% who saw it that way under his predecessor, Donald Trump.

The results of the survey, which was published on Monday, also showed that Germans attach greater importance to Berlin's relationship with Washington, than other global ties, with 44% of participants regarding the US as Germany's most important partner, ahead of France on 27%.

"It is gratifying that the Trump years have not led to an irreversible alienation between Germans and Americans. Whether the positive trend will continue, however, remains to be seen. Not least because a number of trans-Atlantic issues remain unresolved," said Nora Müller, Head of International Politics at the Körber Foundation, a nonprofit organization that focuses on social and political issues.

The feeling appears to be mutual. A parallel study carried out by the Pew Research Center gauging US public opinion on global relations found that 85% of US respondents rating their country's relationship with Germany as good or very good, up 11% on a year ago.

The survey, named "The Berlin Pulse" and conducted in September and October among more than 2,000 eligible German voters, looked at a range of international issues, including foreign policy prospects under the next chancellor.

Social Democrat Olaf Scholz is in pole position for that role following national elections in September, but respondents were uncertain as to whether he could represent their country's interests on the global stage, particularly in comparison with the person he hopes to succeed: Angela Merkel.

Just 14% of respondents believed that Scholz could do better than Merkel in this respect, with almost twice as many suggesting that he would fare worse than the current chancellor.

When asked about the important objectives that Germany's next chancellor will have to deal with in regard to matters relating to the European Union, the strengthening of the EU's foreign and and security policy (65%) was ranked top, followed by adhering to the Paris Climate Agreement (58%).

German Christmas markets to be canceled?

Participants were also asked what challenges Germany faces in regard to global foreign policy, with the instability in Afghanistan of most concern.

The second-biggest challenge comes in the form of combating the dire effects of climate change, according to respondents.

For the first time since 2017, China's growing influence is perceived negatively by a majority of majority of Germans (55%), while 9% see Beijing's exertions as positive, and 34% of participants view the issue neutrally.

Compared with Russia, China is also perceived as a greater threat to German values. While 26% see Beijing as a major threat, only 16% of respondents said the same about Moscow.

Von der Leyen kicked off the international security meeting by calling for a more globally committed United States. The US Defense Secretary affirmed the importance of Europe to the US and praised German troops.