German, US defense ministers pledge commitment to transatlantic relationship | World | Breaking news and perspectives from around the globe | DW | 17.02.2017

Von der Leyen kicked off the international security meeting by calling for a more globally committed United States. The US Defense Secretary affirmed the importance of Europe to the US and praised German troops.

Von der Leyen told the assembled international government representatives and security experts that Germany realized it had to shoulder a greater burden of the cost of NATO.

"NATO is not self-evident, not for America and not for us Europeans. We must all be confident that our common interests and our principles and values are held up.

"And this also means that we are waging the fight against transnational terror together, especially Islamic State."

Ursula von der Leyen: 'Fight against terrorism, not against Muslims'

"We should be wary of shifting this struggle into a front against Islam and Muslims. Otherwise, we are in danger of deepening the trenches from which violence and terror are growing. Rather, it remains proper to seek partnerships with like-minded Muslim and Arab states."

Mattis - one of the 'reliable personalities'

In statements made to DW, von der Leyen called US Secretary of Defense Jim Mattis "reassuring" and one of the "reliable personalities" in the Trump administration.

Her remarks came after Mattis had taken the MSC stage and provided strong assurances on the US commitment to the transatlantic relationship.

"The transatlantic bond remains our strongest bulwark against instability and violence," Mattis told the assembled group of leaders. "I am confident that we will strengthen our partnerships, confronting those who choose to attack innocent people or our democratic processes and freedoms."

Mattis' statements diverged from some of those made by US President Donald Trump, who at various points during his campaign expressed skepticism towards the importance of traditional diplomatic ties between Europe and the US.

"American security is permanently tied to the security of Europe," Mattis later added.

A harder line on Russia than his boss

"We all see our community of nations under threat on multiple fronts as the arc of instability builds on NATO’s periphery and beyond," Mattis said.

His remarks echoed those made Wednesday in Brussels at a NATO summit, where he took a firm line on Russia, calling on the country to observe international law and distancing the US from potential military cooperation with Moscow in the near future. As with his comments on transatlantic ties, Mattis' expressions of distrust towards Russia contrast Trump's stance on closer relations between Moscow and Washington.

However, Mattis reiterated NATO members must contribute a "proportionate share" to the military alliance's funding.

"It is a fair demand that all who benefit from the best alliance in the world carry their proportionate share of the necessary costs to defend our freedoms," the Secretary said. 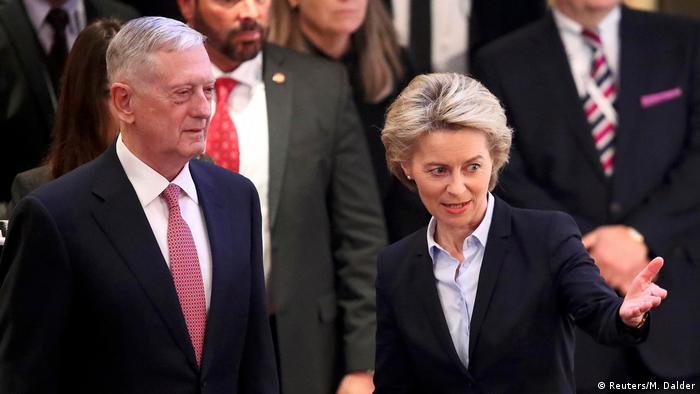 Praise for the German military

Mattis also used his MSC speech to praise German military forces. He cited his "great respect for Germany’s leadership in Europe - and for the ethical performance of your troops on the battlefield" one day after Lithuanian authorities revealed reports of rape by a German NATO soldier were, in fact, fake news. NATO has alleged Russian involvement.

More than 500 participants were expected to attend the MSC, including US Vice President Mike Pence, who will address the group on Saturday. White House advisors said Pence's trip to Germany and Belgium was aimed at reassuring European and Middle Eastern partners about the US commitment to NATO and the European Union.

The issues discussed at this year's conference will be informed by The Munich Security Conference annual report published this month, which warns against the rise of populism threatening the international order.

"Never before have there been so many foreign policy question marks," the head of the Munich Security Conference Wolfgang Ischinger said ahead of the opening.

The discourse of international security has shifted as a result of populist rhetoric making its way to the world stage. But domestic politics shouldn't undermine norms regulating world affairs, writes DW's Lewis Sanders. (16.02.2017)

German Defense Minister: 'I am happy to see how deep transatlantic bonds are'

The timing of the Munich Security Conference gave Germany a chance to underline its commitment to trans-Atlantic alliances. But the Ukrainian president warned that old international security structures are under threat.

For the first time in decades, Russia has snubbed a major international summit in southern Germany. Meanwhile, western leaders meeting in Munich were struggling to find a diplomatic way forward on the Ukraine crisis.