Emails accusing German soldiers stationed in Lithuania of rape were sent to local news outlets and the parliamentary president. NATO officials allege that Russia is targeting the military alliance. 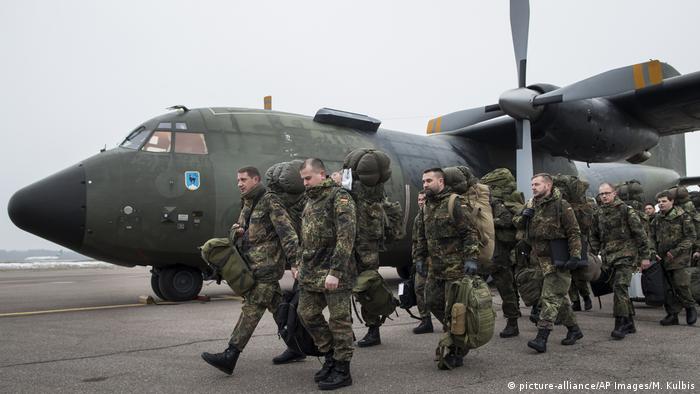 German soldiers stationed in Lithuania have been the target of false rape claims, German news magazine "Der Spiegel" first reported on Thursday. NATO diplomats told "Spiegel" that they viewed this as an attack aimed at undermining the presence of the North Atlantic Treaty Organization (NATO) in eastern Europe, likely perpetrated by Russia.

Emails claiming that German soldiers had raped an underage Lithuanian girl were sent to the president of the Lithuanian parliament and various Lithuanian media outlets on February 14.

Lithuanian authorities investigated the charges and found no evidence that any of the claims made in the emails were true. "To our knowledge, Lithuanian police investigations came to the conclusion that there were neither a victim nor possible witnesses nor any perpetrators", a spokesperson for the German ministry of defense said.

Some smaller local news outlets reported on the charges, according to Spiegel, but Lithuanian officials quickly discounted the accusations.

Lithuanian police is investigating the incident. The address from which the emails accusing the soldiers were sent no longer exists, according to the German defense ministry, but authorities are looking to track the IP-address.

NATO Secretary General Jens Stoltenberg told reporters in Brussels that there had been several previous attempts to spread disinformation about NATO and that the organization was on constant alert.

The German troop presence in Lithuania is part of an "enhanced forward presence" mission in NATO's Eastern territories. The military alliance made up of Canada, the United States and 26 European countries is upping its military presence in response to Russia's annexation of Crimea and the Kremlin's involvement in the conflict in Eastern Ukraine. NATO troops are stationed in Poland and in the three Baltic states - Lithuania, Estonia and Latvia. Germany is heading the recently begun mission in Lithuania and deployed its first soldiers in early February.

For many Germans, the alleged misinformation campaign in Lithuania echoes the "Lisa case". In early 2016, Russian media outlets picked up the story of a 13-year old Russian-German girl named Lisa who claimed that she had been abducted and raped by Arab refugees in Berlin – a lie the girl had made up in order to not get in trouble with her parents after spending the night at male friend's place. Hundreds of Russian-Germans took to the street in protests in response to the reports, claiming that German authorities were neglecting the "Lisa case" for political reasons.