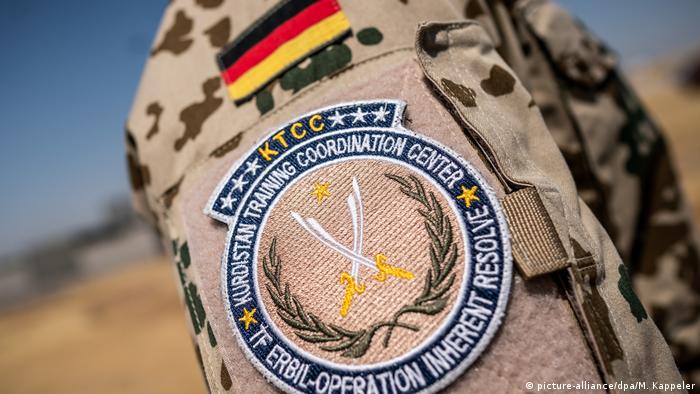 Germany has reduced the number of its troops stationed in Iraq due to growing regional security concerns, the Bundeswehr confirmed via a press release on Monday.

Overnight, 35 German soldiers were brought to either Kuwait or Jordan, the military said.

"These forces can be brought back at any time if training in Iraq is to resume."

The German military contingent in the country will be "temporarily thinned out," with around 30 out of the 130 personnel serving in the country to be redeployed to neighboring countries, Foreign Minister Heiko Maas and Defense Minister Annegret Kramp-Karrenbauer had said in a letter to their ministries.

The transfer mainly applied to soldiers stationed in Iraq's capital, Baghdad, and Taji to the north.

The German Bundeswehr supports regional efforts against Islamic State in Iraq, providing military training, Tornado reconnaissance jets and tanker aircraft for air-to-air refueling. Most of Germany's soldiers in Iraq are stationed in the northern Kurdish region of the country.

"Naturally we will respect any sovereign decision of the Iraqi government," said Maas, while warning that the reduction of international forces could lead to Islamic State gaining a stronger foothold in the region and cause "greater instability" in Iraq.

Why is Germany reducing troop numbers?

DW political correspondent Thomas Sparrow said one reason that Germany was reducing troop numbers was "the security of German soldiers, similar to what NATO has already done."

The fear is that some soldiers being trained by German troops sympathize with Iranian and Iraqi militias and could turn the weapons on the service personnel training them.

Sparrow said another reason is that the German government has removed them while it awaits a final decision by the Iraqi government on foreign coalition forces fighting IS in Iraq.

The redeployment is intended only as a temporary measure, with the letter from Maas and Kramp-Karrenbauer saying, "In principle, we are prepared to continue providing our proven support within an internationally coordinated framework as long as this is something that Iraq wants and is in a situation to permit it."

"When the training is able to resume, the military personnel can be reinstated," the ministers added.

The Pentagon has denied any plans to exit Iraq, and a top general said the letter was sent by "mistake." Germany is preparing to "temporarily" move soldiers out of the country, according to media reports. (06.01.2020)

Once again, Europe is suffering under the way Donald Trump makes political decisions on the fly. The only option left is to appeal to Iran's interest in self-preservation, says DW's Barbara Wesel. (06.01.2020)

Crowds of mourners gathered in Kerman, the hometown of Iranian General Qassem Soleimani, for the final stage of his funeral procession. Soleimani was killed in a US airstrike in Baghdad on Friday. (07.01.2020)