Parliament has voted to ask the government to end an agreement to host US troops in Iraq. The move would oust all foreign soldiers, including those from Germany. President Trump has threatened Iraq with sanctions. 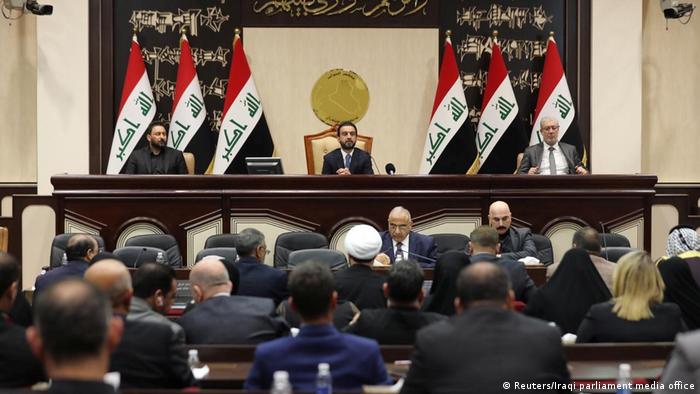 The Iraqi parliament has voted to remove US troops from Iraq. In an extraordinary session, lawmakers backed a resolution to ask the government to end an agreement with Washington to station 5,200 troops in Iraq.

Sunday's resolution specifically calls for ending a 2014 agreement that allows Washington to send troops to Iraq to help in the fight against the "Islamic State" group.

"The government commits to revoke its request for assistance from the international coalition fighting 'Islamic State' due to the end of military operations in Iraq and the achievement of victory," the resolution read.

"The Iraqi government must work to end the presence of any foreign troops on Iraqi soil and prohibit them from using its land, airspace or water for any reason."

The move provoked a swift response from Washington, as it expressed its disappointment with the decision.

"We strongly urge Iraqi leaders to reconsider the importance of the ongoing economic and security relationship between the two countries and the continued presence of the Global Coalition to Defeat ISIS," said a State Department spokesperson.

"We believe it is in the shared interests of the United States and Iraq to continue fighting ISIS together," and that the US is still "committed to a sovereign, stable, and prosperous Iraq."

President Donald Trump has threatened Iraq with debilitating sanctions, should the Middle Eastern country force US troops to leave.

The decision to expel forces from the country also includes representations from other nations, among them Germany. Foreign Minister Heiko Maas expressed his concerns over the increasing tensions in the Middle East, but also iterated that the Iraqi government's position must be respected.

"Our overriding interest is that stability and unity in Iraq is not falling victim to the recent escalation," Maas stressed late Sunday. On the Iraqi government, he added: "We will respect every decision."

The German government said late Sunday that its military presence in Iraq would "only remain if the Iraqi government wanted that."

Read more: Pressure mounts on US troops in Iraq

Adel Abdul-Mahdi, Iraq's caretaker prime minister, said officials are preparing a memo for legal and procedural steps to implement parliament's resolution. He also said that if US troops remains then they will be considered an occupying force.

"Despite the internal and external difficulties that we might face, it remains best for Iraq on principle and practically," he told parliament.

What does the resolution mean?

The resolution is nonbinding, but it is likely to be heeded by the government as Abdul-Mahdi supports the measures.

The resolution was passed two days after the killing of Iranian Major General Qassem Soleimani in Baghdad by US airstrikes.

Populist Iraqi Shiite cleric Moqtada al-Sadr has called for a more substantial response to the killing.

"I consider this a weak response, insufficient against American violation of Iraqi sovereignty and regional escalation," said al-Sadr, who leads the largest bloc in parliament, in a letter to the assembly read aloud by a supporter.

Prime Minister Abdul-Mahdi also told parliament that Soleimani was due to meet with him the day he was killed and deliver a response from the Iranians to a Saudi message that could have led to a de-escalation of tensions in the region, according to the Reuters news agency.

Iraqi officials have also summoned the US envoy to Iraq, Matthew Tueller, over the airstrikes.

"[The airstrikes] were a blatant violation of Iraqi sovereignty," Iraq's Foreign Ministry said in a statement on Sunday. They "contradict the agreed-upon missions of the international coalition."

The Foreign Ministry has also lodged an official complaint with the UN secretary-general and the Security Council over the US airstrikes.

The complaint mentions "American attacks and aggression on Iraqi military positions and the assassination of Iraqi and allied high-level military commanders on Iraqi soil," according to the Foreign Ministry.

Later Sunday, at least three explosions reverberated across the Iraqi capital as sirens could be heard near the Tigris River.

The blasts appeared to be mortars or rockets that landed inside, or near, the heavily fortified Green Zone, home to the US Embassy and a number of other foreign diplomatic missions, as well as the seat of Iraq's government.

Initially, at least, no casualties were reported after what was the second attack in the last 48 hours.

The country's top police institution fears Israeli and US facilities could be targeted by terrorists following the assassination of Iranian General Qassem Soleimani. Many German states are already on high alert. (04.01.2020)