The US assassinated Iran's top army general Qassem Soleimani by drone strike on Friday. DW takes a look at how Germany's domestic press reported the news. 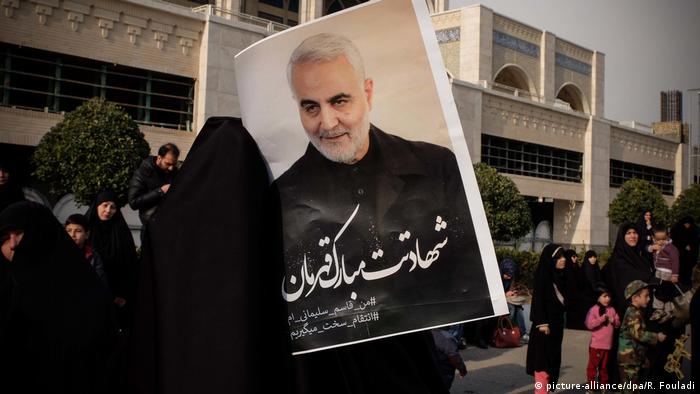 On Friday US President Donald Trump gave the go-ahead for the US military to assassinate Qassem Soleimani, leader of the Iran Revolutionary Guard's elite Quds Force. World leaders and officials have voiced their opinions, covering everything from restraint and reservation to praise. Here is where the German press stand on the incident:

Die Welt took a congratulatory tone after the US took the decision to shoot and kill the top general saying: "One thing is clear: The world is a better place without Qassem Soleimani. Iran is ultimately the world's greatest sponsor of terrorism, and Soleimani was Iran's top terrorist." The newspaper added that Soleimani had been responsible for attacks against civilians across the world, including Europe.

The publication disputes that the act would lead to war, writing "the mullahs know that they could not win a real war against the US. Soleimani's death is a significant turning point."

Süddeutsche Zeitung agrees that the Soleimani was "without doubt the author of untold pain and suffering in the Middle East" but cautions that "above all his death will be the beginning of new violence and instability. This will sweep across Iraq and from Yemen to Syria in places that Soleimani placed his marionettes. It is not only an experience unique to the US in the region: A power vacuum in the Middle East will always be filled with violence."

Germany's Frankfurter Allgemeine drew comparisons between the recent attempted embassy storming in Baghdad and the 1979 US embassy occupation in Tehran, saying "these images awake an American trauma that has lost little of its potency" and suggests this could have influenced Trump's decision to act.

FAZ said the incident had created a "storm of domestic politics" in the US, and that the Democrats "saw the act infringe upon Congress' prerogative to declare war," before adding that Trump was not likely to take guidance from a system that was "intended to separate power." FAZ ends its assessment by saying: "Perhaps he (Trump) really believes the opponents will give in because the US military might makes them tremble."

Zeit focused on Trump's broken campaign promise, writing that he will no longer go down as "a hero" who withdrew from "endless war." The newspaper argues that "should Iran hit back, targeting the world's oil supply or against the American military, Trump will remain the reason behind a campaign launched against a land of 80 million people. In comparison, the Iraq war started by George W. Bush will seem like a walk in the park."

Finally, the TAZ also highlights Trump reneging on his campaign promise and adds that "the US makes the same mistake once again, it thinks only about playing the next immediate move, and in doing so loses the overall view of the entire chess match." The article argues that Iran now has the upper hand in many ways: not only with its ability to fight an asymmetric war, but also because Trump has used up all his options after canceling the 2018 nuclear agreement with Iran and had already imposed harsh sanctions.

The US assassination of Iran's Qassem Soleimani amounts to an act of war with untold consequences. The question is how, when and where Iran will strike back and whether that triggers a wider conflagration. (03.01.2020)

The US and Iran: Decades of enmity