The US killing of Iran's Qassem Soleimani could be seen as an act of war with untold consequences. The question is how, when and where Iran will strike back — and whether that triggers a wider conflagration. 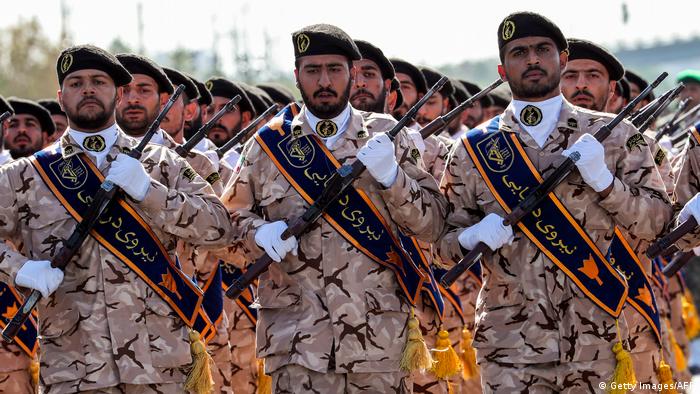 The US killing of Major General Qassem Soleimani, the commander of the Iranian Revolutionary Guard Corps' elite Quds Force, near Baghdad's airport is a seminal event that brings Washington and Tehran to the brink of a major conflict across the Middle East.

A spymaster, military operative and diplomat wrapped into one, he was one of the Islamic Republic's most powerful men — and according to one poll, the most popular public figure — responsible for regional policy in Iraq, Lebanon, Syria, Yemen and beyond.

His killing creates further impetus for a vicious circle following a series of escalations since the US withdrew from the Iran nuclear deal in 2018, imposed crushing sanctions and declared economic warfare under its "maximum pressure" campaign without providing a diplomatic off-ramp to deescalate.

Viewed from Tehran, Soleimani's heroic "martyrdom" is an act of war building on other "criminal" acts committed by the United States.

"This doesn't mean war, it will not lead to war, and it doesn't risk war. None of that. It is war," Andrew Exum, a former US deputy assistant secretary of defense for Middle East policy, wrote in The Atlantic.

Hamidreza Azizi, an assistant professor at Shahid Beheshti University in Tehran, said that if Iran doesn't act on threats to retaliate it will lose face both domestically and externally.

"The Islamic Republic has produced a narrative of strength inside the country and the weakness of enemies. This will be broken if Iran stands idly," he said. "Not responding will send a message to US and Israel to double down on targeting Iranian interests. Iran is facing a very hard choice."

It's unclear how, when and where Iran will retaliate, but it will be forced to respond directly or indirectly at a time and place of its choosing, raising questions as to whether that will pull the US deeper into a military conflict. Any reprisal against the US military, interests or allies will be viewed by Washington as a reason to escalate further after the Trump administration justified the killing as an act of "deterrence" and preemption against alleged attacks being planned against the United States.

"The so-called 'rules of engagement' have been broken. This means that increasingly preemptive attacks will replace the condition of deterrence which offered a measure of stability," said Max Abrahms, a professor at Northeastern University and fellow at the Quincy Institute think tank.

"The killing of Soleimani will definitely not deter the Revolutionary Guard," he said. "We should expect a variety of asymmetric responses from Iran."

Activating the 'axis of resistance'

Last year, Iran threatened "to set fire to the interests of America and its allies" in the region if it were attacked. It has already proven willing to test the United States and regional states, raiding ships in the Persian Gulf, allegedly attacking SaudiAramco oil facilities with missiles and drones and shooting down a US drone. But the Islamic Republic also knows that a full-blown war with the US could threaten the regime's survival.

Iran has ample regional allies and proxies under its "axis of resistance" to wage asymmetric warfare and a ballistic missile capability to impose costs on the United States in Iraq, Israel, Syria, Lebanon, Yemen, Afghanistan and the Persian Gulf. They could also strike further afield, attacking American embassies across the globe or activate operatives in the United States or elsewhere.

The easiest and least risky place for Iran to respond would be in Iraq, where the Revolutionary Guard has developed a web of Iranian-backed proxy forces and political allies that makes it a kingmaker in the country's politics.

It is also in Iraq, where the US drone strike killed eight others and Abu Mahdi al-Muhandis, the deputy leader of the state-sanctioned Popular Mobilization Units formed to battle the "Islamic State," that the United States is particularly vulnerable and finds itself in an increasingly untenable position.

One consequence for the United States is that Iran's allies in the Iraqi parliament and government have been boosted by US "violations of sovereignty" to hasten calls for some 5,000 US troops to be evicted from the country.

Such an event would effectively cede to Tehran primacy in Iraq at a time when the country is politically unstable following nearly three months of deadly anti-government protests, which have also been directed at Iranian meddling. Meanwhile, US forces and diplomats remain vulnerable to attack from pro-Iranian militia that are officially part of the Iraqi security forces.

If it chose to ratchet up escalation in a wider war scenario, Iran could strike further afield by directly or indirectly targeting US military assets in the Persian Gulf, or it could bring the world economy to a standstill by blocking oil running through the Strait of Hormuz to global markets. The United Arab Emirates and Saudi Arabia could also find themselves in the crosshairs in a proxy response or larger conflagration.

US ally Israel, which has carried out hundreds of attacks on Syrian government forces and pro-Iran groups in Syria in a shadow war against its Iranian nemesis, is bracing itself for fallout from Iran-backed militants in Gaza, Hezbollah in Lebanon and Iran-linked forces in Syria.

Iran's irregular tactics across the region, known as "forward defense," are designed to surprise and stretch enemy resources in a bid to keep fighting away from its soil.

"In some respects it follows an old analogy of it being easier to fight a bear than a dozen rattlesnakes, some hidden from view," retired US Marine Corps Lieutenant General Paul Van Riper told DW last year, summarizing some of the dynamics of a potential conflict.

"Few wars turn out to be quick and decisive," he said. "The real problem is that every war has its own dynamics and the ability of any government to forecast with certainty how things will turn out is nil."

At least 3,000 more US troops will be deployed to the Middle East after the killing of a top Iranian commander. Tehran vowed to "retaliate" over a US airstrike in Baghdad that killed Qassem Soleimani. (03.01.2020)