A series of rockets have targeted the highly fortified Green Zone in Baghdad, as well as an air base housing US troops. The explosions come on the heels of a US airstrike that killed top Iranian general Qassem Soleimani. 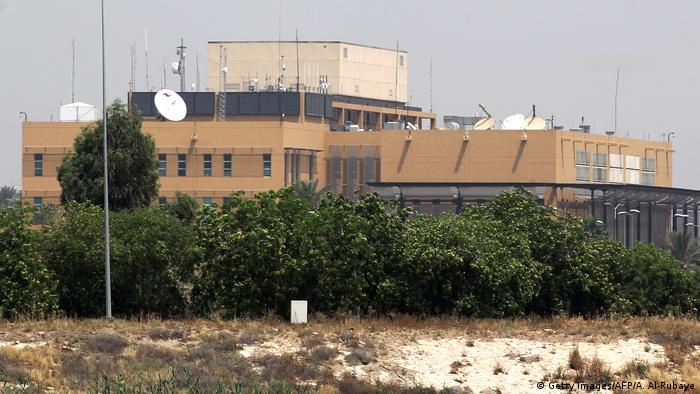 Several rockets fell in and around Baghdad on Saturday evening, including an attack targeting an air base housing US troops, the Iraqi military said in the wake of the killing of Iranian General Qassem Soleimani.

The rockets fell in the city's Jadriya neighborhood as well as the heavily fortified Green Zone, which houses government buildings and several foreign missions including the US Embassy.

The US-led military coalition fighting "Islamic State" in the region confirmed that two rockets struck near Iraqi bases hosting US troops in Baghdad and Balad, around 80 kilometers (50 miles) north of the capital. It said no soldiers were injured, but added that civilians may have been harmed.

The Iraqi military said in a statement that there was "no loss of life."

Security sources told news agency Agence France-Presse that surveillance drones were sent out above the base to locate the source of the rockets.

Police sources told Reuters news agency that five people were injured during mortar fire in the Jadriya neighborhood, which is close to the Green Zone.

Iran has vowed a harsh retribution for the targeted killing of Soleimani, bringing Washington and Tehran to the brink of a major conflict that could soon play out across the Middle East.

The killing has caused regional tensions to soar and sparked concerns from the US of a possible backlash against its embassy and bases where US troops are stationed in Iraq. US President Donald Trump has threatened to hit 52 Iranian sites "very hard" if the Islamic republic attacks Americans or US assets.

In the aftermath of Soleimani's death, NATO has suspended its training mission for soldiers in the Iraqi army, saying security concerns for its personnel were "paramount."

European leaders have called for calm after the US airstrike that killed Iranian General Qassem Soleimani. Anti-war protests have broken out across the globe, most notably in Washington and London. (05.01.2020)