Iran army: US lacks 'courage' for conflict after Trump threats

Donald Trump warned Iran would be hit "very hard" if Tehran retaliated against the US, saying "52 sites" were targeted. But Iran's army chief said the US lacked the "courage" to initiate a conflict. 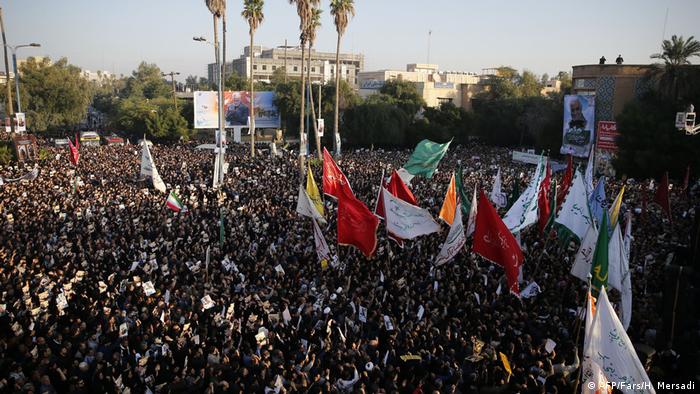 Iran's army chief on Sunday said the US lacked the "courage" to initiate a conflict, after US President Donald Trump warned the US would hit dozens of targets in the Islamic Republic if Tehran attacked.

"I doubt they have the courage to initiate" a conflict in which the Americans threatened to strike 52 targets, Major General Abdolrahim Mousavi said, as quoted by state news agency IRNA.

The president said the US was targeting 52 sites in Iran and would hit them "very fast and very hard" if Tehran attacked American personnel or assets.

Trump began his series of tweets by saying: "Iran is talking very boldly about targeting certain USA assets as revenge for our ridding the world of their terrorist leader who had just killed an American, & badly wounded many others, not to mention all of the people he had killed over his lifetime."

He continued: "Let this serve as a WARNING that if Iran strikes any Americans, or American assets, we have targeted 52 Iranian sites (representing the 52 American hostages taken by Iran many years ago), some at a very high level & important to Iran & the Iranian culture, and those targets, and Iran itself, WILL BE HIT VERY FAST AND VERY HARD."

Trump concluded with a stern warning for Tehran: "The USA wants no more threats!"

Trump's words came in stark contrast to those from Europe, with Germany, France and the EU all seeking compromise in order to de-escalate tensions in the Middle East.

Meanwhile, the White House has sent a formal notification to Congress under the War Powers Act of the airstrike that killed Soleimani at the Baghdad airport on Friday, according to a senior official.

The notification was classified and it was not known if a public version would be made available, but House Speaker Nancy Pelosi said the report "suggests Congress and the American people are being left in the dark about our national security.'' 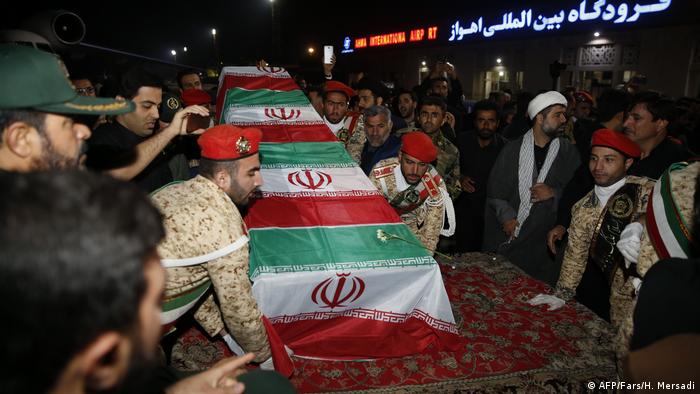 Soleimani's body was returned to Iran on Sunday

On Sunday, Soleimani's body was returned to Iran, according to the Islamic country's IRIB news agency.

The body was reportedly flown to the city of Ahvaz from Iraq, as IRIB posted a video of a casket wrapped in an Iranian flag being unloaded from a military plane. State television broadcast a live program showing thousands of mourners dressed in black in the southwestern city.

Iranian Supreme Leader Ayatollah Ali Khamenei is expected to lead a prayer ceremony for Soleimani at Tehran University on Monday, whereas the general's funeral will be held in his hometown Kerman on Tuesday.

Iran has forced America's hand, and potentially pushed its troops out of Iraq. But effects of the US strike on Iran's top military figure may not be what the White House hoped for, says guest contributor Rainer Hermann. (04.01.2020)

A series of rockets have targeted the highly fortified Green Zone in Baghdad, as well as an air base housing US troops. The explosions come on the heels of a US airstrike that killed top Iranian general Qassem Soleimani. (04.01.2020)