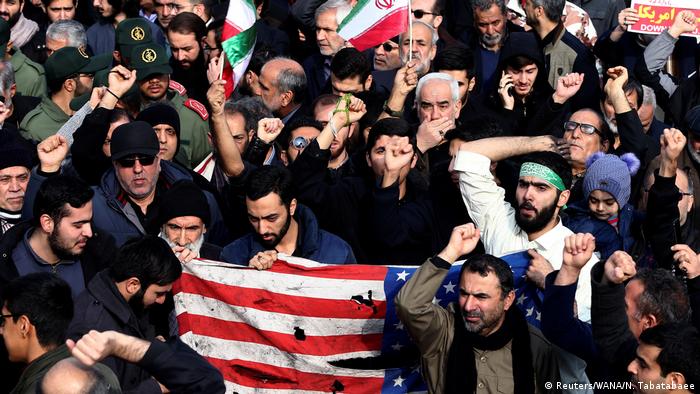 Germany's foreign minister said Saturday he is hoping for direct talks with Iran, in addition to the country's European partners and the United Nations, as a way of de-escalating tensions in the Middle East following the US assassination of  Iranian General Qassem Soleimani.

Heiko Maas told the German newspaper Bild am Sonntag: "In the coming days, we will do all we can to counteract a further escalation of the situation — in the United Nations, the EU and in dialogue with our partners in the region, including in talks with Iran."

Despite heightened anxiety in the region, Maas said he had no plans to increase Germany's deployment of around 120 troops in Iraq.

"The fight against ISIS is and remains in Germany's interest, and the Bundeswehr is providing important training to this end on the ground," Maas said, using another name for the "Islamic State" group.

Maas told Bild he was in close contact with his British and French counterparts, along with US Secretary of State Mike Pompeo and the EU's foreign affairs chief, Josep Borrell, who has also called for calm following the US airstrike in Baghdad that took out Soleimani on Friday.

The EU urged a "de-escalation of tensions" in the Persian Gulf region after Soleimani's assassination.

A EU press statement on Sunday said that Borrell offered Iranian Foreign Minister Mohammad Javad Zarif to visit Brussels "to continue their engagement on these matters."

The 2015 deal, also known as the Joint Comprehensive Plan of Action (JCPOA), offered Tehran relief from debilitating sanctions in return for restrictions on Iran's attempts to acquire nuclear weapons.

It has been at risk of disintegrating since US President Donald Trump unilaterally withdrew from it 18 months ago and reimposed those economic sanctions.

Borrell said: "Also discussed importance of preserving #JCPOA, which remains crucial for global security. I am committed to role as coordinator."

France also increased its diplomatic initiatives on Saturday as President Emmanuel Macron spoke with Iraqi President Barham Salih. "The two presidents agreed to remain in close contact to avoid any further escalation in tensions and in order to act to ensure stability in Iraq and the broader region," Macron's office said in a statement.

Meanwhile, Pope Francis also urged restraint amid growing tensions in the Persian Gulf. At the Sunday Angelus prayer at the Vatican, the pope spoke of a terrible air of tension that could now be felt in many parts of the world, without mentioning the current Iran-US conflict.

"I call on all sides to keep the flame of dialogue and self-restraint alight and ward off the shadow of hostility," he said. "War only brings death and destruction," Pope Francis added.

'Right to self defense'

British Foreign Secretary Dominic Raab is planning to meet Pompeo in Washington on Thursday, after meeting with his French and German counterparts earlier in the week. Raab said he also spoke to Iraq's prime minister and president to urge efforts to
defuse tensions in the region.

Raab, however, urged Iran to engage in meaningful diplomacy, describing Soleimani as a "regional menace."

"There is a route through which allows Iran to come in from out of the international cold," he told Sky News. "We need to contain the nefarious actions of Iran but we also need to deescalate and stabilize the situation."

"We do not want to see a major war in the Middle East. The only group or players that would benefit from that would be the terrorists and Daesh (Islamic State)," Raab told the BBC.

"It was General Soleimani's job description to engage proxies and militias ... to attack Western countries that were legitimately there and in those circumstances the right of self-defense clearly applies," the British foreign minister said, adding that he understood the US position on the issue.

"There is a right of self defense," Raab said.

Meanwhile, in the US and the UK, people took to the streets to speak out against another potential conflict in the Middle East, as well as to condemn Trump's aggressive actions.

Hundreds of protesters in Washington chanted outside the White House: "No justice, no peace. US out of the Middle East!"

Those chants were repeated in New York's Times Square, with protesters carrying signs that read "Stop bombing Iraq" and "No war or sanctions on Iran."

Similar demonstrations took place in Chicago and other cities across the US, as well as in Berlin, the Bangladeshi capital, Dhaka, and  the Canadian cities of Toronto and Ottawa. 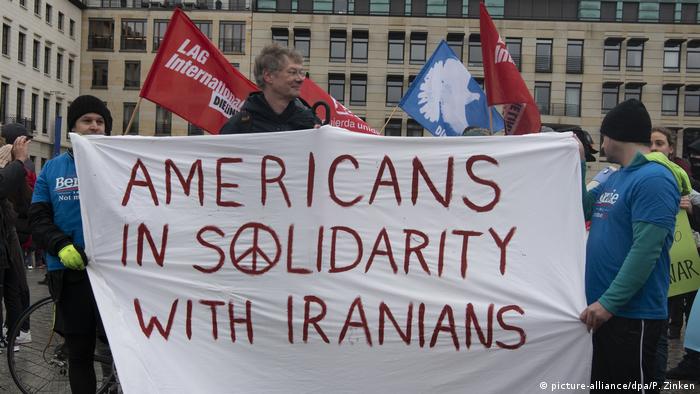 In Berlin, anti-war protesters demonstrated outside the US Embassy

Speakers at the Washington event included actress and activist Jane Fonda, who was arrested at a climate change protest last year.

"The younger people here should know that all of the wars fought since you were born have been fought over oil," Fonda, 82, told the crowd. "We can't anymore lose lives and kill people and ruin an environment because of oil."

Protests also took place in London, with opposition lawmakers keen to avoid a repeat of the 2003 Iraq war.

Labour politician Richard Burgon reminded protesters that former US President George W. Bush had made clear 17 years ago that the United States "would launch war on Iraq, regardless of whether there was UN backing or not."

"And to our shame, our government signed up to that," Burgon said, adding that "hundreds of thousands of Iraqis died, millions of Iraqi lives were destroyed" in the war. "But a war on Iran could be even more deadly. It risks a new full-scale war in the Middle East that could spiral out of control."

British Prime Minister Boris Johnson has thus far not commented on the situation.

'The risk of escalation is very high'

Iran has forced America's hand, and potentially pushed its troops out of Iraq. But effects of the US strike on Iran's top military figure may not be what the White House hoped for, says guest contributor Rainer Hermann. (04.01.2020)