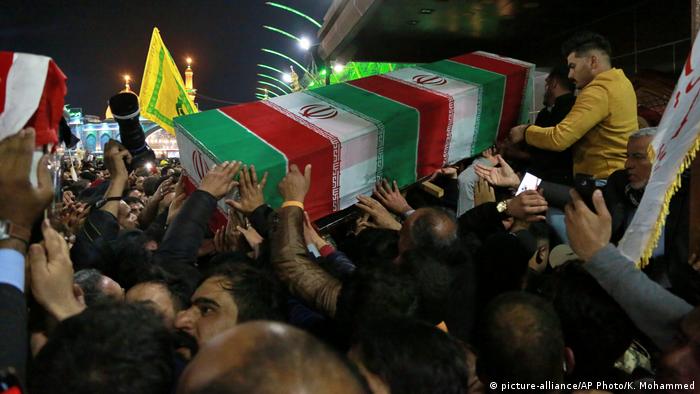 Thousands of people gathered in the streets of Baghdad on Saturday to mourn Iran's slain top general Qassem Soleimani and Iraqi militia leaders killed in a targeted US airstrike a day earlier.

A funeral procession began at the Imam Kadhim shrine, one of the most venerated sites in Shiite Islam, and solemn mourners marched alongside military vehicles.

Many mourners dressed in black and carried Iraqi flags as well as flags of militias that are loyal to Soleimani, who was the head of Iran's elite Quds Force.

Iraq's prime minister, Adel Abdul-Mahdi, was in attendance, as well as Shiite cleric Ammar al-Hakim and other pro-Iran figures in a large crowd surrounding the coffins.

Mourners were also grieving Abu Mahdi al-Muhandis, a senior Iraqi militia commander who was one of nine others killed in the same strike. 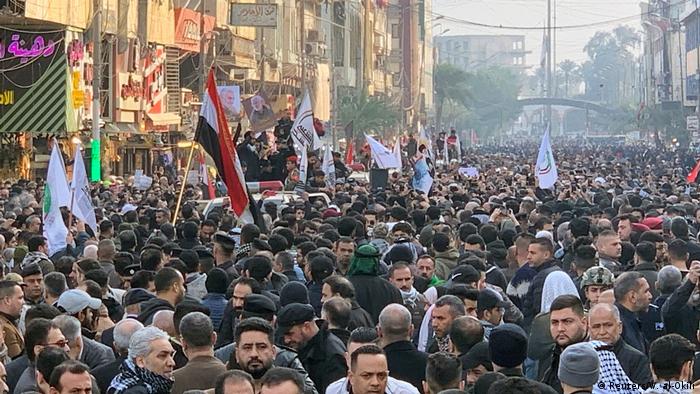 People gather at the funeral of the Iranian Major-General Qassem Soleimani, top commander of the elite Quds Force of the Revolutionary Guards

The Iranian ambassador to the UN described the killing as an act of war, US media reported. Speaking to CNN after the attack, Majid Takht Ravanchi said it "in fact was an act of war on the part of the United States and against the Iranian people."

Soleimani was known as a spymaster, military operative and diplomat, as well as the architect of Iran's regional security strategy. He was responsible for mobilizing militias across Iraq, Syria and Lebanon, including in the war against the "Islamic State".

Soleimani was also blamed for various attacks on US troops and American allies over nearly two decades. 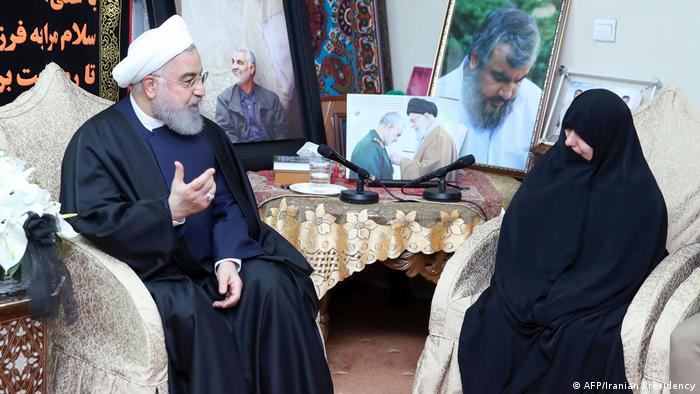 US President Donald Trump said he ordered the strike to prevent an all-out conflict. His administration claims Soleimani was plotting a set of attacks that put American troops and officials at risk, but have yet to provide evidence.

Iran has sworn that there will be harsh retribution for the US' targeted killing of Soleimani, bringing Washington and Tehran to the brink of a major conflict that could play out across the Middle East as other world leaders urge deescalation and restraint.

French President Emmanuel Macron said he would remain in close contact with Iraqi President Barham Salih to try and avert a further escalation in tensions in the region. Macron underlined the importance of Iraq's sovereignty.

"The two presidents agreed to remain in close contact to avoid any further escalation in tensions and in order to act to ensure stability in Iraq and the broader region," according to a statement from the Elysee Palace.

"The safety of our personnel in Iraq is paramount," a NATO statement read. "We continue to take all precautions necessary. NATO's mission is continuing, but training activities are temporarily suspended."

Separately, the German military on Friday said that the US and its allies had suspended training of Iraqi troops due to an increased threat they face after Friday's airstrike, reported the Reuters news agency. About 120 German troops are deployed in Iraq under Operation Inherent Resolve.

Increased tensions
Soleimani's death creates further impetus for a vicious circle following a series of escalations since the US withdrew from the Iran nuclear deal in 2018, imposed crushing sanctions and declared economic warfare under its "maximum pressure" campaign without providing a diplomatic off-ramp to deescalate.

As regional tensions soared in the wake of Friday's attack, there were reports of an airstrike on a convoy of Iran-backed militiamen north of Baghdad in the early hours of Saturday morning. Hours later the Iraqi army refuted that an airstrike had taken place at all. The US-led coalition in Iraq said it did not carry out an airstrike.

The United States has killed Qassem Soleimani, leader of Iran's elite Quds Force, in an airstrike in Baghdad, the Pentagon has confirmed. The move is a potential turning point in the Middle East. (03.01.2020)

Tehran vowed to "retaliate" over a US airstrike in Baghdad that killed Qassem Soleimani. At least 3,000 more US troops will be deployed to the Middle East after the killing of a top Iranian commander. (03.01.2020)