Oil prices soar amid war fears after US killing of Iranian general | Business | Economy and finance news from a German perspective | DW | 03.01.2020

Oil jumped toward $70 a barrel following news on Friday that a US airstrike had killed a top Iranian general in Iraq. As Teheran warned of retaliation, fears of war have emerged in the world’s most important oil region. 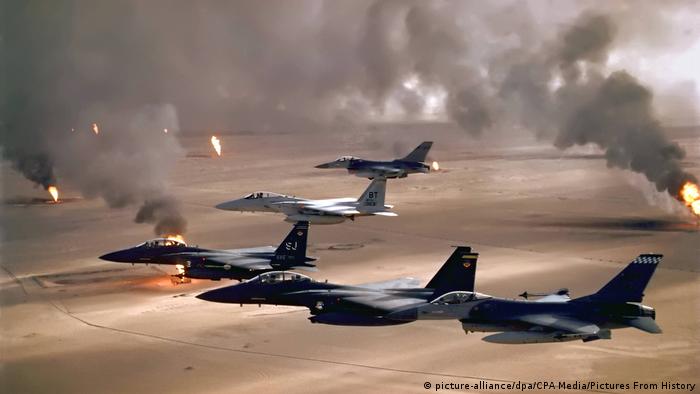 North Sea Brent crude surged 4.4% to $69.16 (€62.02) a barrel on Friday, while US light oil WTI jumped 4.3% to $63.84 amid growing market worries over oil supply in the aftermath of the US attack. Both oil contracts pared the gains later in the day but remained well up.

The head of Iran's Quds Force, Qasem Soleimani, was hit in a a US airstrike on Baghdad's international airport early Friday. US President Donald Trump later tweeted a picture of the American flag, and the Pentagon said he had ordered Soleimani's killing.

Meanwhile, Iran's supreme leader Ayatollah Ali Khamenei warned of "severe revenge" for "the criminals who bloodied their foul hands with his blood," while the country's foreign minister called the move a "dangerous escalation."

While no oil installations or production were affected, targeting one of Iran's most powerful generals heightens tension between Washington and Tehran, raising fears of an armed confrontation that could pull in other countries.

"This is an aggressive show of force and an outright provocation that could trigger another Middle East war," he told the news agency AFP.

The view was shared by Jason Bordoff, a former Barack Obama administration official, who described the attack as "a seismic event" in the region. "This is how US-Iran tit-for-tat spirals out of control. Iran's response will be severe and deadly. And certainly may include escalating attacks on energy infrastructure," he told Bloomberg News.

Eurasia Group's Iran analysts Henry Rome now expects "moderate to low level clashes” in Iraq which would last for at least a month. "Iran will also likely resume harassment of commercial shipping in the Gulf, and may launch military exercises to temporarily disrupt shipping," he told the news agency Reuters.

Also on Friday, the US embassy in Baghdad on Friday urged all citizens to depart Iraq immediately due to heightened tensions.  As a result, dozens of US citizens working for foreign oil companies in the Iraqi oil city of Basra are now preparing to leave the country.

But Iraq's Oil Ministry said in a statement that all oilfields across the country were operating normally and production and exports were not affected.No other nationalities were departing, he added.

Amid renewed oil supply concerns, oil and gas research firm JBC Energy said in a note it expected oil prices to rise further as markets would "retain at least some risk premium."

Already in September, oil prices saw a record surge after attacks on two Saudi Arabian facilities briefly slashed output in the world's top exporter by half. At the time, Donal Trump blamed Iran for the attack and previous other blasts on tankers in the Gulf last year.