Washington will deploy a large force to Saudi Arabia to boost the kingdom's security after the attack on its oil production facility. Both the US and Saudi authorities blamed Iran for the strike. 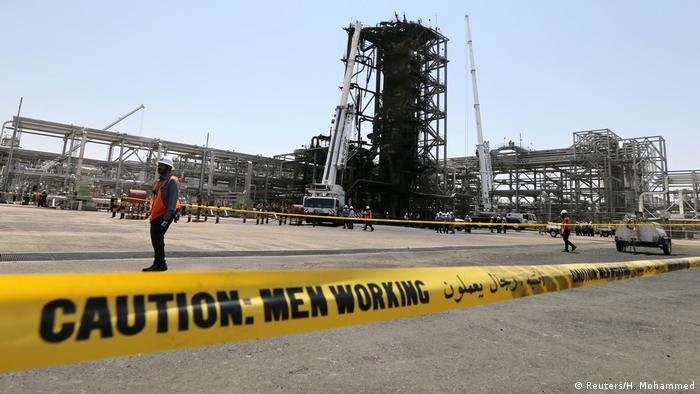 The Pentagon on Friday said it would send thousands of troops and military equipment to Saudi Arabia, a move that follows last month's drone attack targeting the Middle Eastern nation's oil facilities.

Both Washington and Riyadh accused Saudi Arabia's archrival, Iran, of being behind the blasts at the oil processing facilities — a claim that has been rejected by Tehran.

The US had initially pledged to send in more soldiers soon after the attack, saying it was in response to "the kingdom's request." At the time, the chairman of the Joint Chiefs of Staff, Joseph Dunford, said the contingent would be "defensive in nature and primarily focused on air and missile defense."

On Friday, the Pentagon said the deployment would include fighter squadrons, an air expeditionary group and various defense personnel, in addition to two batteries for the Patriot missile defense system and one Terminal High Altitude Area Defense system (THAAD).

"Taken together with other deployments, this constitutes an additional 3,000 forces that have been extended or authorized within the last month," Pentagon spokesman Jonathan Hoffman said in a statement.

US Defense Secretary Mark Esper informed the kingdom's de facto ruler Mohammed bin Salman and the Saudi defense minister of the additional troops deployment on Friday morning, saying it aimed to "assure and enhance the defense of Saudi Arabia," according to the statement.

The move is likely to anger Iran, which has repeatedly denied responsibility for the attack.

The US statement also explicitly notes that the US "does not seek conflict with the Iranian regime."

It was not immediately clear if the new troops will serve as a replacement for other US forces that are expected to leave the region in the coming weeks and months.

Oil-rich Saudi Arabia already wields a robust military arsenal on its own, being the largest buyer of weapons in the world.

The ruling is part of an ongoing clampdown on dissent and minorities in the kingdom. But so far, it's unlikely to have an effect on the kingdom's newly polished image as a global oil provider in times of crisis.