The Iranian government has denied any involvement in the drone attack against Saudi Arabia, but observers say that Tehran is trying to raise the stakes in its tug-of-war with Washington. 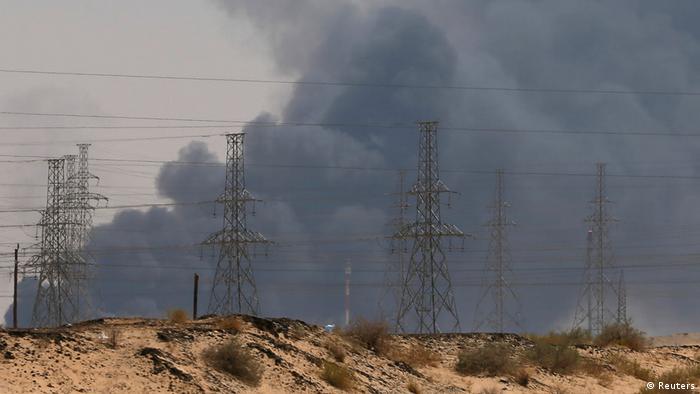 On Wednesday evening, the Saudi government said that Iran was "unquestionably" behind the attacks on its oil fields. Riyadh said investigations had showed that the missiles were not fired from southwestern Yemen, but came from the north. The US had already said over the weekend that Iran was responsible for the drone strikes. However, until now, there has been no indisputable evidence to confirm Iran's role in the attacks.

Yemen's Houthi rebels, which are allied with Iran, claimed responsibility for the attacks, which cut Saudi Arabia's oil-producing capacity by half.

Yemen has been torn apart by a protracted civil war between the internationally recognized government of President Abed Rabbo Mansour Hadi and the Shiite Houthi rebels. In support of the Hadi government, Riyadh launched an air campaign against the Houthis in March 2015. Saudi Arabia accuses Iran of backing the rebels, who have made significant territorial gains in the impoverished Middle Eastern country.

Read more: US backs Saudi 'right to defend itself'

Iran ramping up pressure on the US?

In an official letter to Washington, Iran's Foreign Ministry denied any involvement in the attacks on Saudi oilfields.

"Iran has nothing to do with the attack," according to the letter, which was delivered to the US through the Swiss Embassy in Tehran. Switzerland represents the interests of the United States in Iran. The letter further stated: "If there is any (military) action against Iran, we will promptly retaliate and the dimensions would not be limited."

"Iran's strategy is exactly this: If it is attacked militarily, the whole region will be dragged into an extensive war. Tehran wants to scale up the costs of the conflict with the US and its allies," Farzaneh Roostaei, a journalist and an expert on Gulf military issues, told DW. The expert said she does not believe that Iran has "nothing to do" with the attack on Saudi oil fields. "It is obvious that Iran is trying to pressure the US with the help of the Houthis and other Shiite militias," she added.

In May 2018, the US withdrew from an international nuclear deal with Tehran and, in line with its strategy of "maximum pressure," imposed an array of sanctions against the Islamic country. US President Donald Trump said the pressure would force Iran to sign a new, comprehensive agreement, which would also take into consideration Tehran's regional politics and missile program.

Saudi Arabia, the most important US ally in the Persian Gulf and Iran's archrival, supports Trump's maximum pressure policy.

For decades, Riyadh and Tehran have been engaged in a dangerous tug-of-war to gain supremacy in the Middle East.

"Saudi Arabia is the most important buyer of American weapons. 10% of all US weapons exports go to Saudi Arabia," Michael Lüders, a Middle East expert, told DW. "Despite that, a few simple drones were enough to bring key parts of the oil-producing industry to a standstill. It was a terrible embarrassment for Saudi Arabia," he said.

Saudi Crown Prince and Defense Minister Mohammed bin Salman said the drone strike was a "real test of the global will" to react to such actions, which endanger international security and stability. President Trump announced that the US would "substantially increase" sanctions against Iran.

Iran under pressure — also from within

Iran is already under enormous pressure from UN sanctions. Almost every day, the country is witnessing protests that are brutally suppressed by security forces. On Monday, hundreds of workers of the Heavy Equipment Production Company (HEPCO) in Arak in western Iran took to the streets to demand their salaries, which they haven't been paid since June.

The biggest heavy machinery manufacturer in the Middle East is now close to bankruptcy.

The growing pressure from outside and within Iran has its consequences. "Iran's strategic patience is running out," Ellie Geranmayeh, an Iran expert at the European Council on Foreign Relations, said.

At first, Iran hoped that the Europeans and the Chinese would work out some kind of an economic package, Geranmayeh said. "In this manner, it could have waited for the next presidential elections in the US and hoped for a Democratic Party winner. However, the failing economy has exasperated this plan."

The expert underlined: "Initially, and in a controlled manner, Iran violated its obligations under the nuclear deal. Now, it also seems to be building pressure at the regional level."

Although the extent of Iran's involvement in the Saudi attacks is still unknown, Tehran's military ambitions and abilities, including the capability to conduct asymmetric warfare, have become pretty obvious. Experts say that by pursuing this strategy, Iran has been able to attract global attention, which could be useful in getting the US oil embargo reversed.