Pressure mounts in Iraq to boot out US troops 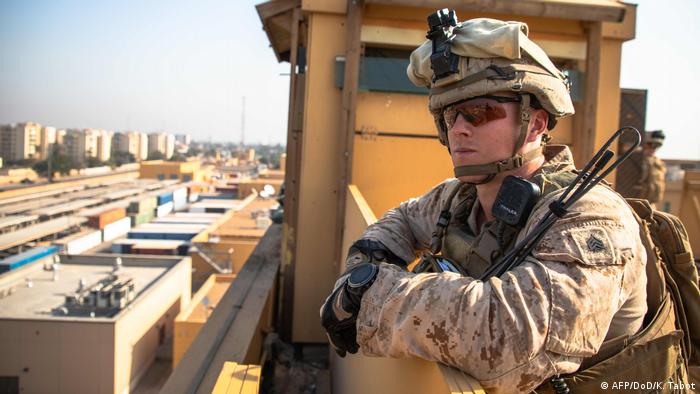 The US strike killing Major General Qassem Soleimani, the commander of the Iranian Revolutionary Guard Corps' elite Quds Force, near Baghdad's airport on Friday was intended to deal a blow to the heart of Iran's Middle East policy.

Instead, that brazen action has facilitated conditions for Iran to achieve one of its main regional objectives: removing the US military from its neighbor.

In an emergency session of the Iraqi parliament on Sunday, lawmakers voted in favor of a resolution asking the government to expel US troops from the country. The measure was passed with mostly Shiite factions voting in favor. Kurdish and most Sunni members of parliament did not attend the session, presumably because they oppose ending the US presence in the country.

"The government commits to revoke its request for assistance from the international coalition fighting 'Islamic State' due to the end of military operations in Iraq and the achievement of victory," the resolution read.

"The Iraqi government must work to end the presence of any foreign troops on Iraqi soil and prohibit them from using its land, airspace or water for any reason," it continued.

The resolution still needs to be approved by the Cabinet, but interim Prime Minister Adel Abdul-Mahdi voiced support as he railed against US violations of Iraqi sovereignty.

"Despite the internal and external difficulties that we might face, it remains best for Iraq on principle and practically," Abdul-Mahdi told parliament.

About 5,200 US troops are deployed at Iraqi military bases to train and support local security forces to prevent a resurgence of the "Islamic State" (IS). The troops are there at the invitation of the Iraqi government as part of an US-led international coalition against the extremist group.

Iran-backed Iraqi militia and US troops fought alongside each other during Iraq's 2014-2017 war against IS militants. But the extremist group's territorial defeat has opened new dynamics between adversaries Washington and Tehran at a time of escalating tensions, sparked when US President Donald Trump unilaterally withdrew from an international nuclear deal with Iran in 2018. 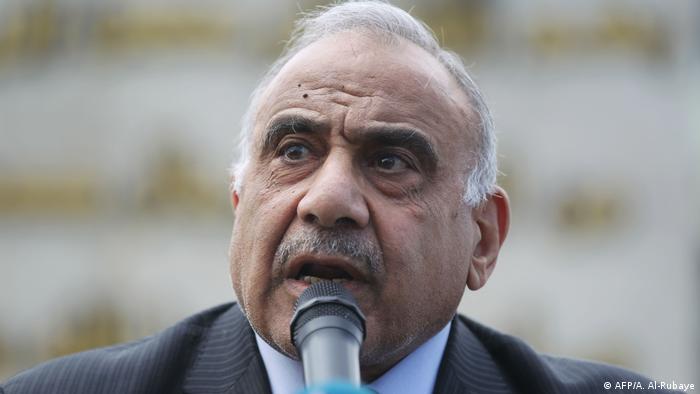 Abdul-Mahdi has accused the US of violating Iraqi sovereignty

Anger in Iraq at the United States has boiled over as Baghdad finds itself dragged into a geopolitical struggle between Washington and Tehran, two allies with which it has sought to balance relations.

Even before Friday's strike at Baghdad's International Airport on the convoy in which Soleimani was traveling, there was growing pressure from Iran's powerful Shiite militia and political allies for US troops to exit the country.

Those calls became louder after US airstrikes killed 25 militia fighters of the Iranian-backed Kataeb Hezbollah in late December. The strikes came in response to rocket attacks, blamed on the Kataeb Hezbollah, that killed a US defense contractor and wounded several US and Iraqi soldiers at the K1 military base near the northern Iraqi city of Kirkuk.

An organized mob of Shiite militiamen responded by storming the US Embassy in the heavily fortified Green Zone, as Iraqi security forces initially looked on. They left a day later, saying their message had been received and that the prime minister had provided assurance for a parliamentary vote on the US military presence. 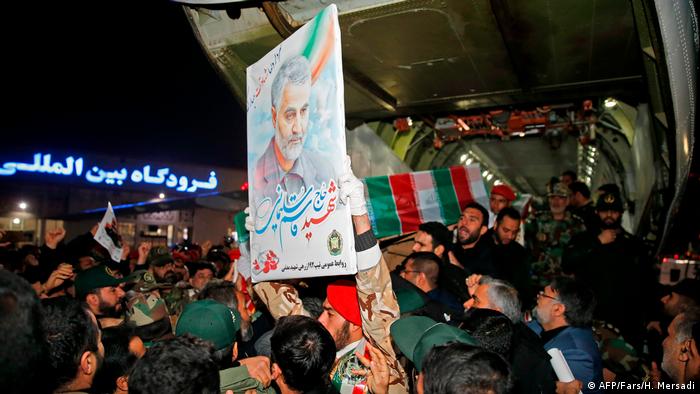 Abu Mahdi al-Muhandis, the leader of Kataeb Hezbollah and deputy head of Iraq's state-sanctioned Popular Mobilization Units, was among those vowing revenge in front of the US Embassy. He was joined by Qais al-Khazali, leader of the Iranian-backed Asaib Ahl al-Haq militia, and Hadi al-Amiri, the head of the powerful Badr Organization, who leads a bloc with the second-largest number of seats in parliament.

Muhandis was killed alongside Soleimani and eight others in the US drone strike on Friday.

From the Iraqi viewpoint, "the killing of Muhandis is more consequential than that of Soleimani, since he was one of the highest Iraqi security officials," Heiko Wimmen, the project director for Iraq, Syria and Lebanon at the International Crisis Group, told DW. 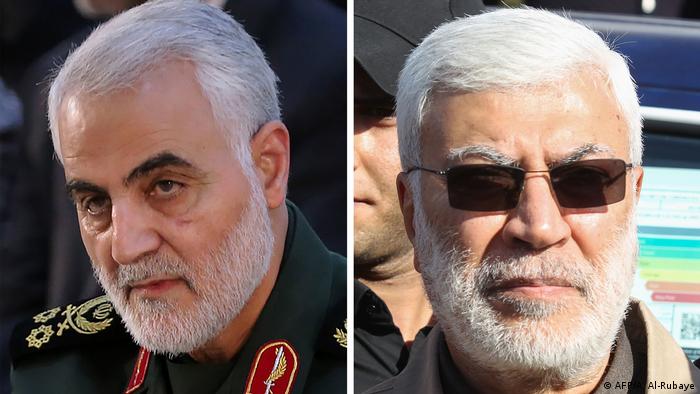 Soleimani and Muhandis were both leading military figures

Amiri and influential Shiite cleric Moqtada al-Sadr, who heads the largest bloc in parliament, buried their rivalry to unite behind Sunday's resolution. Both leaders and other militia leaders are threatening to use force to oust US troops from Iraq.

Sadr, a nationalist populist who rails against US and Iranian influence in the country, said Sunday that the action by parliament didn't go far enough and that the US Embassy should be shuttered.

"Finally, I call specifically on the Iraqi resistance groups and the groups outside Iraq more generally to meet immediately and announce the formation of the International Resistance Legions," he said, in apparent reference to Iran-backed groups across the region spreading from Syria and Lebanon to Yemen.

As Iran and its Iraqi Shiite allies vow to retaliate against the United States, strategically the easiest and least risky place for a first response is in Iraq, experts said.

"A far more effective response than unguided missiles on embassies and bases or tanker attacks would be a political response that forces an American withdrawal from Iraq," said Fanar Haddad, a senior research fellow at the Middle East Institute at the National University of Singapore.

"This would achieve a long-held Iranian objective and help consolidate Iran's control of Iraq. It is very likely that this crisis will serve to strengthen the position of Iran-leaning political actors even if it does not achieve the ultimate objective of forcing an American withdrawal," he said.

Read more: How Soleimani assassination was reported in Germany

Wimmen said the United States has invested a lot of money in Iraq and it was unlikely Washington will leave military bases so easily.

"I expect they will dispute the competence of the Iraqi parliament to take such a decision and try to draw this out," he said.

The push to expel the United States comes as Iraq is in the throes of a political crisis following nearly three months of deadly anti-government protests over corruption, poor services and Iranian influence.

The grassroots protest movement is calling for the wholesale uprooting of the post-2003 political system that serves narrow sectarian elites and their cronies. It already forced Abdul-Mahdi to resign as prime minister in late November, although he remains head of a caretaker government. The country has since been in political paralysis.

Some anti-government protesters cheered Soleimani's death on Friday, blaming him and pro-Iran militia of killing more than 450 protesters and wounding at least 20,000. US Secretary of State Mike Pompeo shared a video on Twitter describing Iraqis as "dancing in the street for freedom, thankful that General Soleimani is no more."

Yet in a show of force a day later, hundreds of thousands who were mourning the "martyrdom" of Soleimani and Muhandis shouted "Death to America" in Iraqi streets as the two bodies were moved through Baghdad and the Shiite holy cities of Najaf and Karbala. Iraq's top political and Shiite religious leaders joined in honoring Soleimani and Muhandis and condemning the US strikes.

The strikes have boosted pro-Iran Shiite factions in Iraq seeking to quash threats to their vested interests. Those factions have moved to capitalize on them to undermine the grassroots protest movement.

The assassination of Soleimani and Muhandis "is bad news for the protest movement," Haddad said.

"The assassinations in effect have created what opponents of the protest movement have been searching for since October: a countercause that can create counterprotests and counterpressure," he said.

Wimmen agreed: "It's hard to see how the protest movement can survive the nationalist rallying cry from the Shiite parties."

President Trump has blamed Iran for "orchestrating" an attack by Iraqi militiamen on the US embassy Baghdad. The incident threatens to escalate an already dangerous downward spiral. (31.12.2019)