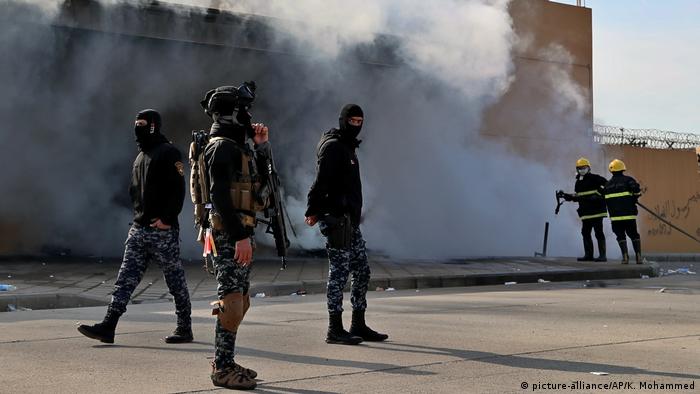 Paramilitary groups and their supporters protesting against US airstrikes in Iraq withdrew from Washington's embassy in Baghdad on Wednesday.

US security forces guarding the embassy in Baghdad had earlier fired tear gas at pro-Iranian protesters outside the building on Wednesday.

By early evening, most protesters appeared to have complied with a call by the Popular Mobilization Forces (PMF) — an umbrella group of mainly Shiite militia — to withdraw. The group said the demonstrators' "message has been heard."

Tensions have escalated dramatically after thousands of supporters of the Hashed al-Shaabi paramilitary force attempted to storm the US Embassy in Iraq the previous day.

A large group camped outside the building overnight, angry at US airstrikes that killed 25 pro-Iran fighters over the weekend. They set up about 50 tents and even portable bathrooms after marching unimpeded into the high-security Green Zone. On Tuesday, protesters set fire to part of the wall surrounding the US embassy

US Marines worked to disperse the crowd as more people turned up for the second day of action, some of whom lit a fire on the roof of the reception area.

In response to the tear gas, some members of the crowd hurled stones towards the embassy. Several protesters were reported injured.

Hashed al-Shaabi later released a statement calling on its supporters to withdraw from the embassy perimeter. Iraq's INA state news agency reported that protesters heeded the call and began to withdraw.

US President Donald Trump has blamed Iran for the mobbing of the embassy. The US has announced it will deploy an infantry battalion of about 750 soldiers to the region. Overnight, a rapid response team of Marines flew in to reinforce the embassy.

Trump threatened Iran — which it accuses of organizing the action — of retaliation if events escalated.

US Secretary of State Mike Pompeo said that the attack was "orchestrated by terrorists."

Later on Wednesday, Tehran summoned a Swiss Embassy official which represents US interests to complain about American "warmongering," according to Iran's foreign ministry.

"The Swiss charge d'affaires was summoned," said the Iranian Foreign Ministry. "The Islamic Republic of Iran conveyed its strong protest … over warmongering remarks made by American officials which are in violation of the United Nations charter."

On Sunday, the US military launched the aerial bombardment against the Kataib Hezbollah militia in response to the killing of a US civilian contractor in a rocket attack on Friday on an Iraqi military base.

He also warned Trump that his threats were meaningless.

"That guy has tweeted that we (the United States) see Iran responsible for the events in Baghdad & we will respond to Iran," Khamenei said.

"First, you can't do anything. Second, if you were logical — which you're not — you'd see that your crimes in Iraq, Afghanistan... have made nations hate you."