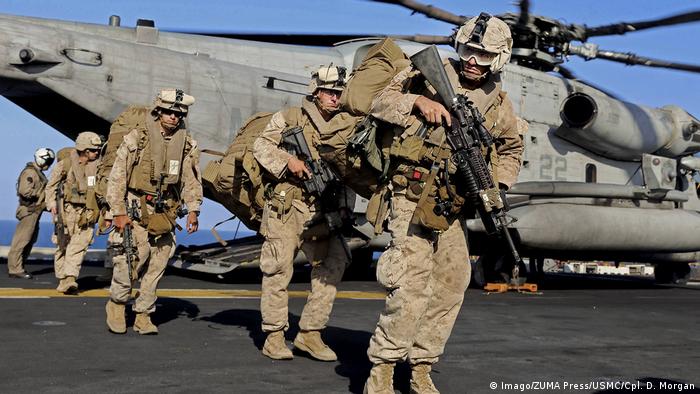 US Defense Secretary Mark Esper denied Monday that the White House was preparing to pull troops out of Iraq. The announcement came after a top US general in the country gave his Iraqi counterpart a letter saying American forces would be exiting the country over the next days and weeks.

The head of the US military's Task Force Iraq, Brigadier General William Seely, had sent the letter to Iraq's joint operation command, a copy of which was seen by multiple news outlets including Agence France-Presse and Reuters.

"Sir, in deference to the sovereignty of the Republic of Iraq, and as requested by the Iraqi Parliament and the Prime Minister, CJTF-OIR will be repositioning forces over the course of the coming days and weeks to prepare for onward movement," reads the letter.

The letter said US-led coalition forces against the "Islamic State" (IS) would take measures to ensure the "movement out of Iraq" is conducted safely and efficiently. It said there would be increased helicopter traffic in and around the Green Zone as part of the preparations.

'No decision whatsoever to leave Iraq'

But the Pentagon later denied it had any intention to withdraw US forces.

"I don't know what that letter is ... We're trying to find out where that's coming from, what that is. But there's been no decision made to leave Iraq. Period."

Pentagon Joint Chiefs Chairman Mark Milley said the letter was "genuine" but not intended to be sent at this time.

"This was a mistake from McKenzie," Milley told reporters, referring to US Central Command commander General Frank McKenzie. "It shouldn't have been sent."

On Sunday, the Iraqi parliament voted on a resolution to ask 5,200 American troops to leave the country. It still needs to be approved by the government, which is currently headed by caretaker officials, including interim Prime Minister Adel Abdul-Mahdi, who had stepped down due to mass anti-government protests. He, however, supports the resolution.

German Foreign Minister Heiko Maas said earlier Monday that neither Germany nor any other country involved in the anti-IS coalition would remain in Iraq without Baghdad's approval.

The Bundeswehr is set to "temporarily" transfer German soldiers out of Iraq, according to a letter provided to the Defense and Foreign Ministries and seen by German broadcaster ARD. They are likely to be transferred to nearby Jordan and Kuwait, as Berlin waits to see how tensions play out between the US and Iran.

On Monday, Abdul-Mahdi met with US Ambassador Matthew Tueller, telling him that the two countries needed "to work together to execute the withdrawal of foreign troops from Iraq.''

President Donald Trump was angry over the Iraqi parliament vote and threatened sanctions if the government expelled US troops. He also said the US wouldn't leave without being reimbursed for military investments made in Iraq.

US forces withdrew from Iraq in 2011, only to return in 2014 at the invitation of the government to help battle IS. The terrorist group was defeated in 2017 in Iraq, but it still carries out hit-and-run attacks in the west and north of the country.