Germany split on path forward in US-Iran conflict | Germany | News and in-depth reporting from Berlin and beyond | DW | 06.01.2020 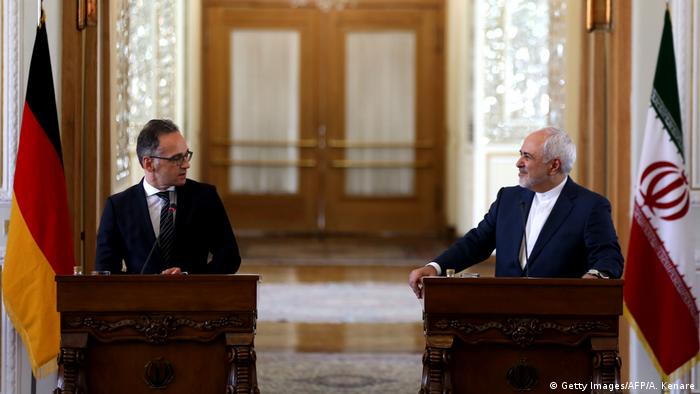 Germany is split over its strategy in the US-Iran conflict as tensions escalate at breakneck speed in the days following the killing of top Iranian military commander Qassem Soleimani.

Picking sides or diplomatic inaction risk further alienating the United States and Iran, both of whom are already critical of German and European responses to the conflict, analysts say. The challenge will be preserving Germany's trademark multilateralism amid conflicting domestic interests and pressure from abroad.

"Choosing sides will only harden the stances of the US and/or Iran and weaken the EU's mediation position in the long-term," Gert Hilgers, a doctoral researcher in international politics at the University of Warwick in the United Kingdom, told DW. "For Berlin, this is not a matter of ambivalence or the avoidance of making hard decisions, but a matter of sticking to its foreign policy roots."

Since the days of Ostpolitik, a rapprochement strategy with communist East Germany before German reunification in 1990, Germany has practiced close diplomacy with hostile international actors to avoid conflict.

That ethos was the undercurrent of the 2015 nuclear deal with Iran, which promised to lift crippling economic sanctions on Tehran in exchange for it dismantling its nuclear program. Even after President Donald Trump withdrew the United States from the agreement in May 2018, European signatories, most notably Germany and France, continued to explore ways to keep the deal afloat.

That essence of German diplomacy is now being tested in the wake of Friday's US drone strike in Iraq. The attack killed Soleimani, the architect of Iran's regional power strategy, as well as several Iraqi militia leaders.

Iran has already announced it would ignore the uranium enrichment caps outlined in the nuclear deal and promised revenge against the US and its regional partners as hundreds of thousands of Iranian mourners took to the streets.

Meanwhile, the Iraqi Parliament passed a resolution calling on all foreign troops to leave the country, including the US-led international coalition against the "Islamic State," which has been based in the country since 2015.

Read more: Will Iran target oil to retaliate against US?

In response, German Foreign Minister Heiko Maas on Sunday called for a planned meeting of his EU counterparts this month in Brussels to be moved up to this week to discuss the quickly developing conflict.

"Europe is now playing an important role," he said in a statement. "As Europeans, we have proven and reliable channels of communication on all sides, which we have to make full use of in this situation."

German and European heads of state echoed the sentiment. German Chancellor Angela Merkel, together with French President Emmanuel Macron and UK Prime Minister Boris Johnson, said in a joint statement on Monday that the nations "stand ready to continue our engagement with all sides in order to contribute to defuse tensions and restore stability to the region."

"There is now an urgent need for de-escalation," the statement added, while calling on the continuation of the coalition against "Islamic State" and Iran's continued adherence to the nuclear deal. "We call on all parties to exercise utmost restraint and responsibility."

But German and European responses have satisfied neither side of the conflict. Tehran already summoned Germany's top diplomat in the country over the weekend for "destructive comments" made about Iran's provocation of the strike that killed Soleimani. Meanwhile, US Secretary of State Mike Pompeo told Fox News that the Europeans have not been "helpful" in the situation.

"The Brits, the French, the Germans all need to understand that what we did, what the Americans did, saved lives in Europe as well," he said.

On the home front, the German government is also under pressure. Following the Iraqi parliament's resolution to expel foreign fighters, including some 130 German troops, the environmentalist Green Party, Germany's second-strongest political party in the polls behind Chancellor Merkel's conservative Christian Democrats, called on the German government to "immediately end" its deployment in Iraq.

The US-led coalition in Iraq and Syria halted its counterterrorism campaign on Sunday to brace for an uptick in violence against military outposts, The New York Times reported.

"Since the security situation has deteriorated dramatically and the current political environment no longer allows real security sector reform, the legal basis for the operation is now gone," Omid Nouripour, the Greens' foreign policy expert in German parliament, said in a statement.

By all means necessary

Under pressure with no hope of detente in sight, it is more important than ever that Germany and Europe mediate the conflict by all means necessary, Cornelius Adebar, an analyst on Iran and the European Union with the German Council on Foreign Relations, told DW.

"Another war in the Middle East has direct consequences for Europe's security — besides the human cost borne by the region itself — which is why Germany, France, and the United Kingdom along with all other EU member states should come up with a unified position," he said.

That requires Germany mustering as much of the "Ostpolitik spirit" as it can under the difficult circumstances of a divided nation and a polarized Europe caught between feuding geopolitical partners, said Hilgers.

"To protect its own interests, the EU must continue its path of championing de-escalation and multilateralism — however difficult this may seem after the recent events," he said.