Egon Bahr, known as one of the architects behind West Germany's "Ostpolitik," has died aged 93. His work was essential for the rapprochement between East and West Germany and Eastern Europe starting in 1969.

Social Democrat Bahr, who was born in the eastern state of Thuringia in 1922 and later lived in Bonn and Berlin, was instrumental in West Germany's efforts to improve ties with the Soviet Union, East Germany and other Warsaw Pact States, which were virtually non-existent in the late 1960s.

While West Germany's first chancellor, Christian Democrat Konrad Adenauer, had focused solely on strengthening ties with the US and other western nations after World War II, the mood was shifting in 1969, when Social Democrat and former foreign minister Willy Brandt became chancellor. 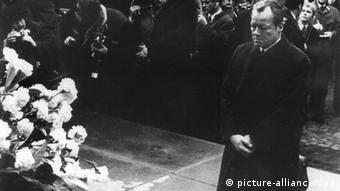 Egon Bahr, officially deputy minister in the chancellery, was Brandt's chief negotiator for a series of contracts, the most important of which were with the Soviet Union (Treaty of Moscow), Poland (Treaty of Warsaw) and East Germany (Basic Treaty of 1972).

Bahr's and Brandt's eastern policy - called Ostpolitik in German - was based on the realization that East Germany could no longer be ignored and that ties needed to be improved. Their approach became known as "change through rapprochement" ("Wandel durch Annäherung") - an expression coined by Bahr.

In the Basic Treaty, East and West Germany officially recognized each other as sovereign states for the first time. Despite that, West Germany was still working towards its ultimate goal of reunification.

Social Democrat party chief Sigmar Gabriel reacted to the news of his death by telling German daily "Bild" that "Bahr was a great trailblazer for Social Democrats," who "implemented concepts with a unique political energy.

After Brandt resigned as chancellor in 1974, Bahr served in successor Helmut Schmidt's cabinet for two years. After leaving the cabinet, Bahr continued to be a member of the Bundestag, the German parliament.

Foreign policy remained his passion. As late as the end of July, he traveled to Moscow to meet ex-Russian President Mikhail Gorbachev to promote closer ties between Russia and Germany, which have deteriorated since the start of the crisis in Ukraine.

Germany's tradition of Ostpolitik seems to make it an ideal mediator in the Crimean crisis, but Berlin has grown disillusioned with the concept. And domestically Germans have a very different view of Putin's annexation. (27.03.2014)

Germany has marked what would have been the 100th birthday of its first post-war Social Democratic chancellor Willy Brandt. At a Berlin ceremony, current SPD head Sigmar Gabriel described Brandt as a political "giant." (18.12.2013)