The three countries urged all parties to exercise restraint in a bid to end a cycle of violence. Germany's foreign minister says Europe will this week respond to Iran's pledge not to abide by the 2015 nuclear deal. 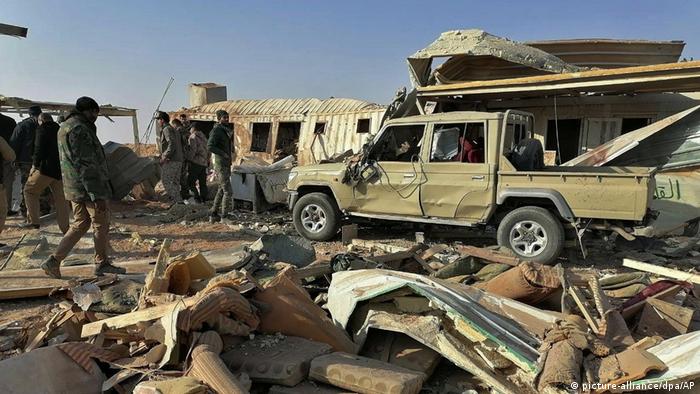 The three leaders issued a joint statement saying there was "an urgent need for de-escalation" and that the "current cycle of violence in Iraq must end."

The trio reiterated their "attachment to the sovereignty and security of Iraq," saying that "another crisis risks jeopardizing years of efforts to stabilize Iraq."

Fighting against Islamic State in the region "remains a high priority," the statement added. The leaders urged Iraqi authorities to continue providing support to the US-led alliance fighting the militant group after Iraq voted to expel foreign troops linked to coalition forces fighting IS.

Top EU diplomat Josep Borell tweeted on Monday that the EU "deeply regrets" Iran's announcement that they will no longer abide by the terms of the nuclear deal.

The joint statement from the UK, Germany and France came as German Foreign Minister, Heiko Maas on Monday morning branded US threats of sanctions against Iraq in response to voting to oust US troops as "not very helpful."

"I don't think it works to convince Iraq with threats but with arguments," said Maas, talking to Germany's Deutschlandfunk public radio.

Number of US troops in Middle East

In their Sunday statement, the European leaders also responded to Iran's announcement that it would no longer stick to the limits set out in the 2015 nuclear deal (JCPOA).

The statement called on Iran to refrain from any violence or nuclear activities and to reverse any measures that do not comply with the terms of the nuclear agreement.

Officials from Germany, Britain and France will meet to discuss the Iran nuclear deal on Monday, Maas told Deutschlandfunk, saying it could "not simply be shrugged off." The three countries would react later in the week to Tehran's announcements.

Merkel, Johnson and Macron made reference to the latest rocket attack on coalition troops stationed in Iraq, saying "we are deeply concerned about the negative role that Iran has played in the region, in particular with the Iranian Revolutionary Guard and the al-Quds unit under command of General Soleimani."

"Iran's announcement is clearly extremely concerning," a spokesman for UK Prime Minister Johnson said later. "It is in everyone's interests that the deal remains in place. It makes the world safer by taking the prospect of a nuclear-armed Iran firmly off the table."

"We have always said the nuclear deal is a reciprocal deal, and in light of Iran's announcement we are urgently speaking to partners about next steps," the UK spokesman added.

Heiko Maas said on Sunday that he proposed bringing forward a regular meeting with counterparts from other European Union countries to the coming week amid the current, fast-developing situation.

The foreign minister also called on the EU to use its reliable channels of communication with all sides "to the full extent."

"Europe now has an important role in view of the threatening escalation of the conflict between the United States and Iran'' and that EU foreign ministers should "quickly agree on a common approach," said Maas.

Germany will reach out to Iraq to clarify relations following a parliamentary vote to expel foreign troops, he said, adding that "we will respect every decision." Germany has about 130 soldiers in Iraq as part of an international assistance and training mission.

Like Merkel, Macron and Johnson, Germany's foreign minister also called for the focus to remain on the fight against IS in the region, saying that the group remained a "serious threat."

The country's top police institution fears Israeli and US facilities could be targeted by terrorists following the assassination of Iranian General Qassem Soleimani. Many German states are already on high alert. (04.01.2020)

The EU has "failed to act on their promises" within the 2015 nuclear deal, said Iran's atomic energy chief. Germany's foreign minister has warned against escalation of the dispute, saying "everyone must act responsibly." (09.09.2019)