The German military will end its anti-"Islamic State" military mission in six months. The issue has divided the CDU-SPD coalition in Berlin. 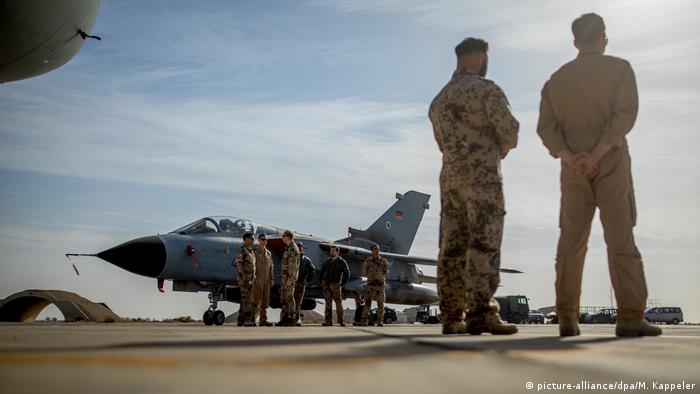 The German parliament on Thursday voted to end the Bundeswehr's anti-"Islamic State" (IS) mission in Syria and Iraq after March 31, 2020.

The Christian Democrats (CDU) and Social Democrats (SPD) have been in a tussle over extending the mission's mandate, with the SPD demanding the German military end its role in the international coalition.

The mandate was set to expire at the end of October and would normally have been extended by a year.

Germany has four Tornado reconnaissance jets, an AWAC aircraft and an in-flight refueling tanker based in Jordan carrying out missions as part of a US-led international coalition.

Lawmakers also voted to extend the Bundeswehr's military training mission in Iraq for one year.

The decision to end Germany's participation the anti-IS mission comes as Defense Minister Annegret Kramp-Karrenbauer has suggested the creation of an international security zone in northeast Syria.

The United States has urged Germany to continue its participation in the anti-IS mission.

Germany's military has long struggled with a shortage of functioning equipment. At the Laage Air Base near Rostock, however, it's not the planes that are hard to come by, but the pilots, as DW's Volker Witting reports. (04.09.2019)

Jens Stoltenberg has warned that NATO must continue its fight against IS after the US withdrawal from Syria. He welcomed Germany's call for an international presence in Syria as a possible political solution. (23.10.2019)