As Russian troops are deployed to northern Syria, Germany has reasserted the need for an internationally run safe zone in the area. NATO is set to discuss the proposal at a high-level summit Thursday. 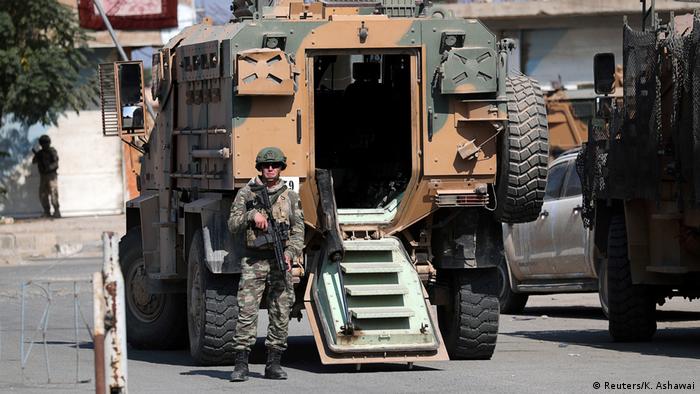 Germany has criticized a deal between Russia and Turkey to remove Kurdish fighters from land near the Turkish-Syrian border, ahead of a high-level meeting of North Atlantic Treaty Organization (NATO) members.

Instead, Berlin reasserted the need for an international response — as suggested by German Defense Minister Annegret Kramp-Karrenbauer.

"It is important that international action to resolve this crisis is not limited to Turkey and Russia," Chancellor Angela Merkel's spokesman Steffen Seibert told reporters.

"Europe must deal with current events taking place at the border of our continent because these are issues that directly affect several EU member states."

Kramp-Karrenbauer is expected to promote the idea at a two-day meeting of NATO defense ministers starting on Thursday in Brussels.

In response to a DW question, NATO Secretary General Jens Stoltenberg said he welcomed the idea as one possible political solution in northeastern Syria.

"We need the political solution and therefore also welcome proposals from NATO Allies on how we can try to move forward. This will certainly be addressed, discussed during our meeting."

Kramp-Karrenbauer, touted as a possible successor to Merkel as chancellor, had suggested that international forces be used to create the security zone in northern Syria, where Turkey is engaged in an operation against Kurdish fighters.

Kramp-Karrenbauer floated the idea — which was met with mixed responses — in an interview with DW on Monday.  She expanded on the suggestion on Wednesday, saying the zone should be guarded by United Nations troops rather than a loose alignment of nations including Germany, and that this would need a UN mandate.

US Ambassador to NATO Kay Bailey Hutchison told DW on Wednesday that Washington was pleased that Germany had floated an idea that could form the basis for a debate.

The Kremlin on Wednesday said it did not see the need for an internationally administered security zone in northern Syria, after the extension of a ceasefire in the area.

Russians and Syrians move in

Russia is set to work with Syria to ensure that Kurdish YPG forces retreat from parts of northern Syria less than 30 kilometers from the Turkish border. Moscow has warned that, if the Kurds do not pull out, it will withdraw and allow the Turkish military to resume its offensive.

Russia and Turkey struck a deal on the proposed safe zone on Tuesday, agreeing that Syrian and Russian forces would see Kurdish fighters and their weapons cleared from the zone.

Moscow and Ankara agreed that after six days, Russian, Russian and Turkish forces will patrol a 10-kilometer wide area along the length of the frontier.

The agreement expanded on a US-brokered ceasefire that had been set to expire late on Wednesday.

Read more: Trump on Turkey-Syria conflict: 'It's not our border'

US President Donald Trump lifted sanctions against Turkey, imposed in light of Ankara's ongoing offensive, on Wednesday. Trump declared that the ceasefire was now "permanent."

"Let someone else fight over this long blood-stained sand," Trump said in a White House speech.

US forces began a withdrawal from the border area, where it was conducting joint patrols with the Kurdish fighters who liberated much of the country from "Islamic State" (IS) militants, earlier this month. The withdrawal paved the way for Turkey to launch its offensive against the YPG, which it claims represents a terrorist threat on its southern flank.