Jens Stoltenberg has warned that NATO must continue its fight against IS after the US withdrawal from Syria. He welcomed Germany's call for an international presence in Syria as a possible political solution. 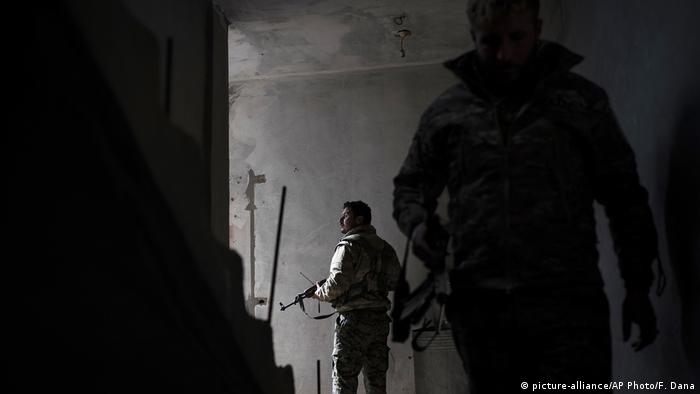 NATO Secretary General Jens Stoltenberg warned on Wednesday that "Islamic State" could revive itself following the US withdrawal in Syria.

In a press conference setting the agenda for an upcoming, high-level NATO meeting, Stoltenberg said the fight against IS must continue.

"Ending IS was the reason NATO went in (to northeastern Syria). We have to preserve those gains," he said. "We also have to understand that the fight against IS is not over; they can come back."

Stoltenberg said NATO would continue to support the fight against IS in both Iraq and Afghanistan, especially through the training of local forces.

Stoltenberg repeatedly called for a political solution to the conflict between Turkey and the Syrian Kurds, addressing agreements between the US, Turkey and Russia. He said he:

What is the German proposition for Syria? German Defense Minister Annegret Kramp-Karrenbauer, in comments to DW on Monday, called for international troops to create a "safe zone" in northeastern Syria to help resume the fight against "Islamic State," stablize the region, and rebuild civilian life. The announcement took some NATO allies by suprise, although Kramp-Karrenbauer insisted she had discussed her proposal with her French and American counterparts.

NATO defense ministers will meet for two days in Brussels, starting Thursday. A range of other issues on the table include:

One of the issues to be discussed at the defense ministers' meeting will be the resilience of telecommunications infrastructure of NATO member states, Stoltenberg said.

Without naming China or Huawei by name, he said the protection of 5G infrastructure was important for both civilian and military life. "Allies should conduct a thorough assessment of the risks to communications systems associated with cyber threats, as well as the consequences of foreign ownership, control or direct investment."

Stoltenberg pledged that the Taliban would never find victory through conflict in Afghanistan and that a political solution was their only option.

"The Taliban has to understand that they will never win on the battlefield. They have to sit down."

He defended the heavy presence of NATO forces in the country, saying "a strong military presence is the best way to provide the framework for a political solution."

Stoltenberg called on NATO allies to provide more support to Ukraine and reiterated NATO opposition to Russia's annexation of Crimea.

He said it would be addressed at the defense ministers meeting, but that they would further support Ukraine, particularly its naval capabilities, at an upcoming meeting in Odessa.

Ukrainian President Volodymyr Zelenskiy has criticized European partners for failing to provide adequate support for its fight against Russia.