Donald Trump has said that Turkey's military campaign against Syrian Kurds is not Washington's problem. However, he has imposed economic sanctions against Ankara and sent VP Mike Pence to Turkey to discuss the offensive. 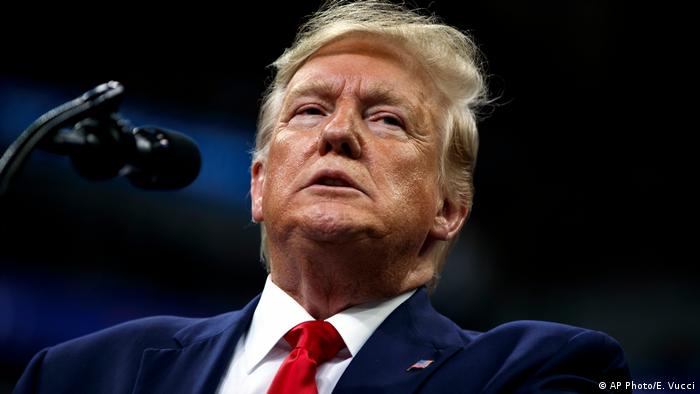 US President Donald Trump said on Wednesday that Turkey's incursion into Syria was not a US problem, saying that his country is "not a policing agent." He also denied giving Turkey a "green light" to invade Syria.

"They have a problem at the border; it's not our border," Trump said.

Last week, Trump made good on earlier promises to completely pull US troops from Syria by announcing the unexpected withdrawal of the American military from northeastern Syria, effectively abandoning the Kurdish allies that proved instrumental in major military gains made against "Islamic State" (IS) terrorists.

Nevertheless, Trump said, the Kurds "aren't angels," in stark contrast to a few days ago, when he called them "wonderful people."

Trump's move opened the door for Turkish President Recep Tayyip Erdogan to launch an offensive against Syrian Kurds. Despite this, Trump on Friday denied having approved such a move in any way.

"I didn't give him a green light. Just the opposite of a green light," Trump said, before acknowledging, however, that "Erdogan's decision didn't surprise me, because he's been wanting to do that for a long time."

In a letter to Erdogan dated October 9, Trump told the Turkish leader "don't be a tough guy" and that the US and Turkey could "work out a good deal" that avoided adding fuel to the war in Syria.

The letter, reported on by Fox News and whose authenticity was confirmed by the White House on Wednesday, called on Erdogan to make a deal with Syrian Kurds and added, "History will look upon you favorably if you get this done the right and humane way. It will look upon you forever as the devil if good things don't happen."

The US has already implemented economic sanctions against several high-ranking Turkish officials and government ministers in a bid to stop the incursion. Ankara has said it will announce retaliatory sanctions soon.

US Vice President Mike Pence and Secretary of State Mike Pompeo were en route to Turkey on Wednesday evening to hold talks with officials about the conflict. Erdogan initially refused to meet them,  saying he would only speak to Trump, before backtracking.

Turkey has long sought a military campaign against the Kurds, having fought an insurgency by groups of armed Turkish Kurds on and off for decades, with that operation often spilling into neighboring Iraq or Syria.

The offensive has so far killed at least dozens of civilians and forced 160,000 people to flee their homes, according to the UN.

Trump's comments came during a visit to Washington from Italian President Sergio Mattarella, who used the opportunity to condemn Turkey's incursion.

US Vice President Mike Pence is traveling to Ankara to persuade President Recep Tayyip Erdogan to halt his military offensive in northeastern Syria. But Turkey has rejected calls for a truce. (16.10.2019)

Syria's civil war erupted out of the Arab Spring protests that swept much of the Middle East and North Africa in 2011. The conflict has since drawn in multiple warring factions from around the world. (28.12.2018)