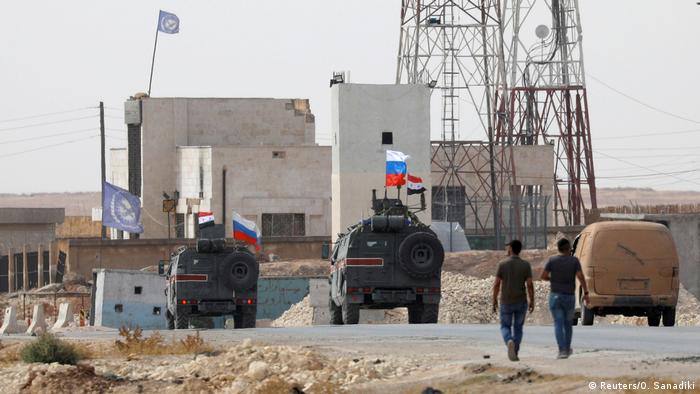 Russia-backed Syrian government troops on Tuesday advanced into Manbij, a key strategic city west of the Euphrates River near the Turkish border that has been hotly contested by Turkish and Kurdish fighters.

The advance comes hours after Manbij was abandoned by withdrawing US forces, with Russia moving troops in in their stead to play an intermediary role in keeping apart advancing Syrian government forces and Turkish troops.

Turkey had been aiming to capture the city from Kurdish control and had amassed troops for a planned assault. Ankara has faced staunch criticism from European partners and from the US, which imposed sanctions and threatened more to follow late on Monday.

Russian state media cited the Russian Defense Ministry, which said the Syrian army had "full control" over Manbij, located some 30 kilometers (19 miles), from the Turkish border. The Kremlin's Syria envoy said the Kurds had allowed Syrian forces to enter Manbij.

There were also reports of Syrian troops manning joint checkpoints with Kurdish militia and vehicles riding through the center of the city waving Syrian and Russian flags.

Russia fills the US void

On Sunday, Damascus deployed its troops to northern Syria after Kurdish forces struck a deal with the Russia-backed government of Syrian President Assad to contain the Turkish advance. Russia is the main military backer of the Syrian state.

"No one is interested" in fighting between Syrian government troops and Turkish forces, Alexander Lavrentyev, Moscow's envoy for Syria told Russian state media, adding Russia was "not going to allow it."

US troops had outposts in Manbij as part of the Western mission against the self-styled "Islamic State" in Iraq and Syria. In both countries, the local Kurdish populations repeatedly proved themselves the most effective ground fighters against IS, with NATO powers committing only to aerial and intelligence engagement in the region. In 2017, US forces helped prevent a battle in the city between Turkish and Kurdish fighters.

In the interim, Manbij has served as a de facto buffer zone between Syrian government troops to the south and Turkey-backed Sunni rebels to the north.

A US military spokesman said Tuesday afternoon that contacts had been kept open with the Turkish and Russian forces to ensure that several hundred US troops could leave Manbij safely.

Erdogan not worried about Manbij

Meanwhile, Turkey has vowed to press its military operation in northern Syria, despite US sanctions. "They say 'declare a ceasefire'. We will never declare a ceasefire," Turkish President Tayyip Erdogan warned.

"They are pressuring us to stop the operation. They are announcing sanctions. Our goal is clear. We are not worried about any sanctions," he added.

Erdogan was not bothered about the Syrian and Russian troops entry into Manbij. "The regime entering Manbij is not very negative for me. Why? It's their lands after all. But, what is important to me is that the terrorist organization does not remain there," Erdogan said, referring to the YPG.