By pulling out of Syria, the US has betrayed its closest ally in the fight against the "Islamic State." It may turn out to be a grave mistake with serious security consequences for Europe, says Matthias von Hein. 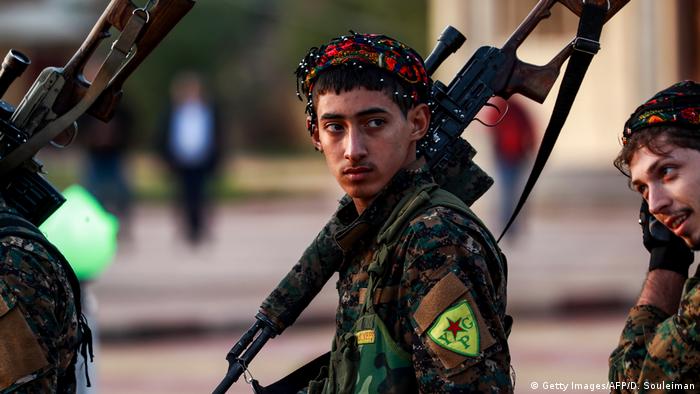 The latest news from Washington would seem to confirm the old Kurdish proverb: "No friends but the mountains." On Sunday evening, the US announced it would no longer stand in the way of a Turkish incursion into Kurdish-controlled areas in northern Syria, which Turkish President Recep Tayyip Erdogan had announced the day before.

Thus, the US has abandoned its closest ally in the fight against the so-called "Islamic State" (IS), leaving Kurds at the mercy of Erdogan's overpowering military.

More than 10,000 Kurdish fighters have been killed battling IS over the past several years. Kurdish militia fighters have been the backbone of the Syrian Democratic Forces (SDF), which did the lion's share of fighting IS on the ground in Syria. Now, it is painfully clear: The Kurds were blinded by the hope that their effort would earn them US protection against a Turkish attack.

Is the 'safe zone' safe?

The Turkish president has been eyeing northern Syria for quite some time. Recently, Erdogan presented his plan for a 30-mile-wide (48-kilometer-wide) Syrian "safe zone" south of the Turkish border during the United Nations (UN) General Assembly in New York. At 500 kilometers in length, that would make the area roughly the size of the US state of New Jersey.

To date, Kurdish-controlled areas were like oases of stability in war-torn Syria. But that will very likely change when the Turkish incursion begins. To get an idea of what the pending operation may bring, one need only look back to another operation that took place in early 2018. Cynically named "Operation Olive Branch," it saw Turkish forces marching into the city of Afrin alongside jihadist militias. The UN estimates that the operation forced some 140,000 people to flee Afrin and the surrounding area.

Read more: What you need to know — Turkey's offensive against Kurdish-held Afrin

The Syrian Observatory for Human Rights (SOHR), an information office opposed to the Syrian government, has said that far more people were forced to flee. The group claims that as many as 350,000 people were displaced. Human rights organizations decried the systematic destruction of livelihoods, in which Kurdish houses were plundered and, ultimately, Syrian Arabs were settled in the area.

Now Erdogan is openly plotting a similar course. He claims he wants to create space for more than three million Syrian refugees who are no longer welcome in Turkey. In the end, that means Erdogan is planning ethnic cleansing to enable the relocation of refugees along the Turkish-Syrian border.

Who will deal with the remnants of IS?

Despite all of that, one must not forget that the fight against IS is far from over. True, the terror group lost all of its territory at the beginning of the year, but IS fighters are still hiding out across Syria. And the group's ideology remains alive in the minds of the 12,000 IS fighters currently being guarded by the Kurds in northern Syria, as well as 70,000 IS adherents in refugee camps in the area.

When the Turks invade, Kurds will have a more pressing task than keeping an eye on the human remnants of the terrorist "caliphate." US President Donald Trump may claim that Erdogan and Turkey are now responsible for IS prisoners and adherents, but a Turkish incursion into northern Syria certainly won't make the world a safer place.

Russia says it has 'right to defend its security,' as Biden warns of sanctions 19m ago

Opinion: At last, a government that wants to govern 2h ago