The US is apparently annoyed about Turkey’s planned offensive in northeastern Syria. But in reality, Presidents Erdogan and Trump are playing the same game — and human beings will lose, says Miodrag Soric. 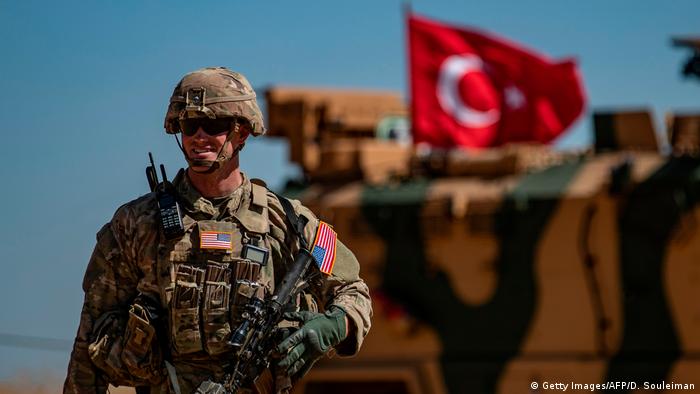 US President Donald Trump never made a big secret out of his plans to withdraw US soldiers stationed abroad. Now, the White House has announced it will withdraw most of its forces from northern Syria. But by doing so, the US is abandoning its Kurdish allies, with whom it fought against the so-called Islamic State (IS). Many will criticize this as a cynical move and manifestation of realpolitik. But Trump will retort that he is merely doing what US voters, who are tired of war, want. They see that hardly any progress is being made in the Middle Eastern conflict zones. And will be glad to see US forces extricated and other nations take control.

The winds have changed in Turkey

Turkey is now poised to invade northern Syria — in part because Turkish President Recep Tayyip Erdogan has been under domestic pressure for two months. His party suffered substantial losses in recent local elections, partly because his political rivals promised to address the issue of nearly 4 million Syrian refugees having fled to Turkey since the outbreak of the Syrian conflict in 2011. By now, many of them have settled into life in Turkey, with their children attending Turkish schools and families making use of medical and social services. Indeed, Turkey is doing great work when it comes to these refugees. But in recent times, the political winds have changed. Hundreds of thousands of Syrians in the labor force have crowded out Turkish workers. So now that Turkey finds itself in economic trouble, this is causing tensions — and some politicians are hoping to capitalize on this mood by demanding Syrians be swiftly repatriated.

Erdogan is among them. To him, the announced US troop drawdown is more than welcome. Now, Erdogan has free reign to create "safe zones" in northern Syria where he can then deport Syrian refugees. At the same time, Erdogan wants his forces to engage the Kurdish People's Protection Units (YPG) which currently control the area. Turkey's invasion will boost its geopolitical influence in the wider region. And if someday there are talks on what postwar Syria should look like, Turkey will have an important say in the matter — alongside Russia and Iran.

But this realpolitik, as practiced by Trump and Erdogan, is hurting those who are most vulnerable: the Syrian refugees. What are they to do when they are brought back to war-torn Syria? Besides, to some, the country's north has never been home in the first place. How are they supposed to live in cities and towns wrecked by fighting, that have no functioning infrastructure, let alone jobs to offer? And how will they be repatriated? By force, against their will? If this is what Erdogan plans then we will soon witness yet another tragedy in the Middle East.

Many actors are to blame for the suffering of these people. Among them authoritarian leaders like Syria's President Bashar Assad, Russian President Vladimir Putin and Iran's Hassan Rouhani. But also European states like Poland and Hungary, who refuse to take in refugees and look the other away when people endure hardship.

Last but not least, European leaders paying Erdogan billions to keep asylum-seekers from getting to central Europe are just as much to blame. For them, it is cheaper to pay off the Turkish president than to integrate hundreds of thousands of Syrians into their wealthy societies. It is, in other words, a political deal. And a manifestation of power politics and realpolitik — where morals don't matter.

Opinion: Football is a populist pandemic punching bag 21h ago