After a deadly fire underlined the dire conditions faced by refugees in Greek refugee camps, the continuing stream of arrivals is alarming EU authorities. What can Europe and Turkey do to find a solution? 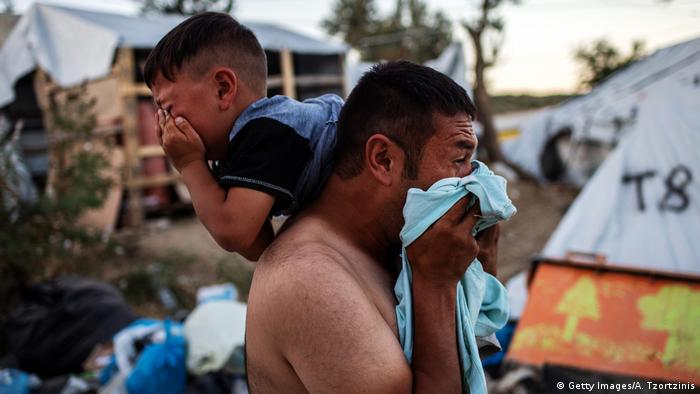 German Interior Minister Horst Seehofer's visit to Turkey and Greece comes as the situation in refugee camps worsens and the number of migrants trying to cross over to Europe increases.

A deadly fire at the overcrowded Moria camp on the Greek island of Lesbos on Sunday reminded European leaders of the horrific conditions refugees face there. The facility was designed to accommodate 3,000 people but currently hosts about 12,000.

Seehofer, who is accompanied by the EU Migration Commissioner Dimitris Avramopoulos, said ahead of Thursday's trip to Ankara that he wanted to offer Germany's assistance to both countries. Helmut Teichman, a senior official at the interior ministry, said a range of measures had been put together aimed at preparing the biggest refugee camps for winter.

Speeding up the process

Director of the European Stability Initiative and "architect" of the EU-Turkey Statement, Gerald Knaus, says the tragedy in Lesbos was predictable. He argues that "quick decision making" is key to solving the humanitarian crisis in Greece.

"If people are kept waiting for months in a place that has no provisions, no doctors, no psycho-social support, not even enough space for people to be secure and safe and treated humanely, tragedies like this will continue to happen and the whole EU-Turkey Statement is at risk," warned Knaus.

German opposition politician Heike Hänsel of the Left Party, who often travels to the Greek islands, described the current approach as "an isolation policy," adding that "the refugees are living there under inhumane conditions and we need a new and unified migration policy within the European Union." Hänsel said that Greece needed support from other EU members.

Migration expert Knaus agrees. "Last year, Greece had the highest per capita number of asylum applications in the European Union after Cyprus and it has a backlog of two years of decisions to make," he said.

On Monday, the Greek government announced that it would tighten its sea and land borders, shorten the asylum process and deport 10,000 people who do not qualify for protection by the end of next year. Greek migration minister Giorgos Koumoutsakos said the country was currently handling about 75,000 asylum claims.

Knaus called on those European countries with "the most effective asylum services" to hold discussions with the Greek authorities and "work out a plan and what resources are needed." He said that that is what Seehofer should aim for during his visit to Greece this week.

Greece lacks the resources to speed up the application process, such as caseworkers, interpreters and appeals panels. Partly as a result of these shortages, only 2,505 people have been sent back to Turkey from Greece since the deal was made. Meanwhile, 24,492 Syrians who arrived in the EU via Turkey have been settled in member states.

The problem is being compounded by growing numbers of migrants coming from Turkey. In September, more than 10,000 people, mostly Afghan and Syrian families, crossed the Aegean Sea from Turkey to Greece. According to the UNHCR, this is the highest monthly level in more than three years.

The main goal of the 2016 EU-Turkey deal was to prevent migrants from attempting the potentially fatal crossing from Turkey and to curtail human trafficking. Although the deal worked for a while after it was struck, the recent increase in the number of refugees coming to the Greek islands and renewed threats by Turkish President Recep Tayyip Erdogan to "open the gates" are of concern to EU member states, especially Greece.

Knaus said Seehofer should use his visit to Turkey to "create an ombudsperson" who could credibly reassure Greek asylum case workers that the families they send back to Turkey "will in fact be safe" and "that we can verify this." For this to function, he said, cooperation between Turkey and the EU was crucial.

Read more: 2019 one of worst years on record for displaced persons

Turkey hosts more than 3.5 million refugees, more than any other country in the world. It has so far spent €36.7 billion ($40 billion) on dealing with the refugee crisis. The EU committed €6 billion ($6.5 billion) to help Turkey.

Turkey accuses the EU of making late payments, while the EU alleges that Turkey is not sticking to its end of the deal and loosening security controls on migration routes.

Nevertheless, both sides need each other. The refugee crisis is too big for a single country to cope with on its own — a reality that has led European leaders to signal that financial aid to Turkey could continue beyond the 2016-2019 deal.

Frank Schwabe, human rights spokesman for the Social Democrats (SPD), the junior partners in the German coalition, says most of the refugees want to "stay close to their country, in a secure place until the war ends" and that Turkey "is making an enormous effort and the European Union should continue to give funding in the future."

The Left Party's Heike Hänsel said "Turkey's aggressive policy" in Syria was part of the problem and warned the German government against making "dirty deals."

Sending migrants to the 'safe zone'

Eight years after the war in Syria began, Turkey is tiring of the crisis and President Erdogan wants to send the refugees to a so-called safe zone in northeastern Syria. But Syria expert Serhat Erkmen says there is "confusion" about Erdogan's statement. "Is it about sending 3.5 million Syrians in Turkey to the safe zone or just the new wave of refugees?"

If the fighting in Syria's last rebel-held province Idlib intensifies, the Turkish government fears a new humanitarian crisis, with at least half a million more refugees at Turkey's border. Currently, the population of Idlib is 3 million, half of whom have fled from other Syrian cities.

ESI director Knaus is skeptical about the idea of a safe zone, saying "Quite clearly, the ability to militarily protect any territory in Syria today and to guarantee that it will remain safe for the near future is beyond anything that Turkey or the European Union can provide at the moment."

Despite the controversy over a "safe zone" and the continuing blame game among international actors, European leaders' visit to both Turkey and Greece this week will reflect how badly they want to fix the EU-Turkey deal and to find a solution to the refugee crisis.