Lesbos: Hellish conditions for refugees in Moria | Europe | News and current affairs from around the continent | DW | 12.09.2019

The EU-Turkey deal may have reduced the number of people arriving through the Aegean Sea, but conditions for refugees on the Greek islands are going from bad to worse. The camp in Moria is overflowing with refugees. 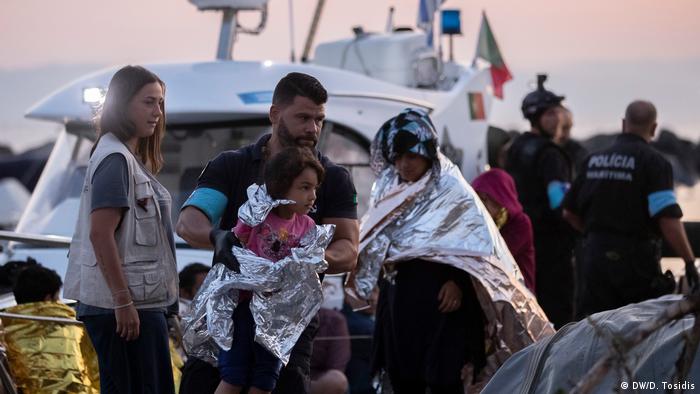 In the early hours of September 4, two dinghies landed on the northern shores of Lesbos carrying 81 people from Afghanistan: 22 men, 19 women, 40 children.

Several hours later Frontex, the EU's border agency, brought 40 people to the port of Skala Sikamineas; a small village in northern Lesbos where thousands of people pass through on their way to Europe. As they disembarked the boat their faces told a story of fear and exhaustion. Covered in emergency foil blankets they walked shivering towards the designated area in which volunteers distributed water and food and the authorities separated women and children from men in order to take them to Stage 2, a transit camp where people go before they are transferred to Moria. 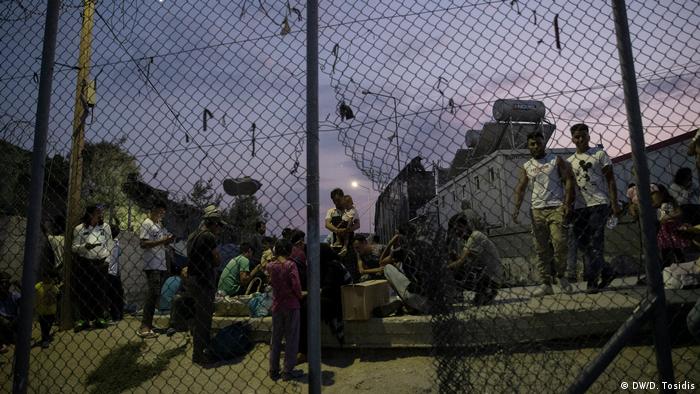 The population of Moria has exploded and conditions are deteriorating rapidly

Although the EU-Turkey refugee deal, signed in 2016, has helped to reduce the number of people making their way to Europe via the Aegean Sea, boats continue to arrive almost daily, and 2019 looks like being the busiest year since 2016. According to the UNHCR and the Aegean Boat Report, a social media page that reports daily boat arrivals, 26,078 refugees had arrived by sea in 802 boats up until September 1.

"The number [of arrivals] has increased substantially. If we look to May when Lighthouse Relief assisted only just over 70 people to the month of August when we assisted over 2,800 people, it's a big fluctuation in numbers and quite sudden," says Patrick Foley, Emergency Response Coordinator for Lighthouse Relief.

Even those working in Lesbos are not quite sure why the number of refugees has increased so suddenly. Most seem to agree that there are several factors, including the situation in Turkey and its insistence on suspending the re-admission agreement — including bilateral agreements with Greece — as well as the situation in the refugees' home countries. While in the past Syrians made up the largest number of arrivals in Greece, so far this year the majority have been from Afghanistan, accounting for 34% of the refugee population on the Greek islands.

"We're very interested in the situation in Afghanistan as a lot of our arrivals are from Afghanistan. The peace talks between the US and the Taliban, the ongoing attacks, the discussions about US troops being pulled out of Afghanistan, all that has a massive impact on people's willingness to stay," says Finn Sands Robinson, a field coordinator at Refugee Rescue, an independent humanitarian search and rescue organization which sometimes assists the authorities in sea rescues.

Moria: The failure of the EU's policies

Moria, Europe's most infamous refugee camp, is just a few miles away from Skala Sikamineas. Built on a hill among olive groves, it's surrounded by large cemented walls with barbed wire on top. Most of those who land in Lesbos eventually end up here, one of five reception and identification centers in the Aegean Sea.

These so-called hotspots were created as part of the EU's strategy in April 2015 to better coordinate EU agencies and national authorities in their management of the refugee crisis. However, following the EU-Turkey deal and the subsequent geographical restrictions for refugees that arrive through the Aegean Sea, the hotspots have been unable to cope with the number of people. Moria has a capacity of 3,000, yet there are currently more than 9,600 people in the camp, who are struggling to cope with often inhumane conditions.

The largest number of people live in tents in the so-called olive grove, just outside the main camp. Piles of rubbish are everywhere and there's a distinct smell of dirt and sewage in the air. Thousands of children, women and men, including people who suffer from various vulnerabilities and medical conditions, live in this squalor. 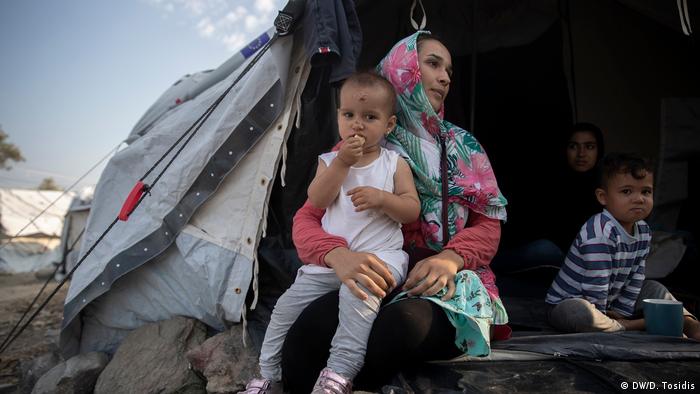 "I arrived a couple of weeks ago with my husband and my 18-month-old baby, Sana," says 23-year-old Saghar from Afghanistan.

"We're from Herat and we left because of the war and for a better future as we are educated. [Moria's] living conditions are inhumane. I am afraid as my family's tent is in an area where there are mostly single men who drink and shout throughout the night. My baby hasn't been able to sleep since we arrived."

A few tents below Saghar's, Khalid smokes shisha and sips tea with his friends: Khalid and his family of 10 came from Raqqa and [the eastern Syrian province of] Deir Ezzor. Khalid arrived in Moria only two days before DW met him, yet it's clear to him already that they have a long way to go before they can leave. The weather conditions are their biggest concern. Rain, snow, cold snaps. They're aware that the camp and the tents are not prepared for cold weather conditions.

"This is not a safe place," he said. "Going through what we went through is like living in a psychological war. Guess how old I am? I am 30 but I look much older."

Measures with no effect

The crisis in Moria is threatening to boil over. Doctors without Borders (MSF), who have set up a clinic opposite the main camp, describe the situation as an emergency — not only a medical one, but also psychologically. According to Katrin Brubakk, MSF's mental health activity manager, the contracts of the staff provided by the National Agency for Public Health have expired and left the camp with only one doctor. The hospital of Mytilene is overwhelmed and in some cases unwilling to treat patients. Brubakk says  there are people with severe medical issues, including a 10-year-old girl who required a kidney transplant and lives in a tent in the olive grove. In addition suicide attempts are on the rise both among adults and children.

Following the rise in the number of arrivals in Lesbos as well as persistent criticism from human rights organizations, the new Greek government transferred 1,400 refugees from Moria to mainland Greece and announced immediate measures to tackle migration, including plans to boost Aegean Sea missions by Frontex and NATO. More controversially, it wants to abolish reviews of rejected asylum applications — a measure that has been criticized by Amnesty International's Greek branch.

"[The solution to Moria] is a big political issue. Our main focus is on the medical part and at least what should be done is to evacuate all the vulnerable ones. And I know the mainland is crowded. The European countries should get together and find a solution," says Brubakk.