US President Donald Trump has called for an immediate halt to Turkey's strikes against Kurds in Syria as Washington slapped sanctions on Turkish officials. Vice President Mike Pence is set to lead a mediation effort. 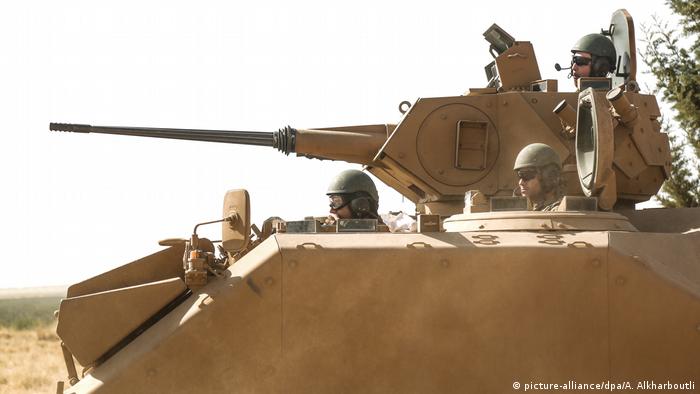 Washington is "simply not going to tolerate Turkey's invasion of Syria any longer," US Vice President Mike Pence told reporters on Monday. Pence said President Donald Trump had discussed the offensive in a phone call with his Turkish counterpart, Recep Tayyip Erdogan.

Trump "communicated to him very clearly" that the US wanted Turkey to "stop the invasion, implement an immediate ceasefire and to begin to negotiate with Kurdish forces" to end the violence in Syria, Pence said.

"The United States of America did not give a green light for Turkey to invade Syria," Pence told reporters in front of the White House.

Pence also said he would be leaving for the Middle East "as quickly as possible" to lead a mediation effort.

"We are calling on Turkey to stand down, end the violence and come to the negotiating table," he added.

Earlier, Trump slammed Turkey's actions in Syria as "dangerous" and warned that "targeting of ethnic or religious minorities is unacceptable."

"Turkey's military offensive is endangering civilians and threatening peace, security, and stability in the region," he said in a statement posted to Twitter.

Trump's reaction comes just over a week after he ordered US troops to withdraw from the Kurdish-populated areas in northeastern Syria. Days later, Turkey began moving troops across the border and launched its campaign against the Kurdish YPG militia, which Ankara believes to be a terrorist organization.

US to target 'current and former officials'

In his statement, Trump said he would be issuing an order to impose sanctions against "current and former officials of the Government of Turkey and any persons contributing to Turkey's destabilizing actions."

The measures later announced by the Treasury Department target the Turkish Defense Ministry and its head, Hulusi Akar, and the Energy Ministry and its minister, Fatih Donmez. Interior Minister Suleyman Soylu was also sanctioned. The sanctions freeze these entities' assets in the United States and generally prohibit foreign financial institutions from conducting financial transactions on their behalf.

Trump also pledged to raise steel tariffs to 50% and to halt talks on a $100 billion trade deal between Washington and Ankara.

"I am fully prepared to swiftly destroy Turkey's economy if Turkish leaders continue down this dangerous and destructive path," he said.

Trump's decision on steel tariffs brings them back to the level they were at during last year's spat between the US and Turkey over the fate of US pastor Andrew Brunson. The pastor was released last October, and Washington cut the tariffs to 25% in May.

Trump shared his official statement on Twitter following a series of contradicting posts on Syria. In one of them, he referred to Syrian leader Bashar Assad as "our enemy," and then said Assad and his allies would "naturally" want to protect the Kurds.

"Let Syria and Assad protect the Kurds and fight Turkey for their own land," Trump wrote.

"Anyone who wants to assist Syria in protecting the Kurds is good with me, whether it is Russia, China, or Napoleon Bonaparte. I hope they all do great, we are 7,000 miles away!" he added.

In his online posts, he also thanked Fox News contributor Katie Pavlich for her claim that Washington's European allies "didn't step in to deal with" the "Islamic State" (IS) jihadi group.

"Now, Angela Merkel of Germany is finally stepping up and telling Turkey to back off," Pavlich was quoted by Trump as saying.

Trump then slammed European countries for rejecting to take in former IS members as prisoners.

"They probably figured the US would bear the tremendous cost as always."

Trump has faced a slew of criticism over the pullout of US troops from Syria, which was widely seen as a signal to Turkish authorities to launch their military operation. On Monday, French President Emmanuel Macron also told Trump it was "absolutely necessary" to stop the resurgence of the IS group.

Alongside criticism from his political opponents and international allies, senior members of Trump's Republican Party have also voiced their opposition to the move.

Republican Senate leader Mitch McConnell has said the pullout "would recreate the very conditions that we have worked hard to destroy and invite the resurgence of ISIS," he said, using another name for IS. "Such a withdrawal would also create a broader power vacuum in Syria that will be exploited by Iran and Russia, a catastrophic outcome for the United States' strategic interests," he said in a statement cited by the AP news agency.

Russia has been pushing for the Damascus government to regain full control of Syria and for a political solution to the ongoing war there. But Turkey's intervention may only be a temporary setback for Russian interests. (14.10.2019)