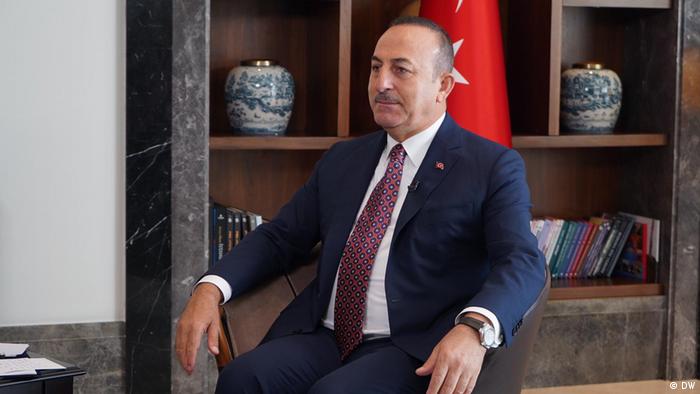 Just before the news broke that Germany was set to impose an embargo, DW spoke to Turkish Foreign Minister Mevlut Cavusoglu about just such a scenario.

DW: How would Turkey react if Germany were to impose a weapons embargo?

Mevlut Cavusoglu: No matter what anyone does, whether it is an arms embargo or something else, it just strengthens us. Fifteen years ago, we only produced 20% of the goods we needed. Now we produce over 70%. Even if our allies support the terrorist organization the YPG (the Kurdish-led Peoples' Protection Units), even if we stand alone, even if an embargo is imposed, no matter what they do, our fight is against a terrorist organization, and we will not back down in that fight for any reason. This is a vital matter for us, a matter of national security and survival.

DW: Turkish President Recep Tayyip Erdogan has requested that the EU not declare the operation in Syria an "invasion," saying, "otherwise our task is simple: We will open the doors and 3.6 million people will come to you." Is that a real possibility? How determined is Turkey in this position?

Cavusoglu: We have given a home to Syrian refugees in Turkey for years, and we guarantee Europe's safety in every sense of the word — and yet we get this reaction from Europe? They say "if the Syrians return there, we will not help them." But, so far, 370,000 Syrians have returned to the military zones for operations "Euphrates Shield" and "Olive Branch." So, they all want to go home now.

More than 300,000 Syrian Kurds have been exiled by the YPG, as well as many others, and the cities in the area where we are seeking to set up a protection zone are on average 90% Arab — controlled by the YPG. With the exception of Kobane, and one or two other small places, the majority of the population of these cities in not Kurdish.

However, the Europeans are acting like all of these areas are Kurdish and the demographics are about to change. The European Union says, to the people who want to return home, "I will not help." Therefore, President Erdogan and Turkey say, justifiably, "We have had these people here as guests for 8-9 years, and 90 percent of them want to go to European countries. If you do not want them to go to these areas, then please, you can take care of them. We have the right to say that."

So this option is completely on the table for the Turkish government?

Cavusoglu: Of course this option is on the table. Of course, we can't force Syrians to there. It would be a crime against humanity to force people to go to a place they do not want to go to. The priority is to keep the place they want to go safe. We fight so hard, and we stop these people, even though they want to go. We fight against smugglers. Now, they want to return to Syria. "But we will not help them return," says Brussels. If so, then, please host these people in your country. That is 3.6 million Syrians, and more than 4 million total refugees. So far, the Turkish state has spent over $40 billion and the EU has not given us the support we need. And now you do not want to help the people who want to return. The Syrians want to go to Europe anyway. "Then please take care of the Syrians in your own country" — it's our right to say that. It is not a threat and it is not a bluff. This is just the answer to an attitude of the European Union.

There is another topic that has affected relations between Germany and Turkey from time to time, that of exiled cleric Fethullah Gulen, and the branches of the Gulen organization in Germany and the Turkish-Germans that belong to it. Turkey has made demands over this issue. Were they fulfilled? What is the current state of affairs?

Cavusoglu: No, they haven't been fulfilled. Our countries worked well together during the tenure of Foreign Minister Sigmar Gabriel [from 2017-2018]. And we knew who the ringleaders of FETO [a Gulen movement organization considered terrorists by the Turkish government, which has held the organization responsible for a failed coup in 2016] in Germany were. German authorities also confirmed that Adil Oksuz [the alleged mastermind of the coup] was in Germany. Of course, we immediately made the necessary request for extradition. These days, Germany has taken some steps against the PKK [the Kurdistan Workers' Party, labeled a terrorist group by Ankara]. We welcome that. But that is not enough.

We can see the YPG and the PKK are also disturbing the peace in Germany — they are one and the same terrorist organization anyway. They may add new names, put on some makeup, but it's the same terrorist group. Germany is now beginning to recognize the problem. But so far, there have not been many German politicians who say they are terrorists. And now, some politicians even support the PKK. I'm not just talking about the Left Party. There are also some Social Democrats (SPD). The SPD leadership has admitted it. As well as (Foreign Minister) Heiko Maas. But Maas does not support the PKK, I know that, because we have had confidential discussions. Some steps have already been taken with regard to the PKK. We are satisfied on that front right now.

Yet, we are not where we want to be. So far, we have not seen any satisfactory cooperation between Germany and Turkey on the issue of FETO. On the contrary! FETO members from other countries have been coming to Germany. In Switzerland, for example, a court issued a deportation order for two PKK members. And both came to Germany. It is like a safe haven. They see Germany as a safe country, and so they go there. We expect sincere support, not just from Germany, but from other European countries as well. Unfortunately, there is also the matter of FETO-led schools outside of Europe being taken over by firms from the UK, Germany and France. This also reveals who supports and uses the terrorists, and how and why they do.

Mevlut Cavusoglu has been Turkey's foreign minister since November 2015. He is a member of President Recep Tayyip Erdogan's Justice and Development Party (AKP).

A Turkish artillery strike came close to hitting US troops stationed at an observation post in northern Syria. Turkey has continued to intensify its offensive despite the threat of US sanctions. (12.10.2019)