A Turkish artillery strike came close to hitting US troops stationed at an observation post in northern Syria. Turkey has continued to intensify its offensive despite the threat of US sanctions. 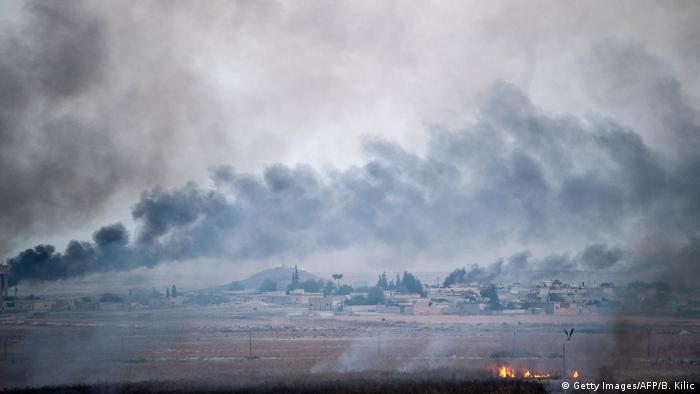 Turkey intensified its ground and air offensive on Kurdish positions in northern Syria overnight and into Saturday.

The Pentagon said that Turkish artillery fire landed near a United States military observation post located on the outskirts of the town of Kobane late Friday night.

"The explosion occurred within a few hundred meters of a location in an area known by the Turks to have US forces present," Navy captain Brook DeWalt said, adding that no troops were injured.

Although the US has withdrawn the majority of its forces from the Syrian-Turkish border, a small number of troops remain.

The Turkish government rejected the criticism as "black propaganda" and vowed to push ahead with the military operation.

More than 100,000 people have been displaced as a result of the Turkish offensive – 65,000 of them from the Turkish-Syrian border town Ras al-Ayn – according to the UN World Food Program.

"More people are leaving on a daily base and those numbers will go up," the UN agency said.

In a statement late Friday, Turkey's Defense Ministry said it did not open fire on the US facility and said it struck a Kurdish position after a Turkish one had been attacked with machine guns and mortar fire 1 kilometer (1,100 yards) from a US observation post.

The statement added that Turkey ceased firing after being contacted by US officials.

US officials said US troops left the post after it came under fire. It is the first time a coalition base was in the line of fire since Turkey's offensive began.

"The US demands that Turkey avoid actions that could result in immediate defensive action," DeWalt said.

On Saturday, the Turkish military claimed that it had taken control of Ras al-Ayn.

The Turkish Defense Ministry tweeted in English that "the town of Rasulayn, located east of the Euphrates, has been brought under control."

The Kurdish-led Syrian Democratic Forces have denied Turkey's claim, saying some of their fighters had made a "tactical retreat" from one neighborhood. The Britain-based Syrian Observatory for Human Rights, an opposition war monitor, confirmed that Turkish troops had entered the town, but said that fighting was still ongoing.

The United Nations on Friday said 100,000 people had been displaced by Turkey's operation, with the World Food Programme (WFP) warning of a impending humanitarian crisis in Syria's border region.

The Observatory said 10 civilians were killed on Saturday in a Turkish air strike in the region, taking the civilian death toll from the offensive to 28.

US could 'shut down' Turkish economy

Earlier Friday, the US warned that Ankara could face "powerful sanctions" if its operations targeted civilians.

Speaking at the White House, US Treasury Secretary Steven Mnuchin said that the US could "shut down the Turkish economy" if Ankara goes too far.

Mnuchin emphasized that although sanctions had not yet been activated, the US Treasury would be putting financial institutions on notice that measures "targeting any person associated with the government of Turkey, any portion of the government," could be possible.

Read more: Should Turkey fear the long arm of US sanctions?

In response, Turkish Foreign Ministry spokesman Hami Aksoy said that "no one should doubt that we will respond in kind against each step to the full extent of reciprocity."

Aksoy said the Turkish operation would proceed "with determination" in fighting "terrorist organizations" that are a threat to Turkey's national security.

Kurdish forces in northern Syria have been a US partner in the fight against the jihadi group "Islamic State," but Turkey considers them to be terrorists linked to a Kurdish insurgency at home.