Should Turkey fear the long arm of US sanctions? | Business | Economy and finance news from a German perspective | DW | 10.10.2019

Should Turkey fear the long arm of US sanctions?

Donald Trump has threatened to "totally destroy and obliterate" the Turkish economy, should Ankara overstep its campaign against Kurdish forces in northern Syria. So will Erdogan have to take Trump's bluster seriously? 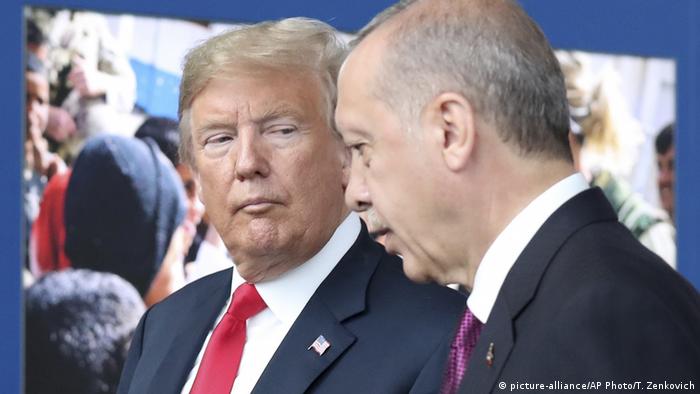 It wouldn't have taken multiple tweets and statements by Donald Trump earlier this week to show that the US policy in Syria and the wider Middle East is in a state of confusion. As the US president appears determined to bring US troops home, he's basically given Turkish President Recep Tayyip Erdogan a free hand in his campaign against Kurdish forces in northern Syria, which were once strong allies in Washington's fight against IS militants.

Yet, following massive pressure from Congress and the Pentagon, Donald Trump backpedaled somewhat on Monday, warning Ankara that if Turkey did "anything outside what we think is humane" the country would "suffer the wrath of an extremely decimated economy."

The statement made at a news conference in the White House was already a toned-down version of a Trump tweet on Sunday, in which he threatened to "totally destroy and obliterate" the Turkish economy.

A bipartisan group of senators in the US has meanwhile suggested legislation that would freeze all US assets of Turkey's leadership, including Erdogan, and impose sanctions on entities that do business with Turkey's military until Ankara withdraws from Syria. The bill would also impact foreign military sales to Turkey. But what will the US president decide?

In sanctioning foreign states, Trump typically acts without prior notice or any attempt at serious negotiation. His modus operandi is becoming familiar: shout, threaten, punish. Then comes a supposedly magnanimous offer to talk one on one, as happened with North Korea and the EU.

So President Erdogan may not really be puzzled by Trump's recent statements, guided by the US president's "great and unmatched wisdom."

Although the Turkish currency, the lira, slumped the most since August following Trump's tweets, Erdogan's ability to avoid massive economic consequences from the recent breakdown in bilateral relations has been remarkable so far. This year, he's been able to evade threatened penalties over Ankara's purchase of a Russian missile defense system and a multibillion-dollar scheme to skirt sanctions on Iran.

Last year, the Turkish president even flouted US sanctions over Ankara's detention of an American pastor, Andrew Brunson, who was later released. Erdogan ordered reciprocal sanctions against two American officials, saying: "Those who think that they can make Turkey take a step back with ridiculous sanctions have never known this country or this nation."

Tensions between the two NATO allies have already extended into trade. In March 2018, the Trump administration imposed tariffs of 25% and 10% on steel and aluminum imports from most trading partners, including Turkey. In June, Turkey responded by imposing duties on $1.8 billion (€1.64 billion) in US goods including coal and paper.

On balance, though, bilateral trade is too insignificant for higher tariffs to really hurt either side. According to latest data available, US goods and services trade with Turkey totaled $20.5 billion in 2018, making it America's 32nd-largest trading partner.

Although goods and services trade may appear modest, Turkey could ill afford new US sanctions right now. Its currency has plummeted nearly 40% over the past two years. And in 2018 the Turkish economy saw a deep recession from which it's only just beginning to recover.

At the moment, the United States has imposed close to 10,000 individual measures under its current "active sanctions programs" affecting 31 countries and political groups. Sanctions are appealing to the Trump administration as a cudgel sharper than talking but gentler than military action. Their use has exploded in the 21st century, especially as the US has become very good at tailoring financial penalties.

The strength of America's "money wars," as they are dubbed, derives from the centrality of the US financial system in the global economy and the dollar's status as the world's dominant reserve currency. Even a company that has basically no trade in the US, its banks do. And so the company basically loses financial support if it's trading with a country that has been targeted with US measures.

Moreover, the US dollar accounts for more than 60% of the foreign currency reserves in the world as the currency is used for trading in oil and gas and a wide part of the global trade in goods. As a result, the US Office of Foreign Assets Control (OFAC) can assert jurisdiction over any US dollar transaction because, eventually, that dollar must clear through the US banking system. So every dollar transaction can be traced back to a foreign bank account, or individual parties, and be blocked.

To borrow a 1971 phrase from former US Treasury Secretary John Connally, "the dollar is our currency but your problem."

So if really followed through, US sanctions against Turkey, indeed, would have the potential to severly impair the country's economy.

On the other hand, sanctions rarely work when a country's core national interests are felt to be at stake, causing the targeted government to double down on its recalcitrance.

For example, stiff sanctions that damaged Russia's economy following the 2014 takeover of Crimea failed to lead Moscow to return the peninsula and end its support for separatists in Eastern Ukraine. Similarly, Iran has been unwilling to make concessions on its missile program or support of proxies despite crushing sanctions that shrank its GDP by 6% last year. And the Nord Stream 2 pipeline connecting Germany and Russia appears to be moving forward despite Trump's threats to sanction the companies involved.

The US Treasury Department recently said that, even as the number of sanctions has increased, their success is measured not by volume but by their impact in achieving specific policy goals. What the US president has achieved with his money war on Turkey so far is closer ties between Ankara and Moscow and Teheran.