Turkey has remained defiant in the face of international criticism, insisting the military will push forward with its incursion. The UN has warned of an impending humanitarian crisis as thousands flee to safety. 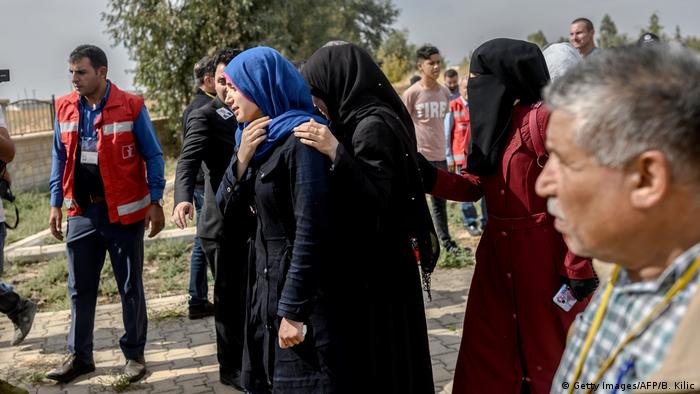 The United Nations on Friday said 100,000 people have been displaced by Turkey's incursion into northeastern Syria. Turkey has vowed to push forward with its offensive targeting Kurdish forces in Syria despite continued international criticism.

Some half-million people are thought to be at risk in the two countries' border region. The World Food Program (WFP) has warned of an impending humanitarian crisis, something Ankara has dismissed as "fabricated in order to discredit Turkey's counterterrorism efforts."

The provinces of al-Hassakeh and al-Raqqa were expected to be the hardest hit by the shelling.

Some 32 Kurdish militiamen have been killed in the Turkish campaign, the UK-based Syrian Observatory for Human Rights (SOHR) said on Friday, while Ankara claimed it had killed 342 fighters.

At least six Syrian civilians, seven Turkish civilians and four Turkish soldiers have also been killed in the three-day offensive.

"The operation is going as planned," said Turkish Defense Minister Hulusi Akar on Friday. "We are being extremely careful to ensure no civilians are harmed."

The UN's World Food Program (WFP) said that 70,000 people have been forced to flee the provinces of al-Hassakeh and al-Raqqa due to the Turkish onslaught. Turkey had slammed the warning of an impending humanitarian crisis as "fabricated in order to discredit Turkey's counter-terrorism efforts."

On Friday morning, thick columns of black smoke could be seen billowing out of the Syrian border town of Tal Abyad as Turkish forces bombarded the area. The Turkish border town of Suruc was also hit by shelling.

Trump under fire over US withdrawal

US President Donald Trump has been accused of greenlighting Turkey's campaign against the Kurds when he made the sudden decision to withdraw American troops from the border region, effectively abandoning the Kurdish allies that played a major role in defeating "Islamic State" (IS) terrorists.

Trump's move has been criticized not only by opposition Democrats, but by his own Republican party, and many other countries around the world. The decision has also threatened to seriously damage the US' reputation as a military ally.

The Pentagon has also cautioned that the withdrawal could allow IS to once again build up strength. Today, the Defense Department added that there is "no indication" Turkey would be willing to stop the offensive.

Fighting back against accusations that they left allies in the lurch, Defense Secretary Mark Esper told reporters: "We have not abandoned the Kurds, let me be clear about that. Nobody green-lighted this operation by Turkey, just the opposite. We pushed back very hard at all levels for the Turks not to commence this operation."

The US president said he was entrusting Turkey with the fight against terrorism, allowing Turkish President Recep Tayyip Erdogan to fulfill his longstanding desire to crush the Kurdish forces, all of whom Ankara labels as "terrorists."

In Turkey, government forces have been engaged in an on-and-off conflict with armed Kurdish Turks for decades, and the Kurdistan Workers' Party (PKK) is banned as a terrorist organization.

However, many doubts have been raised over Turkey's capacity to handle the terrorist problem in neighboring Syria, despite President Trump voicing his confidence. On Thursday, Russian President Vladimir Putin said he simply did not believe Ankara had the necessary resources and know-how, which he worried would embolden remaining IS fighters.

The fears of both Putin and the Pentagon were realized on Friday, when a car bomb killed three people in the Syrian city of Qamishli. IS later claimed the attack, one of several it has carried out in the Kurdish city in recent months.

Friday's attack occurred as many Kurdish guards were forced to leave their posts in parts of the city to defend themselves against Turkish forces.

The car bomb targeted a restaurant at a time when civilians, including journalists who came to cover the offensive, were inside, according to the Kurdish internal security services, known as Asayish, in a statement.

There were also reports on Friday that five IS prisoners had managed to escape a Syrian prison due to Turkish shelling.

Germany and the European Union are among many voices speaking out against the Turkey's military invasion of northern Syria on Wednesday. World powers are deliberating how to respond. (10.10.2019)

Western nations slammed Turkey's Syria incursion at the UN, but the Security Council failed to agree on a statement. Russia says it wants the "illegal military presence" of other nations to be addressed in any document. (10.10.2019)